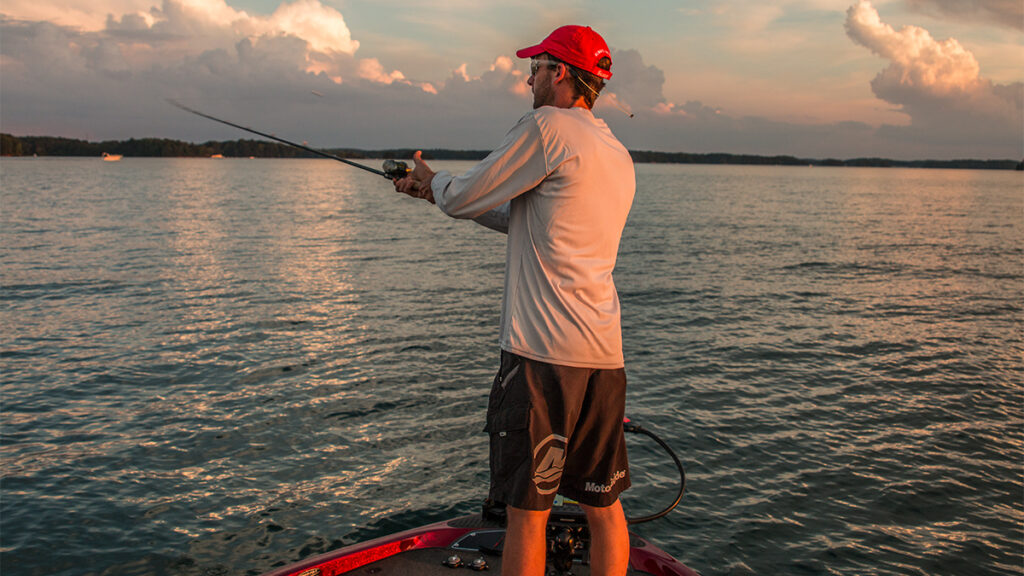 I know swimming a worm in grass is a fairly well known technique in certain areas of the country but I don’t think we (myself included) do it enough. You’ll hear a lot about this technique regarding Florida lakes but throughout the rest of the country, I really don’t think a lot of folks do it. And when we finally try it, we have the idea that we have to do it around vegetation.

Sure, that’s a heck of a pattern in some places. But don’t be afraid to swim a worm, such as a Zoom Ultravibe Speed Worm, around hard cover, too. When the water temperature is in the high 50s and low 60s, I love to cast a swimming worm with a 1/16-ounce weight around laydowns, stumps and even dock posts near the mouths of south-facing short pockets. As the bass first begin their shallow migration, they can be a little stubborn for the first few days especially.

With everybody pitching and flipping bottom-contact baits, I’ve found that swimming a worm can be an excellent alternative when the bite is tough. Often times when bass don’t bite well, it’s because they’re suspended in the water column and they simply watch our bottom-contact baits fall right in front of their noses. I’ll cast this swimming worm, however, past the piece of cover and reel it slowly through the top-half of the water column while lightly bumping it into cover in an attempt to appeal to these stingy fish.

It’s important to understand that your bites aren’t likely going to be anywhere near as noticeable as a traditional Texas rig hopped along the bottom. Most often, your swimming worm bites are going to feel like a slight tick or it might even feel like someone cut your line as the bass attacks the worm from behind and creates slack in the retrieve. I guess I would equate it to a small swimbait bite, if I had to choose. So when you feel something “different” throughout your retrieve, reel a bit faster until your rod tip loads up and gets heavy before executing a sweeping, crankbait-like hookset.