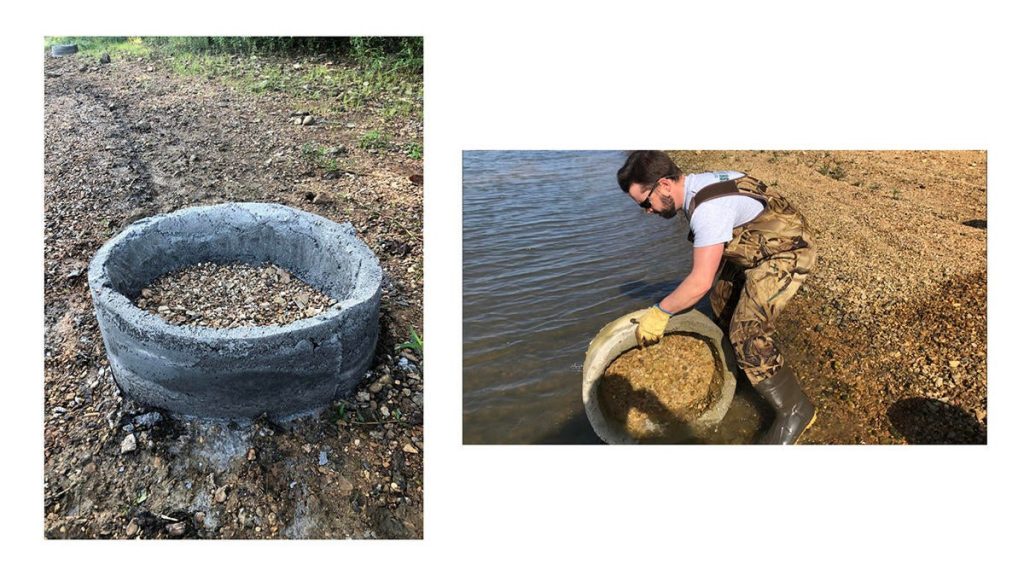 Martin believes habitat is the thing we can impact the most at relatively low cost to provide for better spawns and better bass populations. Although he readily admits habitat can’t be tested effectively to know for sure if it’s the largest contributing factor on spawns.

So the question is what is ideal for improving spawning success with habitat?

“A study done in Arkansas showed that fish prefer to spawn in less than 10 feet of water, on fine or coarse gravel, usually near simple structure like a laydown or a stump,” Martin said. “They don’t like spawning structure that is too complex because it will be attractive to nest predators. Usually 30 feet apart is best, so there is not as much fighting between the males.

“Kentucky Lake had an abundance of button bushes. Erosion and floods have left button bushes confined to 358 feet above sea level or higher elevations with summer pool being 359. So there is just not much cover until the lake is at summer pool. There is a lot of open shoreline and few button bushes in the very back. It doesn’t get good for habitat until 359.”

“That’s an issue for Kentucky Lake. In a typical year, the button bushes and the best cover don’t get flooded until about 64 degrees. So that’s not ideal because we want them to be able to spawn earlier. So we have been purposefully adding habitat designed for bass spawning at lower elevations so that it’s available in that pre-summer pool period. We’re putting in cypress trees, spawning benches, and artificial beds on both lakes.

What all this should do is spread fish out and provide more fish spawning opportunities regardless of water level. Theoretically, it may even encourage more bass to spawn earlier in the year.

Kentucky Lake and Lake Barkley are massive fisheries and the local Kentucky Fish and Wildlife district’s habitat materials budget is small ($3,500 for both lakes in 2020), but a cooperative grant with the Corps of Engineers to which Wired2fish is a partner of, is providing $30,000 of funding to put a lot of cover into Lake Barkley to increase spawns and bass recruitment. TWRA is doing a large part of the work as well. More than 1,000 cypress trees, 320 shallow water attractors, 1,200 laydowns and 450 artificial spawning beds will be added in just the first year.

The funding is provided by the Reservoir Fisheries Habitat Partnership, which is a federal program designed to increase funding for fish habitat while bringing together different government agencies and concerned groups like fishing clubs and small businesses. Additional partners include local hardware stores like Akridge Farm Supply, as well as the U. S. Forest Service, the Kentucky BASS Nation, the Kentucky Bassmasters club, the McCracken County High School Bass Fishing Team, and the Murray State Bass Anglers college team.