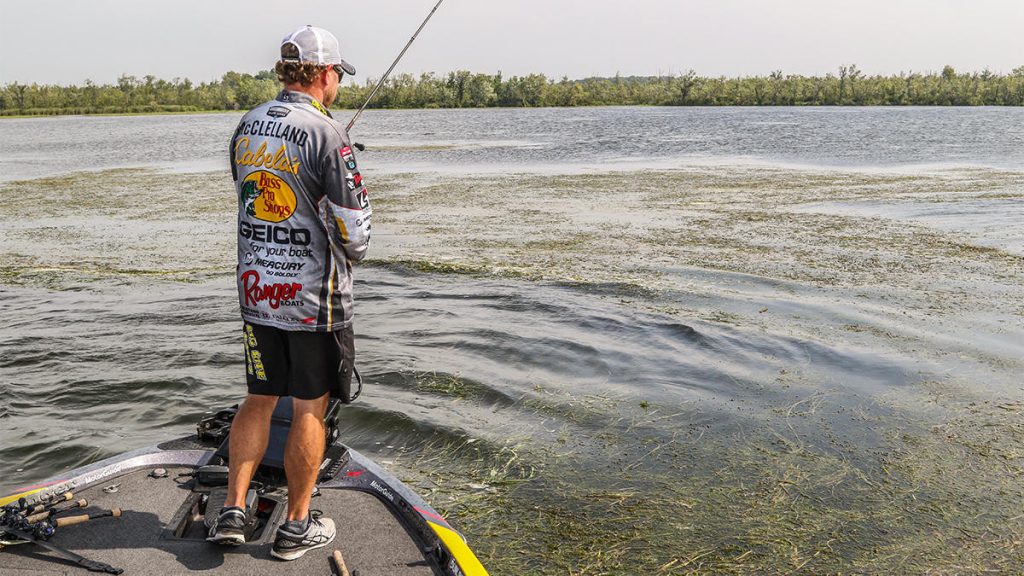 For Mike McClelland, avoiding the thickest of the cover isn’t so much about lack of confidence in its potential; rather, it’s simply a matter of time management.

“Any time you get into a lake flooding and you have massive amounts of bushes or willow trees or whatever the available cover might be, my goal first and foremost is to find the most isolated cover that I can get to,” he said. “I want to give myself the best odds of knowing that when I pitch by a target, there ought to be one there; rather than picking my way through hundreds of bushes for scattered bites.”

So, not only does he avoid wasting time on large areas of less productive cover, McClelland can afford to spend more time on what he believes are the prime spots typically staked out by the bigger, more aggressive fish.

“Stacey King told me years ago, one of the biggest problems a lot of us anglers make is that we fish too fast to catch big ones,” he said. “Big ones are lazy; they don’t want to work hard to eat and I definitely believe that isolated targets aren the perfect place to catch big ones because they want to be able to set up be something that gives them security to feed without a lot of effort.”

McClelland said the sweet spots could vary from day to day and, at times, it’s a matter of determining if the fish are lovin’ the hardwoods or some other type of cover. On a weedy flat with a dominant grass mat interspersed with patchy of pads, reeds or even a different type of grass – coontail patches amid mostly hydrilla – those outliers can be the golden ticket.

Notwithstanding the notion that isolated spots tend to interest the heavy hitters, any change in cover distribution, be it live vegetation growth or standing timber, generally relates to the kinds of bottom variations that influence fish movement. McClelland keeps his eye on his Garmin Panoptix, but surface level observations only strengthen his recon.

“I break down the bushes, trees, grass, whatever it may be just like I would the natural contours of the lake,” McClelland said. “I’m going to fish the ditches, the points, the pockets; rather than just going down a long, straight stretch of bushes or willow trees. I’m going to pick out the irregularities.”