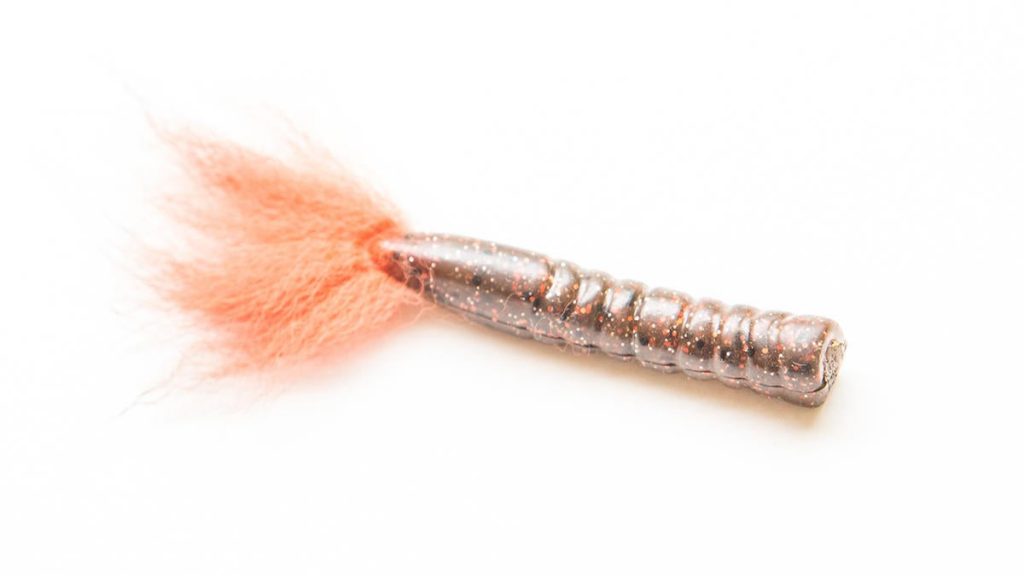 In 2016, Rabid Baits of Poultney, Vermont, slowly and meticulously began to design and create prototypes of several unique finesse baits. By 2019, they had created four soft-plastic finesse baits that were adorned with pieces of rabbit zonker.

These four baits are called the Darter, Goby, Rabid Craw, and Shaker Worm.

Rabid Baits most recent creation is called the Fox Tail, and they mailed us some samples of it to work with, thoroughly examine and eventually publish a gear guide about it.

Here is what we discovered about the Fox Tail.

It is a novel stick-style bait. In fact, it is so novel that some of its facets are difficult to describe.

For example, in some Midwest finesse anglers’ eyes, it abstractly represents the features of a small fish. While in the eyes of some other Midwest finesse anglers, it abstractly represents the features of a crayfish, and these anglers contend that the strands of rabbit fur are imaginary claws or chelae of a crayfish. From the perspectives of others, these multi-faced features will accentuate its versatility and effectiveness.

The samples exhibit slight variations in their lengths. For example, the lengths of their soft-plastic torsos range from 1 15/16 inches to 2 inches. The lengths of the rabbit fur that radiate from the two sides of the tip of its torso fluctuate from being 2 1/4 inches to 2 9/16 inches long.

Its soft-plastic torso possesses a cylindrical shape. And its sides, dorsal and ventral areas are identical.

The portion of the torso that dons the rabbit zonker possesses the shape of the head of either a logperch or a slenderhead darter. But one Midwest finesse angler described the shape as being similar to the head of a snake that is adorned with “a heck of a beard.” This section ranges in length from 3/4- to 13/16-inch long. At its widest spot, it is about 7/16-inch wide and a circumference of about 1 1/4 inches. The width and circumference of this section diminish as it approaches the area where the rabbit fur is attached, where it has a width of about 1/8-inch and a circumference of about 11/16- inch. The epidermis of this section of its soft-plastic torso is smooth.

The next 1 1/4 inches of its soft-plastic torso is cylindrical-shaped and segmented.

The tip of this section of the torso is flat with a diameter of 7/16-inch and a circumference of about 1 1/4 inches and this is where Midwest finesse anglers will insert the hook and bait keeper of their mushroom-style jigs.

Midwest finesse anglers are inveterate customizers of soft-plastic baits, and many of them will shorten it by trimming a segment or two from the tip of the torso.

It is neutrally buoyant.

Bob Scott Sr., Bob Scott Jr, and Joshua Mossey, who are co-owners of Rabid Baits, told us that the prototypes of their Fox Tail exhibited a flair for inveigling a variety of fish when it was field-tested. In various freshwater applications, it caught crappie, lake trout, largemouth bass, smallmouth bass, walleye, and several other species. And Mossey used it in saltwater to catch redfish and speckled trout.

You can find the Rabid Baits Fox Tail here.