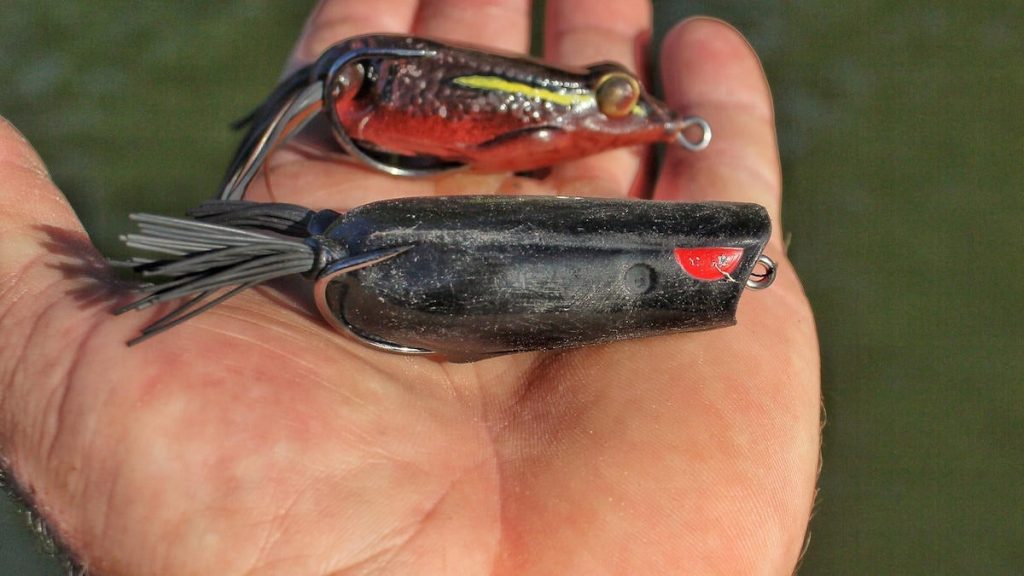 There comes a time each spring when I basically turn to a popping frog the rest of the way through the spring and into the summer. Once the water stabilizes above 70 degrees, I like to start leaning heavily in a popping frog’s direction. The fish are almost all off bed by then, they’re somewhat aggressive and in dire need of a big meal to help recoup from the spawning process.

It’s times like these when a popping frog works so well in something like a lily pad field, for example. It has the drawing power to pull a fish to it from 15 to 20 feet away and the ability to stall out between pops so the fish has time to zero-in and annihilate it. There are few sweeter things you can experience on the water than a 6-pounder throwing a 3-inch wake as it bangs its way through pad stems on a crash course with a little chunk of hollowed out plastic on the end of your line. For there’s a sweet, sweet moment of madness that follows.

Once the fish get this aggressive, I rarely fall back to a walking frog. Even if some of the fish aren’t committing to a popping frog all the way on the initial bite, I still find it’s better to stick with a popping frog over a walking frog and just have a follow-up bait rigged up to go back in after the fish. What’s usually the case in these situations this time of year is that the bass that swirled on my frog is guarding fry. So it wouldn’t have likely eaten a walking frog either, but instead swatted at it defensively the same way it did the popping frog.

A popping frog simply allows you to cover more water. I’ll often still fish it a little slow, but it draws fish in better. So that means that each cast doesn’t have to be as close to the last. You can spread your offering out a little more and cover water a little faster that way. Of course as the bass spawn winds down, you have the shad and bream or bluegill spawns happening and there’s just so many things about that time of year that scream popping frog to me. I’ll still fall back to a walking frog at times, only if the cover is so thick that it absolutely demands it, but 95 percent of the time as the spawn winds down I’m picking up the popping frog.

As the summer gets ramped up, I’ll keep the popping frog in hand and start perusing the backs of pockets looking for those bluegill that are trying to spawn and will continue to do so throughout the summer. Then another golden opportunity for the popping frog comes along for some of us each year as the mayflies start to hatch; I haven’t found a better bait on the planet for that situation. Sure, you could catch some and probably several of the same fish on a walking frog, but again it all comes down to which is the most effective at getting the most bites. That’s the whole name of the game with the popping versus walking dilemma.