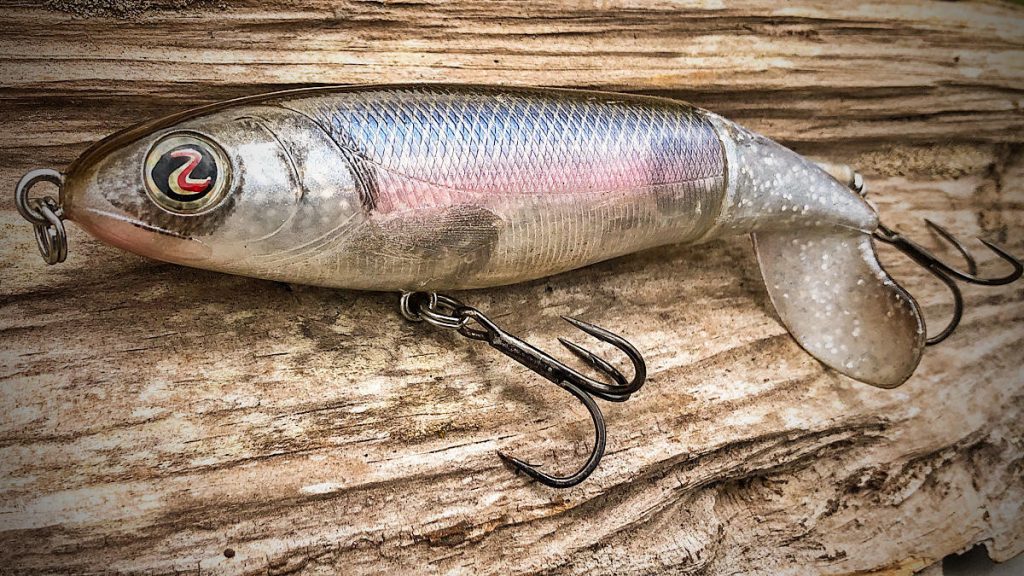 As far as I know, River2Sea was first on the scene with this type of large prop tail bait so I pay homage to them here by referencing the River2Sea Whopper Plopper. But there are a few other baits like this out there now too like the Berkley Choppo that all have a little different sound to them. Whichever you prefer, this style bait is extremely effective for pursuing shallow summer bass and there are two major reasons for that.

It can be cast long distances and has an aggressive sound.

Having a bait with which you can cover a lot of water when fishing shallow in the summer is a must. Though the fish are often big, they are also often few and far between. So you need a bait at times you can cast a long way and parallel the shore with. The constant and loud sound of this type bait also helps fish hear it from afar and track it down. So you’re able to again cover lots of water not only by casting a long ways but also by calling a fish in from a larger area with each cast.

I use a fairly large rod with a Whopper Plopper paired with 40-pound test Sufix 832 Braid and a Lew’s Super Duty Speed Spool LFS Casting Reel in 7.5:1 gear ratio. It’s not a bad idea to go with the even faster 8.3:1 reel so that you can burn the bait back at the end of a cast and fire out again; you just have to be careful not to reel the bait too quickly on the retrieve, though. As for the rod, a 7-foot, 8-inch medium-heavy Fitzgerald Vursa Series Casting Rod will launch a Whopper Plopper and horse big ones to the boat really well.