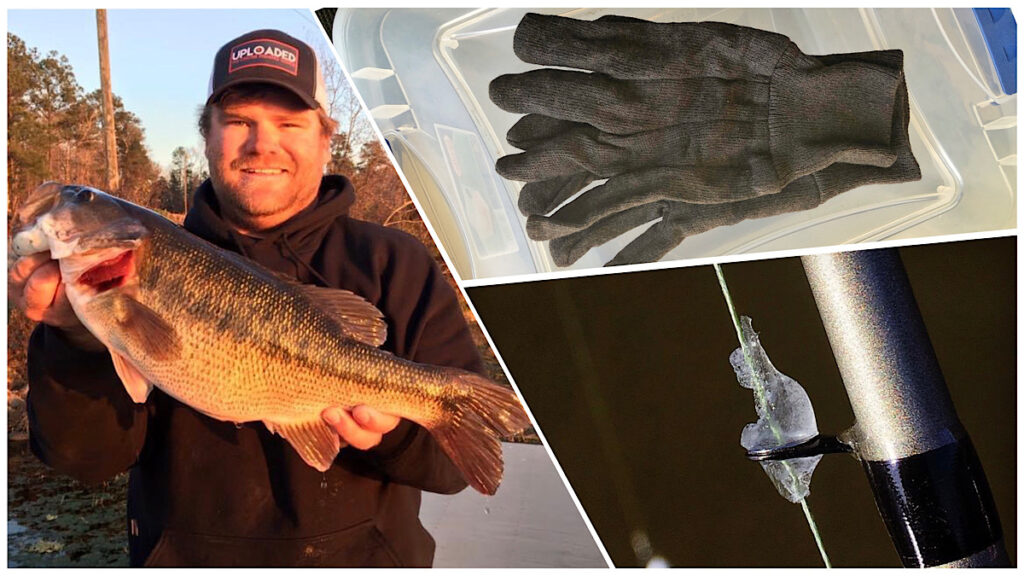 Another of my best days on the water came just a few years ago on Lake Jordan here in Alabama. Though it didn’t snow that day, it was bitter cold and the conditions were pretty nasty. I went out and braved the bitterness, with my reward on the backside being over 22.80 pounds of spotted bass.

That was, and still is, the biggest five-fish limit of spots I’ve ever caught and that bag included my biggest spot to date, one weighing 5.43 pounds. Similarly to Lake Guntersville on that last day, the big bites were abundant. I could have probably had another five-fish limit close to 20 and another still over 18 pounds. There were so many spots over 3 1/2 pounds biting that day it was unreal.

I had most of what I weighed by about 8 o’clock that morning. Though the conditions were pretty brutal on my body, the biggest hindrance to the fishing came in the form of my rod guides freezing up; about every five minutes, I’d have to pick, pop and poke ice out of my frozen guides to free my line up again. It helped a little to dunk the top half of my rod in the water between casts. This slowed the freezing down a little and kept those last few guides that are the smallest from freezing up so fast. But still, it was a battle for the first few hours just to keep my bait in the water. I have since learned that line conditioner or even cooking spray like PAM can help to prevent or at least slow this down.

Another hack I’ve found to make those bitter cold days more bearable is to buy a pack of cheap polyester/cotton work gloves—the ones you can get at a gas station in a five-pack for a few bucks. These are especially helpful on days with snow, sleet or rain. I can still feel my rod well through these gloves but they keep my skin from making direct contact with the rod grip. As a pair starts to get pretty wet, I just peel them off, toss them in the rod locker and slip on another pair. I may go through five pair in a day and then when I get home I’ll just lay them all out to dry and reuse them on the next trip. But I will add, these gloves aren’t for running from spot to spot, you’ll want some beefier gloves while you’re driving the boat.

One last cold-weather tip I learned from my dad. He has diabetes, so his hands and feet can get miserably cold. But he also has a good set of eyes and saw the 22 pounds of spots I caught that day and had to get in on the action. We went back to fish a tournament shortly thereafter and pops brought a can of Sterno heat and put it in a bucket so that he could warm his hands intermittently throughout the cold morning, which I thought was a pretty cool idea. HotHands hand warmers also come in clutch when it’s super cold.

Above all else, however, remember to be extra safe if you choose to go fishing this time of year. If you’re in a boat, wear a life jacket… the whole time. It’s also a good idea to take an extra set of clothes and something to start a fire with in the event you fall in the water.