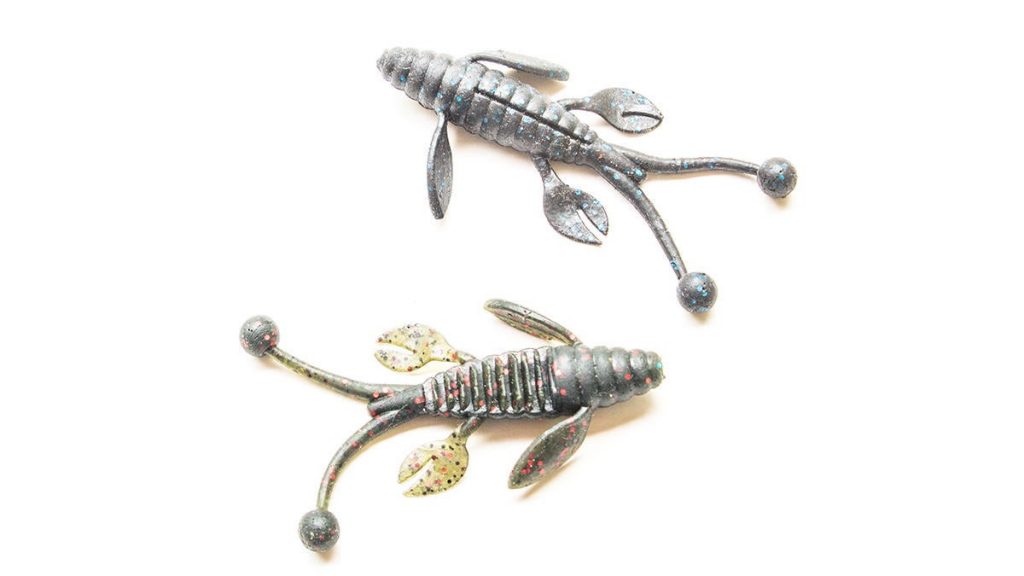 The Puddle Jumper was the creation of yhr late and great Chuck Woods of Kansas City, Missouri. And in the early 1970s, it was our first soft-plastic and finesse-size creature-style bait, which we used to catch untold numbers of black bass, crappie, and white bass.

When Molix introduced their 21st-century finesse-size creature-style bait, it immediately caught the attention of several of the old-time aficionados of the Puddle Jumper, and they provoked us to correspond with Paolo Vannin of the Molix USA Corporation of Sewell, New Jersey, in hopes that we would publish a gear guide about the Freaky Flex.

To our delight, Vannin provided us with some details about it and a few samples to work with.

Here is what we discovered about the Stick Flex.

Molix is an Italian company that is headquartered in Molinella, Bologna, Italy.

Their Freaky Flex is manufactured with a material that is called MOLIX FORMULA, which is an extremely buoyant, flexible, and durable soft-plastic compound. It is durable enough to endure numerous donnybrooks with largemouth bass, smallmouth bass, and spotted bass.

It possesses some of the features of a fish, crayfish and an array of aquatic invertebrates.

According to our measurements, it is 2 15/16 inches long.

At its widest spot, its posterior has a width of about 3/16-inch.

The dorsal portion of its posterior is embellished with 14 ribs or segments. It is also endowed with a hook slot that is 7/8-inch long, and this slot stretches from rib number seven to rib number 14. The dorsal is convex.

The fourth rib from the end or the anus of the posterior has a width of about 5/8-inch and a circumference of about 1 1/4 inches.

There is an appendage radiating from each side of the fifth rib. These appendages have an elliptical shape. They are thin and flat with a length of 3/4-inch, a width of 5/16-inch at their widest spot and a thickness of about 1/16-inch. They are somewhat similar to the pelvic fins of a greenthroat darter and slenderhead darter.

At the seventh rib, its posterior has a width of about 7/16-inch and a circumference of about 1 1/2 inches.

An appendage extends from each side of the eleventh rib. They are an abstract rendition of a crayfish’s claw or cheliped. They are flat and thin with a length of 3/4-inch and a width of 5/16-inch at their widest spot. They are less than 1/16-inch thick.

At the fourteenth rib, the torso has a width of about 1/4-inch and a circumference of about 3/4-inch. This rib is situated at the junction of the torso and the Freaky Flex’s head.

The posterior section’s ventral area is embellished with six convex ribs, which are identical to its dorsal’s ribs. They encompass 3/4-inch of the ventral area and they are adjacent to its anus.

The ventral’s next 7/8-inch is adorned with a feature that Molix calls micro-flaps and there are nine flaps. These flaps are thin with a height of slightly less than 1/8-inch. The gap or distance between each flap is about 1/16-inch. The first one has a width of 7/16-inch and the ninth flap, which is adjacent to the junction with the Freaky Flex’s tail, has a width of about 3/16-inch. This micro-flap portion of the ventral is flat rather than convex.

The anterior section consists of a small head and an antenna radiates off each side of its head.

The head is about 7/16-inch long and 3/16-inch wide at its junction with its posterior section. The tip of the head has a width of about 1/8-inch.

They are impregnated with salt and a shrimp scent.

You can find the Molix Freaky Flex here.