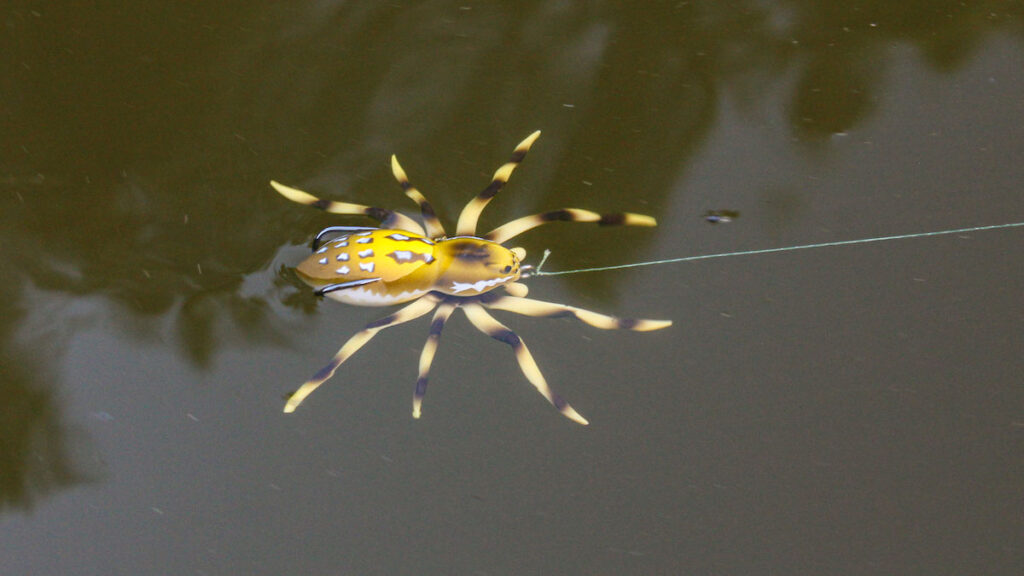 I was actually sold on this one a while before I ever even tried it. I watched a video of this thing with some closeup slow-motion footage and it is one of the most realistic-looking baits I’ve ever seen in the water. You should really check out this video in particular if you’ve never seen it. It shows the insanely realistic movement of the legs of the Phantom Spider, one of the nastiest baits I’ve ever seen in the water.

But, I’ve seen videos of other baits similar to this before and not been all that impressed with a bait when I later tried it. So, I sampled the Phantom Spider for myself and was quite impressed. One of the most shocking things about this lure is its castability. With the flailing legs catching air, I figured this bait would be hard to throw. But it actually casts really well, both in distance and accuracy. I was also using the smaller of the two sizes which comes in at only 1/4 ounce, throwing it on a 7-foot, 2-inch casting rod with 40-pound braid pretty easily. Downsizing to a 7-foot, medium-heavy rod with 30-pound braid would increase the distance and accuracy even further.

The bait is also super easy to fish while still creating a crazy good action. You don’t walk this bait like many other hollow-body baits. Instead, you just twitch it along in a straight line and the legs contract and relax, making it appear as though the spider is crawling across the surface of the water. It’s best to keep your rod tip up when working the bait and the bait has a tendency to land upside down every now and then. But the weighted belly rights the bait within a couple twitches if this happens and you’re good to go. Lastly, the double frog hook in this bait is solid and capable of handling big ones.