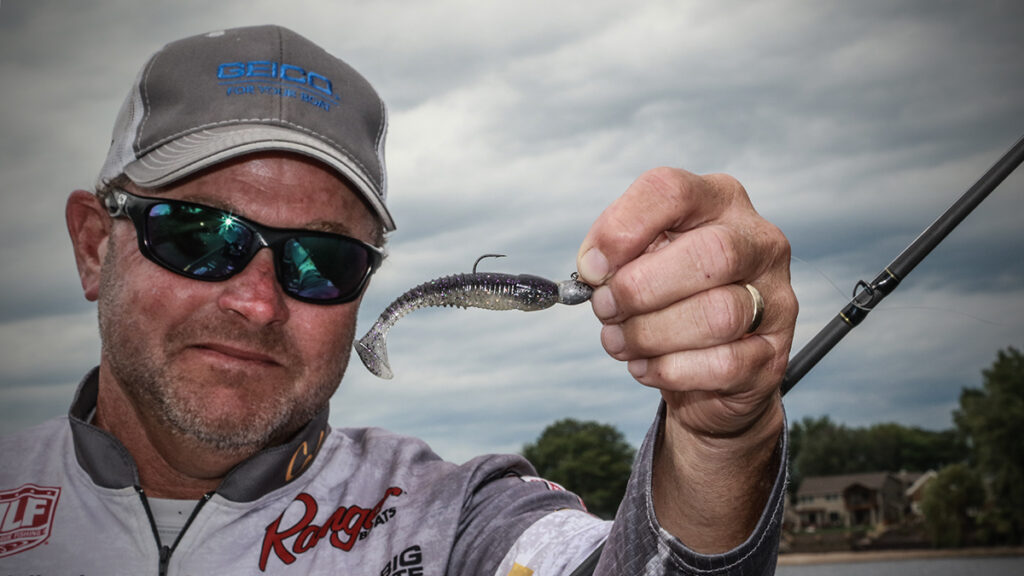 Lending a hand in designing this swimbait, McClelland wanted a bait suitable for the clear water Midwest lakes he grew up fishing. The Big Bite Baits Finesse Swimmer on a Big Bite Swimmer Head, he said, fits any scenario where fish are chasing fall bait.

Presentation: “The bait is made in 3.4-inch and a 4.4-inch sizes so you can upsize when you get around that bigger shad, but you have the opportunity to throw a smaller, finesse bait,” McClelland said. “The typical scenario for this bait is when fish are suspended over treetops and I’m relying on my Garmin LiveScope to look at those fish under the bait.”

Using a 7-foot, 2-inch medium Falcon rod with a 6.3:1 Bass Pro Shops reel and 10- to 12-pound Sunline Shooter fluorocarbon, McClelland counts the bait down and retrieves it through the bait, over the bait, through the fish — whatever the daily preference dictates.

“You can target individual fish hanging high in the water column when you see them on Garmin LiveScope,” he said. “When you have a fish sitting 3 to 4 feet under the surface, they’re out there on the hunt and when they see one bait like that, it looks like an easy meal for them.”

As McClelland notes, forward-facing sonar such as Garmin LiveScope has made anglers more adept at triggering reluctant fish. Watching pursuits and attacks in real time allows anglers to instantly adjust speed, try a different angle or put a little sumpin-sumpin on it.

“If I make a cast or two and the fish just doesn’t move, I’ll throw over his head and wind the bait super fast directly under the surface,” McClelland said. “Bass would rather feed up, so I generally keep that bait above them and just make quick little snaps with my rod tip as I’m approaching the fish or just when the bait goes by the fish.”

Tip: McClelland finds the hardest bites are the ones, in which the fish comes from a long distance. Throwing into a school, he may experience a lot of fish just nipping at his bait, while one that builds up a head of steam will clobber it.

“It’s unbelievable how far a fish will come to eat a swimbait; they’ll come from 30 to 40 feet deep up to 15,” McClelland said. “So it’s not always the best bait to throw over top of them. Sometimes, it’s better to throw off to the side.”