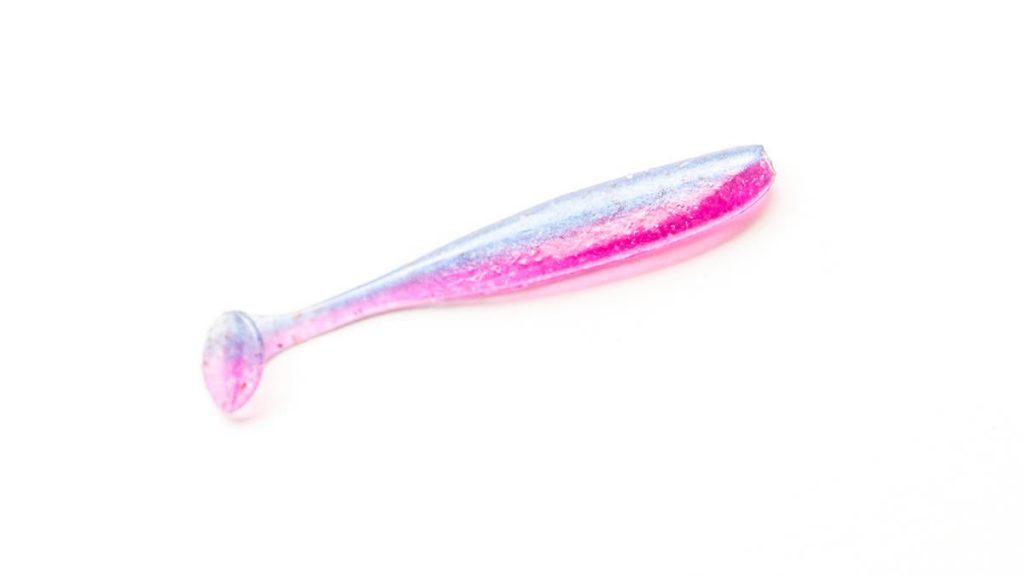 Mike Czaplinski of Branchville, New Jersey, who is the proprietor of KeitechUSA, introduced us to the Easy Shiner. It is one of the creations of the late and great Kei Hayashi of Yamanashi, Japan.

For years on end, Midwest finesse anglers have exhibited a hankering for 2- to 3 1/2-inch soft-plastic baits. Therefore, Czaplinski sent us a 2-inch Easy Shiner to examine and publish a gear guide about it. In the eyes of most power anglers, the 2-inch Easy Shiner is a crappie bait, and for decades these anglers have light-heartily castigated Midwest finesse anglers for crappie fishing for largemouth bass, smallmouth bass and spotted bass. Despite those chastisements from our power-fishing brethren, we have inveigled untold numbers of black bass on our tiny Midwest finesse rigs.

Here is what we discovered about the 2-inch Easy Shiner.

It is a quintessential-looking swimbait, and according to our measurements, it is 2 3/16 inches long when its tail is fully extended.

The shape of its body abstractly mimics the characteristics of a variety of small fish, such as that of a chub, dace and shiner.

The dorsal area is 3/16-inch wide at its widest spot. Its sides are 5/16-inch high at their highest spot. The circumference at these spots is about 15/16-inch.

The ventral area is also slightly convex and it has a hook slot that is 1 3/8 inches long. This hook slot is slightly deeper and wider than the dorsal’s hook slot.

It is enhanced with a strong squid scent.

They are manufactured with what KeitechUSA says is a “specific plastics densities for better balance and action,” which creates a “natural swimming action.”

It is not buoyant.

Czaplinski told us that the traditional black-bass fishermen have discovered “the swimming attributes of the smaller sizes” of the Easy Shiner. Thus, KeitechUSA is selling a surprising number of them.