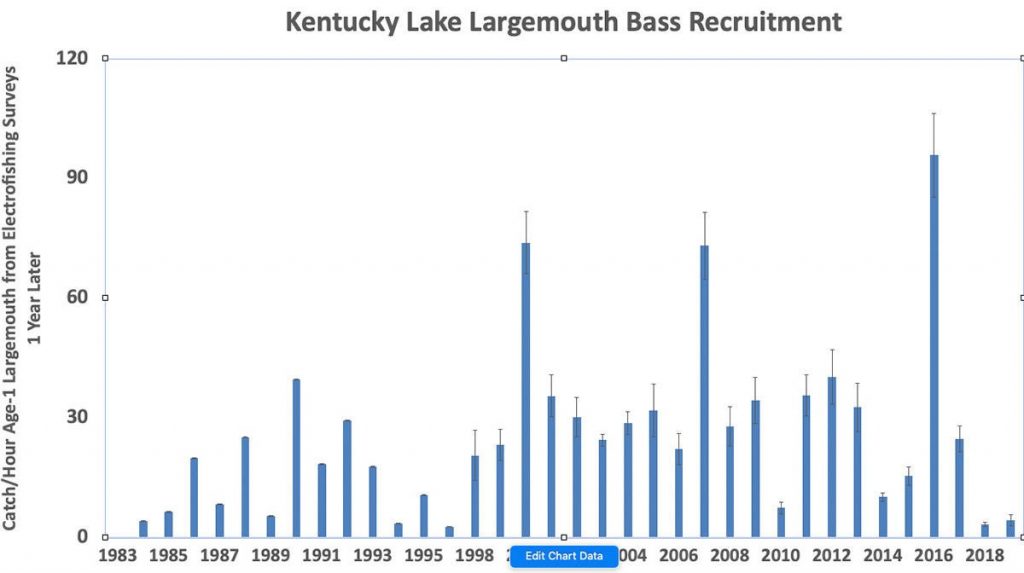 By looking at a bass population on a fishery like Kentucky Lake and the data that has been collected over the years on the fishery and the fish, by fish and wildlife agencies in Kentucky and Tennessee as well as a much broader scope of studies from around the country, we see how different factors can affect largemouth bass populations.

“The view of a lot of people is that the bass fishing was good on Kentucky Lake starting in 1948 and stayed good until the carp showed up and killed them all,” said Adam Martin, Western Fisheries Biologist for Kentucky Department of Fish and Wildlife Resources, with a smile.

Of course that’s not remotely what happened, and we’ve seen equally as bad, or even worse declines in previous decades than we’ve seen during the recent downturn in fishing on Kentucky Lake. In fact, the fishing on Kentucky Lake for largemouth bass was pretty poor for decades. It was more of a crappie fishery until the 1980s when grass and clearer water became more prevalent in the river system. There were more drought periods in the 80s and grass flourished.

In other words the environmental conditions changed and bass fishing got better. But still not as good as it would get later in the 2000s.

A number of factors can contribute to the rise and fall of largemouth bass populations on any given fishery. And while many people think just one thing hurts a population, it’s more likely that many things have to happen simultaneously to have a true decline. We’ll address many of those as they relate to Kentucky Lake because Martin, the KDFWR and the TWRA have shared so much data about the many factors affecting this fishery over many decades.

TWRA and KDFWR have been keeping detailed creel survey results and catch per hour rates over time. This is the easiest way to measure the health and trends of populations on a fishery.

In the late 90s, there was a decline in the bass population on Kentucky Lake. Anglers and biologists were concerned about the population and the fishing and set the minimum length limit of 15 inches in 1997 in the hopes that it would slightly decrease harvest and improve the fishery. While largemouth bass virus was a concern at that time, the true culprit as studied through electrofishing surveys was three bad spawn classes in a row. And what we saw for tournament results around that time were actually as bad or worse than what we’ve seen recently with tournament results.

Then in the 2000s, the fishery saw an explosion of good bass fishing. More habitat was in the lake with grass. But the catch rates could also simply be attributed to advent of side imaging and anglers getting a lot better at finding large concentrations of bass all of the sudden. And that’s partially why the recent downturn appears so dire on the lake when in fact it’s probably not as bad as ones we’ve seen in years past according to the data. It’s more a function of it was so much better and then took a steep downturn.

And this is not a situation where anglers are confused or how to catch fish consistently has radically changed. It is in fact tougher to catch a bass than it was 5 years ago because the bass population numbers have actually declined. So we have to look at the factors that could have caused what is happening with the population now.