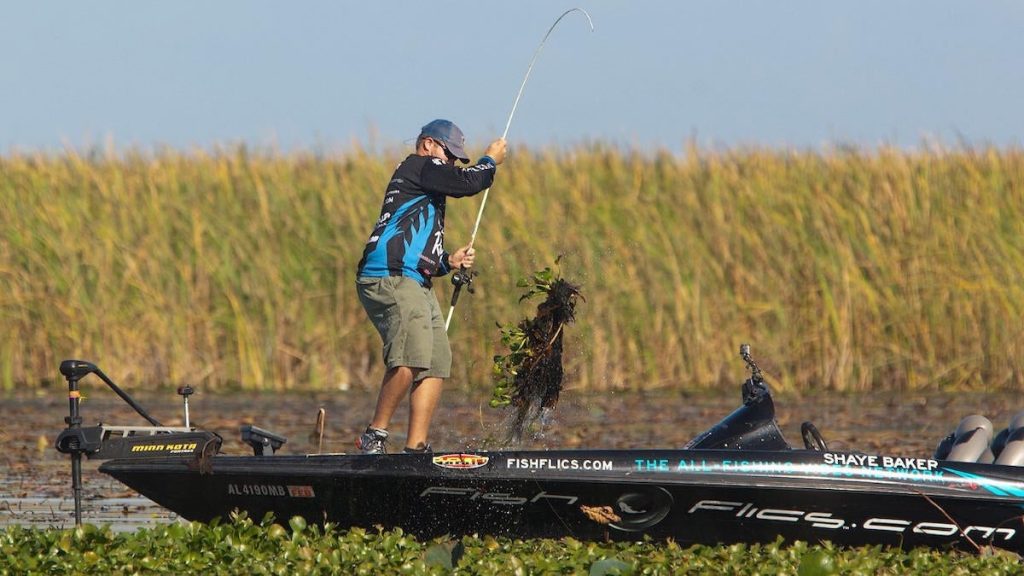 Recently I was fishing a Wednesday night pot tournament with my dad. It was getting late and pretty close to dark. Suddenly a bass (and a pretty big one at that) exploded on my frog. The fish hit in about a foot of water and went absolutely berserk. In a matter of three seconds or so, I had involuntarily run from the front of the boat to the back deck and was faced with an ultimatum as the fish tail-walked its way down the side of the boat.

I instinctively boat flipped the fish… or tried to, at least. As I eluded to, it was close to dark and in the madness of the situation with all the sloshing, I mistook the fish for a pound or two heavier than it was and made the mistake of thinking I had more line out than I did. So as I swung the 4-pounder into the boat, I did so with the enthusiasm it would have taken to swing a 6-pounder… and I did all this with about two feet of line out.

One of the biggest rookie mistakes I’ve made in a long time.

The combination lead to about 16 inches breaking of the tip of my rod, my 40-pound braid being cut clean by the broken rod and the fish bouncing twice across the deck of the boat and out the other side. All while dad and I watched helplessly and took a minute or two to fully grasp what had just happened.

I’ve heard this referred to as high sticking. Essentially, it all comes down to putting too much pressure on the last foot to two feet of your rod tip in a vertical position. I thought the fish was bigger than it was, so not wanting to bang it off the side of the boat, I ended up lifting it too high in the air. Add to that the short length of line I still had out and when my rod tip got high… snap. A very unfortunate and avoidable set of circumstances and a lesson learned the hard way.