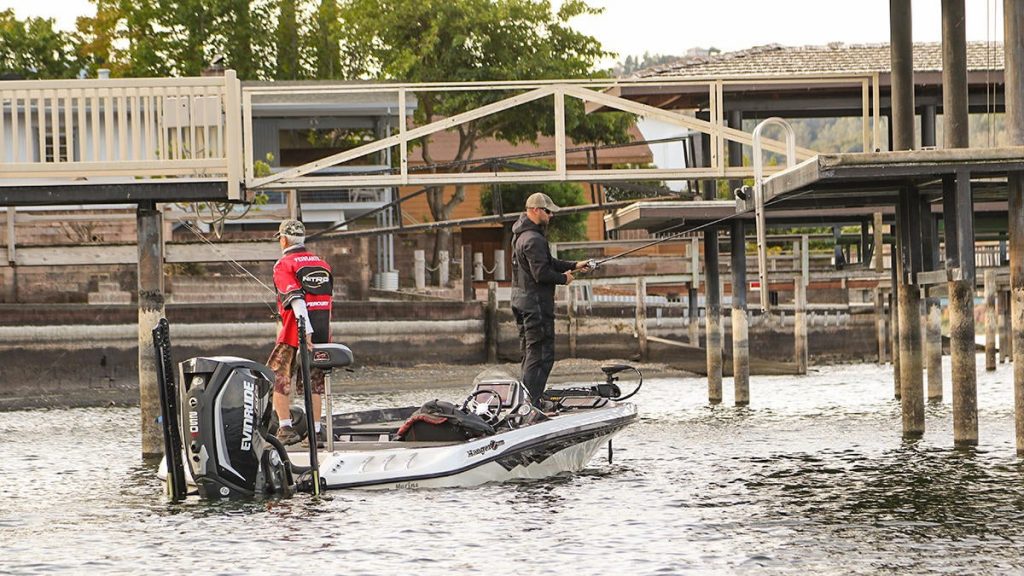 California pro Bryant Smith does plenty of work on low docks, but he won’t hesitate to perform exploratory surgery on a structure high enough for him to poke in, under and through its body. Vision is one benefit – the ability to spot fish in shaded waters with more ambient light exposure; but Smith knows there’s a deeper strategy.

“I think where this excels the most is that it gets you a few more bites than the guys who tend to fish the docks from the outside in,” he said. “If you change the angle on them, I think you can trigger a few more fish. I think you can present your bait in way that the fish may not have seen it that day.”

Talking tactics, Smith said the amount of time it takes to needle through the often tight confines below high docks necessitates efficiency. Initially, he’ll grind it out and check all likely positions, but the sooner he dials in a pattern, the more efficient his day becomes.

“I like to have an idea of what pilings they’re going to be on,” Smith said. “Maybe it’s the ones on the gangway, maybe it’s the deeper ones, maybe it’s a piling at a certain depth range. If I can narrow that down, I can fish a lot more docks in one day.”

Best baits: While reaction baits and skipping options work well from the outside angles, Smith knows that poking underneath a high dock usually means short, tight presentations. He’ll definitely keep a jig, a squarebill and a spinnerbait handy for those moments when the right angle affords a longer shot – like emerging from one dock and throwing at the next one’s gangway – but for the interior operation, he’s going Neko.

“A Neko rig falls erratically along pilings and triggers bites that you may not get with a spinnerbait or a worm,” Smith said. “The weight is one of the more import things. The lighter you go the wider the spiral on the way down.

“If they’re aggressive, you can use a heavier weight; if not, you have to go lighter. That keeps your bait in the strike sone longer.”

Considerations: Obviously, navigating below high docks, poking around in their inner sanctums and actually crossing under and continuing on to the next structure creates lots of “oops” potential. Suffice it to say that bumping into a piling will pretty much kill the deal, but Smith points out other considerations.

“On the higher ones, you have more angles, so be smart about how you approach,” he said. “Let the wind blow you through the dock, instead of fighting the waves and being on the trolling motor.

“You’re going to cast a shadow underneath that high dock, whereas you wouldn’t on a lower dock. Pay attention to the stealth aspect of it – making them unaware of your presence as much as possible.”

When sizing up a dock’s potential, consider these points:

More is… more: Not saying a simple walkway dock won’t have significant peripheral structure, but let’s face it, the more time folks spend on a dock, the more likely the surrounding water bristles with planted brush piles, stake beds and deck chairs that someone forgot to secure before a storm. Add some reeds, tules, or pads and you potential increases.

Day to day, you’ll rarely go wrong with docks of any form, but success depends on choosing the right one. Experience borne of trial and error guides a lot of this, but it’s important to get the lowdown on the high points.