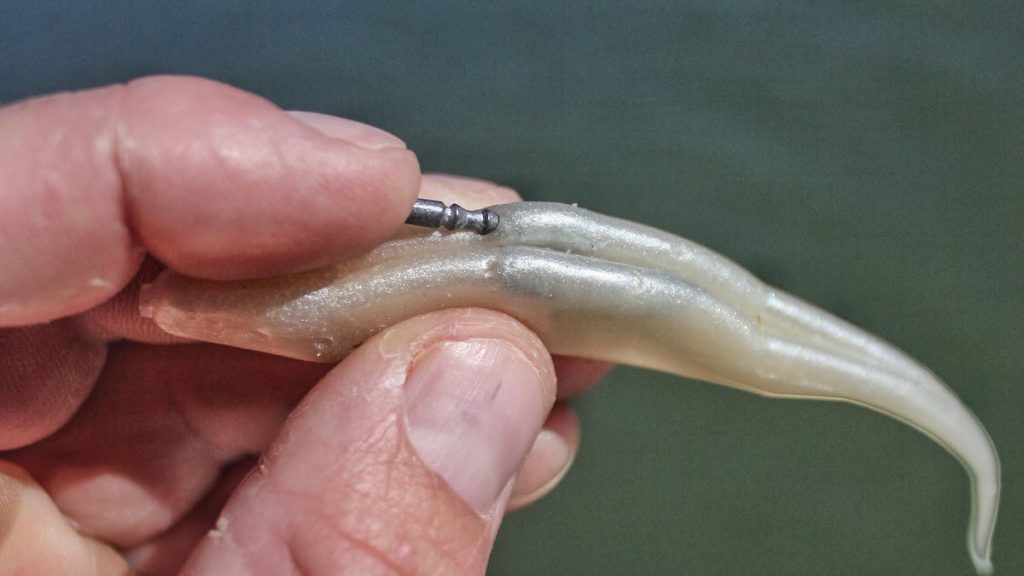 The Fluke was a little tricky. And yes, I’m talking about the Zoom Super Fluke when I say Fluke, not the original Fluke which is a good bit smaller. But before we talk about how to weight a Fluke and what happens when you do, it’s a fair question to ask why you would even want to.

My initial thoughts were that weighting the nose of a Fluke could be helpful in that it might make the Fluke swing further from side to side. So you could fish it along docks and the bait would swing further underneath them. Another cool application would be for bed fishing. A Fluke is already a great bait around the spawn but now you could work it up to the bed and then let it fall into the bed where it would look like a baitfish pecking around.

What I found when weighting the bait in the nose is that it doesn’t really swing out any farther. It does look killer on the bottom and I think it would make a great bed-fishing presentation. But what all that led to was me putting the weights into the midsection instead. I tried putting a 1/8-ounce VMC Neko Weight in the back and that did two things. It let me throw the bait a lot farther, but it also rolled the bait over so that it swam upside down on the retrieve. The action wasn’t really affected however, even though the bait was inverted.

But this kind of bothered me a bit so I tried taking two smaller 1/16-ounce weights and putting them in the bottom of each side of the Fluke’s belly. This kept the bait upright and moved the weight from the back so there would be less chance of it interfering with the hookup also. Where I think this will really shine is when fishing for schoolers. A Fluke is a great bait for schooling fish, but the fish are often out of reach. This added about 20 feet of range when chucking it around the yard.