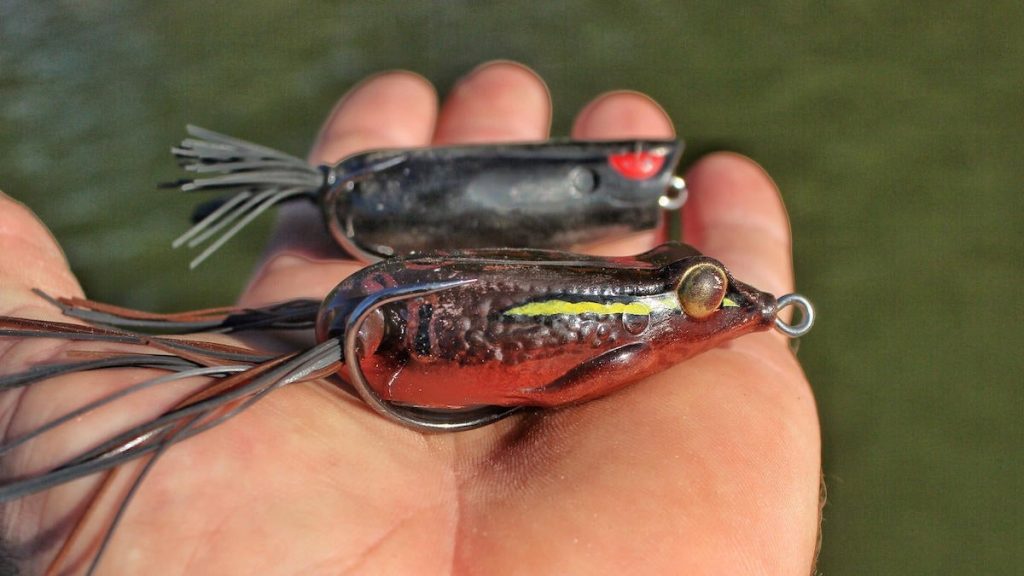 I always start off the year with a walking frog or a pointed-nose frog as some people call it; it’s a good bit more subtle than a popping frog. While the water temps are still a little chilly, I like to stick with the more docile walking frog. This is one of those times where I think the number of bites you can get on a frog greatly increase by choosing one over the other.

That being said, that increase numbers-wise may not be all that great. Early in the spring when the water temperatures are still in the 50s, if I choose to mix a hollow body frog into what I’m doing, I may only get two bites on it. But I can almost guarantee if I can get two bites on a walking frog, I could have expected one or even zero on a popping frog. Worse yet, a good fish or two may have only rolled on a popping frog.

The walking frog is just better in those colder water temperatures. It has a more subtle action and though I can work a popping frog virtually in place too, you have the ability with a walking frog to twitch it side to side with minimal surface disturbance and keep it right in a fish’s face for a long time. That makes this bait extremely effective when the fish are still a little lethargic in those colder waters. But even as the waters start to warm and the fish begin to spawn, I’ll still stick with a walking frog over a popping one all the way up until they start to come off the bed.

A walking frog just does better while the fish are in this more hesitant phase. For instance, compare a floating worm to a buzzbait. It’s a more drastic contrast but a good example nonetheless. While the fish are up cruising and trying to spawn, a buzzbait may catch a few but the more subtle floating worm will normally catch several more. The same holds true for the walking frog versus a popping frog for me, so that’s what I go with.