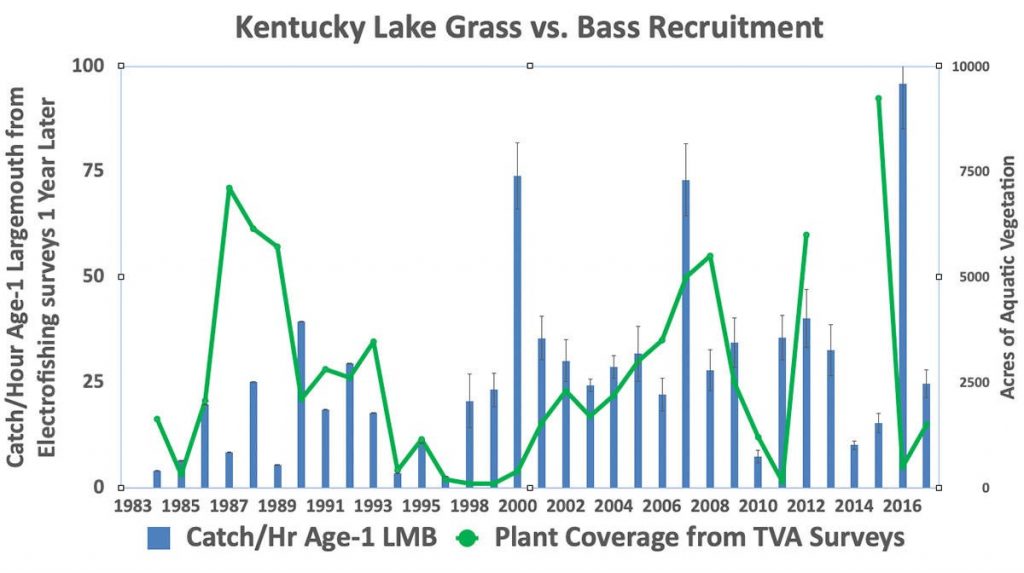 Many anglers equated the grass disappearing in 2015 with the subsequent decline in bass fishing that followed after. So it makes a clear association for people, but it’s also not the cause. Grass has an effect on fishing quality for sure. But not as much as we may think on spawn recruitment, or the success of spawning year classes.

“TVA biologists monitor the levels of vegetation in their reservoirs,” Martin said. “They does flyovers every year, and we have a lot of data on surface acres of grass on Kentucky Lake going back decades. You would think that grass would improve the survival of juvenile fish enough to impact the spawn in a positive way. That thinking would then say we could use the amount of the grass coverage in a lake to predict the success of the spawns.

“It makes fishing more fun, but those main lake grass beds don’t seem to improve the spawn on Kentucky Lake. Also, when it’s a good spawn on Kentucky, it’s almost always also a good spawn on Barkley. And, Barkley has almost never had grass. In some lakes, the amount of aquatic vegetation can be hugely important, but at Kentucky and Barkley, it’s harder to make that case.”