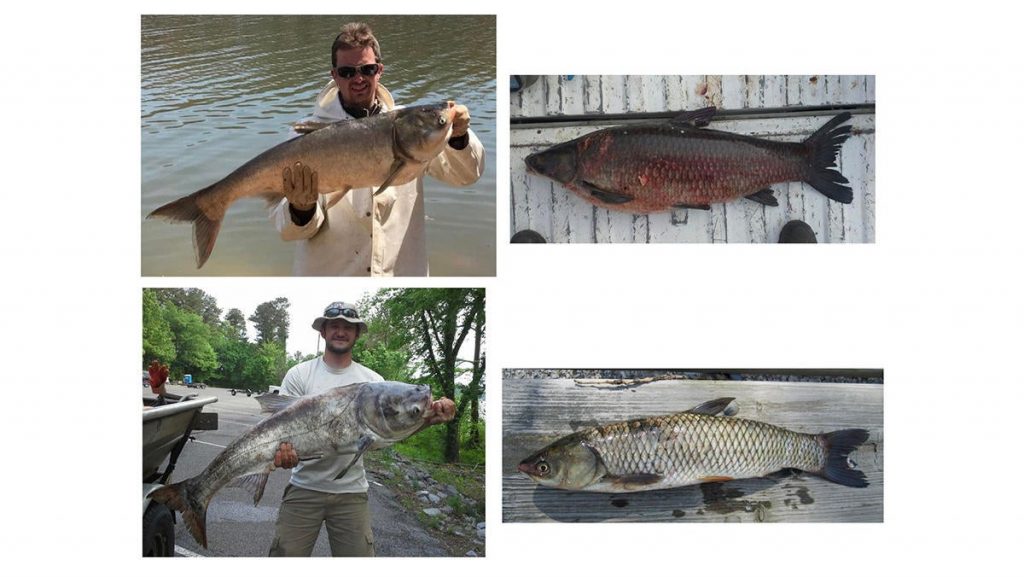 The influx of Asian carp has certainly affected the fishery, and every effort needs to be made to remove them from the system. Millions of federal dollars have been allocated to their removal, and this will definitely help the fishery as a whole rebound better.

But the carp influx is complex in its effects.

“Many state agencies including mine will have some form of the sentence: ‘Asian carp can outcompete our native species because they feed on plankton and all larval fish feed on plankton’ on their website. Which is true in a very broad sense, but the actual effects of Asian carp will be different for each species and for each life stage of fish with some life stages even experiencing positive benefits.”

There is potential diet overlap not only between carp and bass fry, but also with carp and other forage species. That is the real issue that should concern anglers.

“You need two things for diet competition,” Martin said. “First you need diet overlap, or feeding on the same resource in the same place at the same time. Secondly you need a limiting food resource, or basically, there is not enough food to go around.”

Native shad species like threadfin and gizzard feed on phytoplankton and zooplankton as well, so again, there is potential for overlap. Which potentially can cause slower growth for bass who rely on shad as one of their primary food sources.

Murray State University and Hancock Biological Field Station have been studying plankton levels in Kentucky Lake since 1988. Their reservoir research team have more information about carp effects on the fishery than most. Dr. Michael Flinn (MSU) has shown that chlorophyll levels (a proxy for plankton levels) potentially declined after 2010 and 2015 when the carp spawns hit the lake, but that it has not had a long lasting effect on plankton levels.

While carp could certainly disrupt fish that are spawning and hatching and needing zooplankton in the spring as the silver carp are filter feeding 24/7, to see if that is affecting juvenile bass abundance, you have to look at them at different stages of the year.

“We have been collecting juvenile bass since 1985 through electrofishing,” Martin said. “We collect them first in October, their first fall as age 0 fish. Then again the following April or May, we collect them as Age 1. So what we might expect that if the carp were having a negative impact, the average size of our young bass would have been good until a large carp spawn and then it would have dropped off. However that is not what we saw. Pre-carp and post-carp we still see lots of ups and downs and wild swings in the average lengths of age 0 bass each October.

“The results of our bass growth studies have been a bit unexpected, because I expected to find that a lack of food during that critical first summer was the reason for our poor bass spawns. Some prior work at Kentucky Lake showed that the overwinter survival is pretty low for bass that are less than 5 inches in that first fall. So if silver carp were reducing the average size of our age-0 bass through diet competition it would perfectly explain why we have seen some poor year classes in recent years.

“To test that theory we basically looked at the size of young bass each year and compared it with the abundance of young bass. The theory being that in years with a good spawn and a lot of young bass in the fall, an overall lack of food should cause them to be shorter than in years with a low abundance of bass. The relationship we would expect if carp are affecting bass growth rates, then the age 0 bass in the fall should be shorter. So if food is limiting, they should be smaller if there is more of them and longer if there is less of them. We see the opposite when we look at the time period of the carp invasion from 2004-2018.”

“So our years with the largest catch rates also have the longest average lengths in the fall. That was surprising to us as biologists. Three of the four top year classes as far as abundance were also the best years for average lengths. So not only did we not see the negative relationship between abundance and growth, we are seeing the opposite. It can’t be that because there are more fish they are longer. So it’s likely caused by another factor. At least for the moment, we don’t have much evidence that Asian carp are limiting the food resources for our young bass, at least not yet.

“We have also not seen a decline in the growth rates of our adult bass, and outside of one year – in 2017 – the fish are in really good condition showing healthy length to weight ratios.

“So it isn’t really obvious to me that carp have hurt the population of bass. Kentucky Lake was booming after the 2010 carp spawn. It was already cycling down in the 2015 spawn from other factors like spring climate patterns and the effects wet vs. dry springs; it just wasn’t showing up yet in the fishing.

“This is great news for Kentucky Lake bass anglers, but it’s important to keep in mind that Asian carp are still a huge problem and other fisheries are likely to experience harsher impacts if they continue their population expansion.”