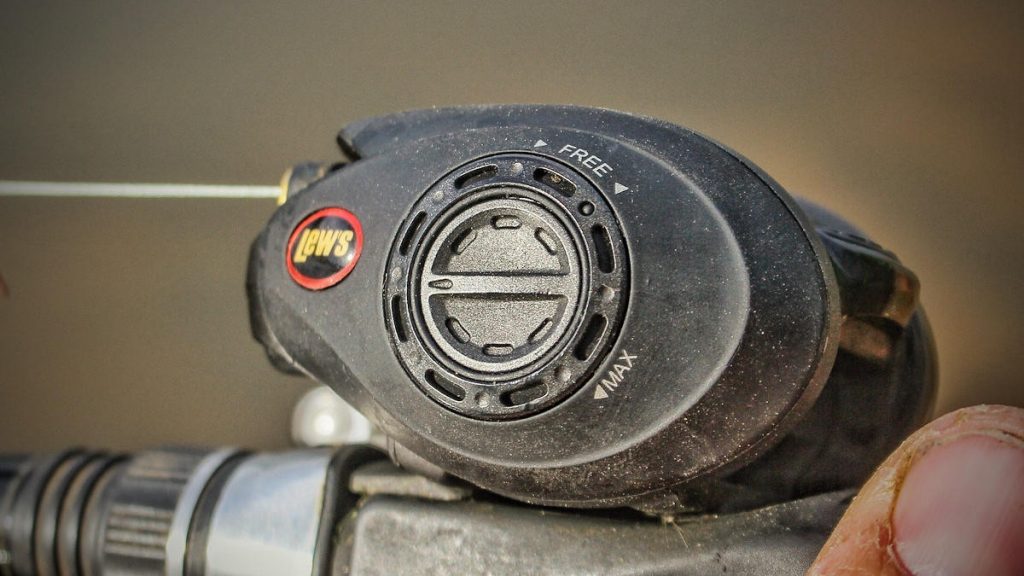 There’s a lot to unpack in this section. Most reels have either a magnetic braking system like the Lew’s Super Duty pictured here or a centrifugal braking system like the older Shimano Curados which a lot of you will be familiar with. There are also some that have a hybrid of the two like the Abu Garcia Revo 4 Infini Brake System and then some that have a Digital Control like the Shimano Metanium DC reel. Again, too much to go over here, so let’s not get bogged down and instead just look at the two most common ones: centrifugal brakes and magnetic brakes.

Inevitably, the braking system on my reels will end up at about halfway. But it’s wise to start off with it maxed out, the same as the spool tension knob, and then back off until you can throw a pretty good distance without your spool overrunning at the end of your cast. This will help prevent a backlash. You’ll also learn in time to gently ride the spool with your thumb during the cast, applying pressure to stop the spool at the end of each cast. But for starters, maxing out the braking system does this for you. It will just greatly reduce the distance you can cast. But start there for sure and then loosen it up gradually as you practice.

To touch on the centrifugal braking system, the purpose is the same as the magnetic braking system; to slow and stop your spool at the end of the cast. The main difference is the actual controls. Usually, you have to remove the side plate opposite the reel handle and push pins in or out. Pushing them out applies more brake. Pushing them in applies less.

There will always be an even number of pins and it’s best to set them two at a time. So if you need more brake, push the two in that are across from each other to help the reel stay balanced. If you need less brake, push two inwards that are across from one another. This helps the reel stay balanced and operate more efficiently.