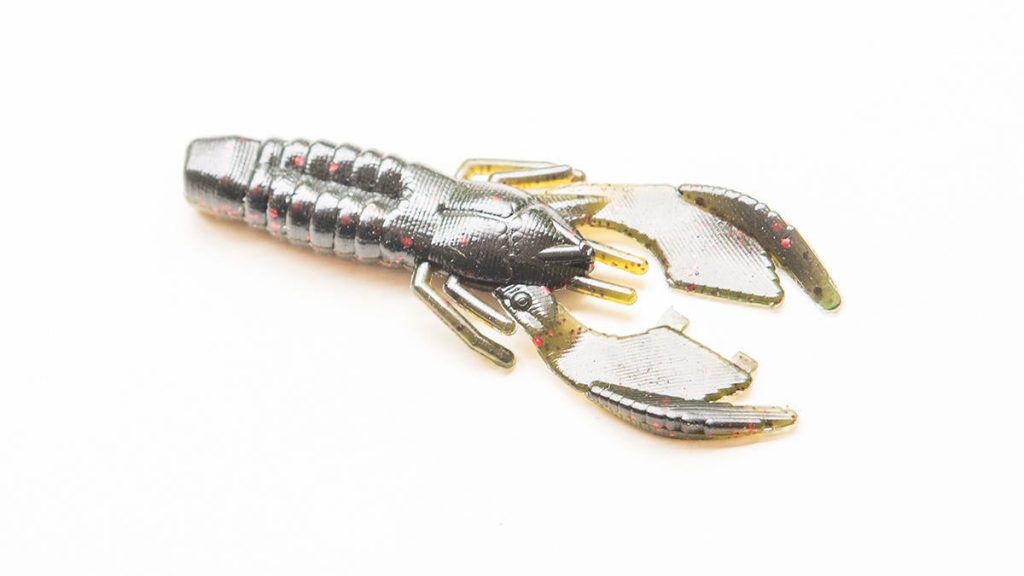 Since Chuck Woods of Kansas City, Missouri, created the Puddle Jumper in the early 1970s, and Dion and Guido Hibdon created the Guido Bug in the late 1970s, Midwest finesse anglers have been infatuated with and wedded to a variety of small crayfish-style and creature-style baits. And Bizz Baits’ Baby Bizz Bug became part of this world in 2018.

When we contacted Brian Souza of Huntersville, North Carolina, who is the proprietor of Bizz Baits, we apologetically told him that we were way overdue in publishing a gear guide about his Baby Bizz Bug. Despite our lack of assiduity, he forgave us by graciously sending us some to thoroughly examine.

According to one of Bizz Baits’ advertisements, it was designed with Midwest finesse anglers in mind, noting that it can be affixed to a mushroom-style jig. It was also noted that it can be used on a Texas rig and as a trailer on a skirted finesse-sized jig. Souza describes it as a blend of a crayfish-style and a beaver-style bait.

According to our measurements, it is 3 1/8 inches long.

It is an abstract rendition of a crayfish.

Its abdomen, which is situated on the posterior portion of a crayfish, is about 7/8-inch long. Its dorsal area is segmented with six tergums or segments, and these six tergums are indented with a hook slot that is about 3/4-inch long and about 1/8-inch wide at its widest spot. At its third tergum, it is 9/16-inch wide with a height of 5/16-inch and a circumference of about 1 5/8 inches. Its ventral area has seven segments, and they are indented with a hook slot.

The end of the Baby Bizz Bug’s posterior is not endowed with the uropods and telson of a crayfish. Instead, it is a solid piece of soft plastic with somewhat of a trapeze shape. It is about 3/8-inch long with a width of about 7/16-inch wide at its widest spot, a height of 5/16-inch and a circumference of about 1 1/4 inches. Its epidermis is smooth and its dorsal and ventral areas are identical.

The abdomen is attached to the Baby Bizz Bug’s cephalothorax. It is about three-quarters of an inch long. At its widest spot, it is about nine-sixteenths of an inch wide with a height of a 1/4 inch high and a circumference of about 1 1/2 inches. The dorsal area is endowed with a cephalic groove, rostrum, and carapace. Its ventral is smooth. Two walking legs radiate from each side of the cephalothorax. Each leg is jointed or bent. The first or front leg is 1/2-inch long and the second one is 11/16-inch long.

The Baby Bizz Bug has a cheliped or claw extending from each side of the cephalothorax. When the cheliped is fully extended, it is about 1 5/8 inches long. Along the outside edge of the claw, there is a significant ridge that is about one inch long, and at its highest spot, the ridge is 1/8-inch high. The rest of the claw is flat, and at the end of each claw, it is about 1/2-inch wide. It is also thin with a thickness of about 1/16-inch.

Two short antennules radiate off of the tip of the rostrum. They are cylinder-shaped with a diameter of slightly more than 1/16-inch. They are about 5/16-inch long.

When the Baby Bizz Bug is manufactured, the two claws are attached together. This makes it a bait with a beavertail. But the two attachments can be easily clipped, which allows the Baby Bizz Bug to have a pair of crayfish’s claws.

It is made with Bizz Baits’ signature buoyant plastic. But the Baby Bizz Bug does not float. Its claws, however, are relatively buoyant, which accentuates the claws’ ability to seductively undulate and gyrate.

They are salt impregnated and scented with Bizz Baits’ signature Jack’em Juice.

You can find the Bizz Baits Baby Bizz Bug here.