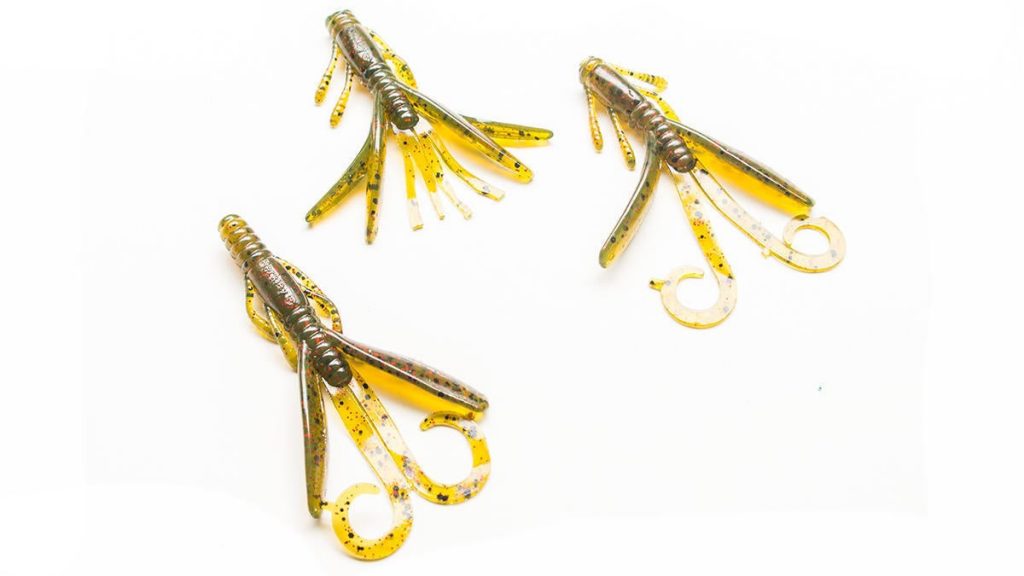 Berkley reintroduced its PowerBait Power Hawg to the angling world at the 2018 International Convention of Allied Sportfishing Trades show in Orlando, Florida.

This creature bait has been a standard tool for a number of the anglers in the power-fishing fraternity for many years. For instance, Skeet Reese of Auburn, Calif., has lauded and wielded it often. In fact, it played a significant role in his win at the Bassmaster Elite tournament at the Potomac River in August of 2007.

Even though it is a power bait, it has recently caught the eye of some Midwest finesse anglers who are inveterate customizers of power baits. And one of them suggested that we should publish a gear guide about the smallest version of the Power Hawg.

We asked Hunter Cole of Columbia, South Carolina, who is Berkley’s media and public relations manager, to help us in our endeavor. He responded by sending us some samples to examine and describe.

Its torso is 2 5/16 inches long and divided into three sections: anterior, clitellum, and posterior, which are features of the anatomy of an earthworm.

Its posterior section is 3/4-inch long. It is encircled with five segments and tipped with an anus. At its widest spot, it is 3/8-inch wide with a circumference of about 1 1/4 inches.

Its anus is slightly indented, which is where the hook and collar of a Midwest finesse angler’s mushroom-style jig will be affixed. The tissue surrounding this indention is a 1/4-inch wide with a circumference of about 1 1/16 inches.

Its clitellum is 3/4-inch long. It is 5/16-inch wide with a circumference of about 1 7/16 inches. Except for the word Berkley, which is 5/8-inch long and an eighth of an inch wide, the clitellum’s epidermis is smooth.

The anterior section is 7/8-inch long. It is encircled with seven segments. It is 1/4-inch wide with a circumference of about 1 1/16 inches.

The anterior is adorned with two large and flat appendages. They radiate from each side of segments number four and five. These appendages are 1 1/16 inches long, 7/16-inch wide, and 1/8-inch thick. Their epidermis is smooth.

It is permeated with Berkley’s exclusive Powerbait formula, which, according to the folks at Berkley, is a scent that will provoke a black bass to “hold on longer – up to 18-times longer than with standard soft plastic baits.”

It is buoyant, which is an attribute that most Midwest finesse anglers relish.