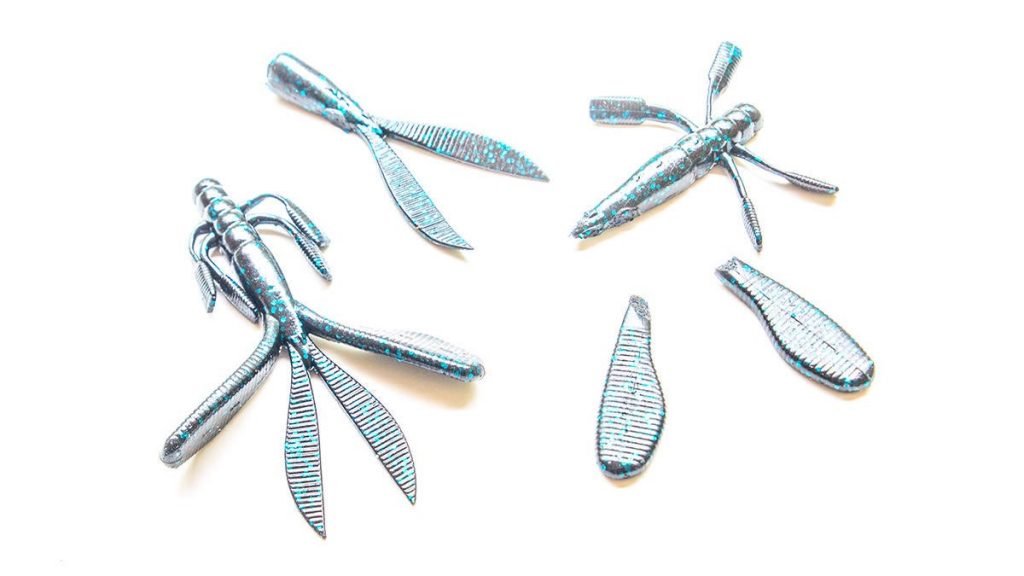 Berkley’s 4-inch PowerBait Mantis Bug is a multifaceted creature bait that was created for power anglers.

It was introduced to the angling world at the 2018 International Convention of Allied Sportfishing Trades (ICAST) show. Since then, it has caught the fancy of some Midwest finesse anglers who are inveterate customizers, and one of them convinced us to feature it in a Midwest Finesse gear guide.

The combination of its head and torso is 2 5/16 inches long.

Two appendages radiate from each side of segments three and four of the posterior section. Each appendage is 1 1/8 inches long. The end of each of the appendages sports a rectangular-shaped feature that is a quarter of an inch wide and a half of an inch long. They are flat and embellished with a series of tiny ribs.

The anterior portion of the torso, which included its head, is 1 3/8 inches long. It is seven-eighths of an inch wide with a circumference of 1 3/8 inches near its junction with the posterior section. The dimension of the anterior section becomes increasingly smaller as it approaches the tip of the head. It exhibits an elliptical shape, and the tip of the head is somewhat similar to a sharpened wooden pencil. The ventral area is flat, and its dorsal is convex. The dorsal area of the head is embossed with two tiny eyes. The anterior’s epidermis is smooth.

About 3/4 inch from the junction of the anterior and posterior sections, a large, flat, and heavy appendage extends from each side of the anterior section of the torso. Each appendage is two inches long, 5/8-inch wide at the widest spot and 3/8-inch thick. About a half of an inch of its epidermis is smooth, and the rest of it, which encompasses 1 1/2 inches, is adorned with a series of minute ribs, which are similar to the tiny ribs that adorn the rectangular portions of the posterior’s four appendages. These two appendages are paddle shaped.

Another flat appendage branches out from each side of its head, which is adjacent to each eye. It is two inches long, 3/8-inch wide at its widest spot, and 1/16-inch thick. The entire dorsal side of each appendage is endowed with a series of minute ribs. The epidermis of the ventral area is smooth, but one of the appendages has the name Berkley embossed upon it. These two appendages possess somewhat of a knife shape.

It is infused with Berkley’s exclusive Powerbait formula, which, according to the folks at Berkley, is a scent that will provoke a black bass to hold on longer to it “up to 18 times longer than with standard soft-plastic baits.”

It is not buoyant.

After Midwest finesse anglers perform their various customization routines with the Mantis Bug, they will affix it to a small mushroom-style jig with an exposed hook. They will present it to their black bass quarries by employing the six standard Midwest finesse presentations or slight variations of them.

You can find the Berkley Mantis Bug at these retailers: