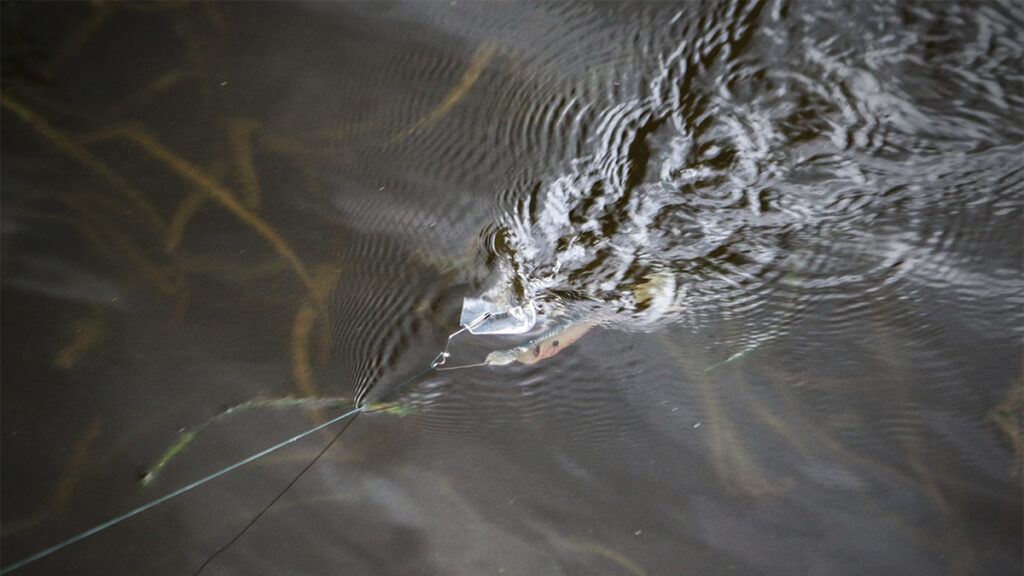 While the soft-plastic body certainly merits attention, McClelland said it’s the delivery system that makes the magic happen. Sporting a hand-painted head that matches the body’s color pattern, the Big Bite Baits Suicide Buzz features a squeaky blade that can be tuned for a clacking sound. Either way, the commotion allows him to mimic the frantic forage look that triggers bass.

“The shad migration is such a big deal and these fish start feeding on whatever baitfish shows up on the bank,” McClelland said. “In some of our lakes in the fall, typically there will be a migration of what we call ‘shore minnows’ — smaller bait that goes to the bank first.

“A lot of times, those fish really key on that smaller bait and that’s a big reason I like that Suicide Buzz. A topwater is always a good bait to throw in the fall and when you combine it with that (realistic looking) swimbait, you have a bait that will not only catch a lot of fish, but also your chance to catch big ones is there too.”

Presentation: Noting that fall bass often feed super shallow, McClelland said he won’t hesitate to throw this swimbait in inches of water — sometimes, actually hitting the bank. Often positioning right off that first shore break, the fish will patrol the skinny water and ravage anything they find. Natural banks, as well as riprap fit the plan.

Tip: “Don’t ever think you’re throwing too shallow in the fall,” McClelland said. “Whether it’s 4 inches deep, 6 inches deep or a foot deep, those fish nose up to that break, just waiting for bait to get between them and the bait. That buzzbait lets you fish as shallow as you need to be.”

“I make a lot of long parallel casts, but when you’re skipping behind boat docks and throwing at specific targets, so much of your cast is wasted,” McClelland said. “Being able to reel up fast is important, as well as keeping a bait moving. That time of year the fish get really aggressive when they’re chasing shad and you want a high speed reel so you can keep your bait moving.”