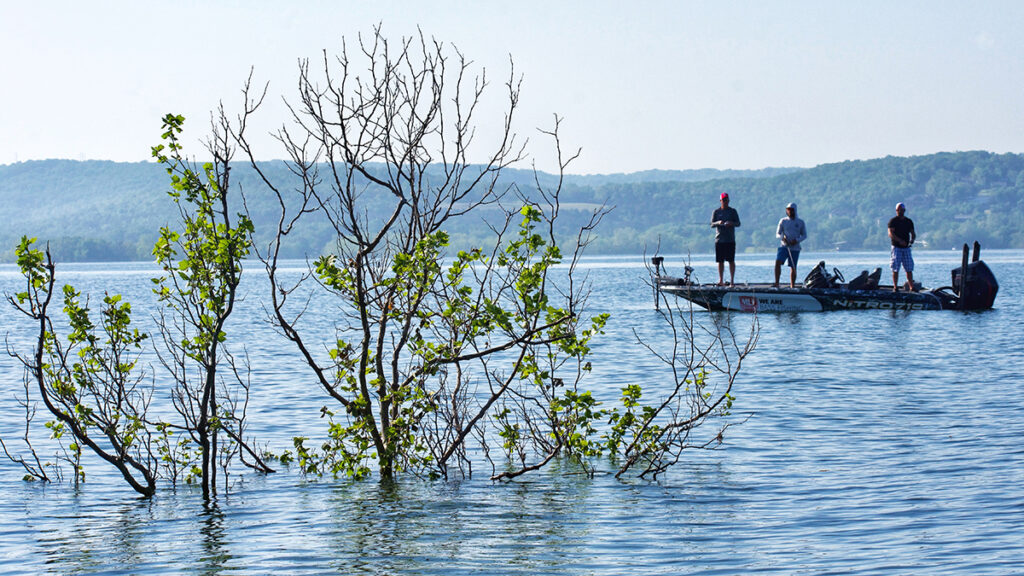 The last tip isn’t so much related to the action of the shad spawn itself, but rather following where bass move to after they’ve taken advantage of their baitfish breakfast. It’s all related to big, obvious pieces of cover in proximity to where you experienced intense shad spawning. Think of this as picking off the scraps of the shad spawn.

While concentrating on a shad spawn I’m always looking for individual pieces of cover where I think bass might pull to following the feeding frenzy. An isolated bush on a point, a big gnarly laydown, a unique patch of grass or a stand-alone dock are all perfect places for a post spawn bass to hang out in early summer afternoons. The more isolated the better.

These are great places to come back to later in the day and flip with a Texas-rigged creature bait like a Zoom Brush Hog, Strike King Game Hawg or a wacky-rigged stick worm when the activity of the morning is nothing but a memory. They are high percentage targets that won’t take you long to fish and are part of pre-established milk run. It’s a last-ditch effort to take advantage of the population of bass found during a shad spawn and get a few extra bites.

Exploiting the shad spawn is one of the best ways to catch bass every year in May and June throughout most of the country. If you’re like me and have struggled to extend the morning magic of this occurrence, put these tactics to the test and have confidence you’ll put more bass in the boat.