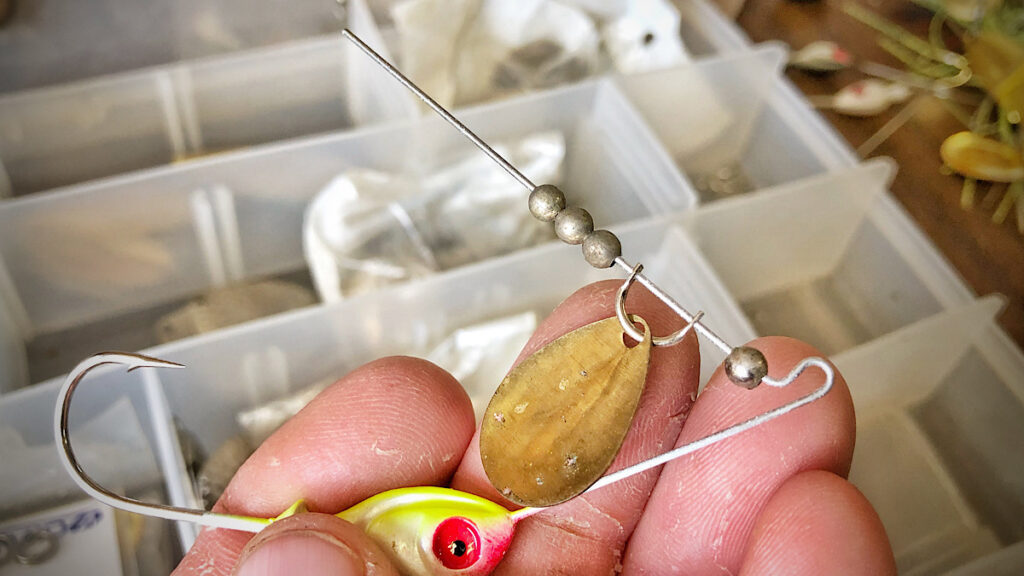 All spinnerbaits have a few basic components. Using the lead head, hook and wire harness as the starting point, you’ll then slide at least one of the little metal beads up the wire or arm of the spinnerbait. This is put here to prevent the little U-shaped clevis that comes next from sliding all the way up the arm of the spinnerbait and then getting jammed on the bend of the wire near the line tie, as that tends to happen without this little bead in place.

Now for our example, we’re going to make a tandem spinnerbait, simply meaning it has two blades on it. This requires a smaller blade to the inside of a larger blade.

Take a U-shaped clevis and run it through the hole in the smaller blade, then slide the clevis onto the arm of the spinnerbait. When you do this, make sure the cup of the blade is facing outward. If it isn’t, take the clevis back off and, with the blade still on it, simply flip the clevis around and run it back up on the arm. This should now have the cup facing away from the line tie. If you get this backwards, the inside of the blade can’t catch water and won’t rotate well. Now, depending on the size of your blades, you’re going to want to create some fixed distance between the blade you just put on the bait and the blade that will inevitably be attached to the end of the arm.

You can do this using several of the little metal beads or there’s the option to add long cylindrical plastic or metal spacers. We usually just put three or four beads on there and we’re good. This will be something you have to play with a bit, but the intention is to create enough space so the two blades can rotate in the water without hitting one another. Once you’ve added the appropriate amount of spacers or beads, now you’re ready to attach the blade.

Note: This is an important step. The two ends of the swivel will look similar, but one end of the swivel actually spins inside of the other. You want to attach the blade to the end that spins and the fixed end with attach to the spinnerbait arm via the split ring on that end.