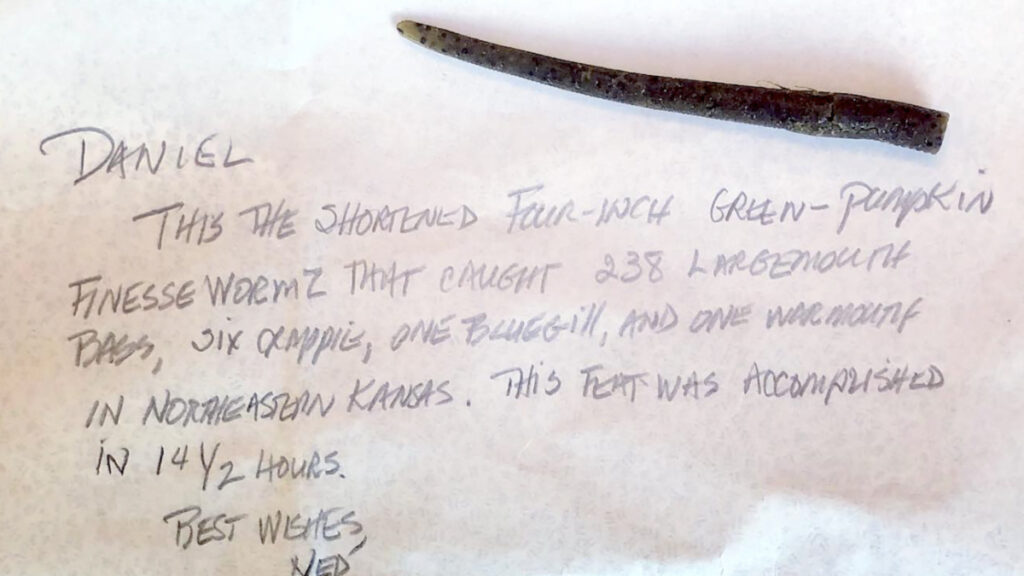 By September 1, Waldman’s magic TicklerZ had allured 135 bass. “The bait was still in good shape; had all its tentacles with no big rips or tears in the material.”

One week later, he had landed 175 fish, yet the TRD TicklerZ was exhibiting only early signs of wear. “The bait looked pretty scuffed up; had all its tentacles intact, though one was partially ripped off. I was still feeling pretty good about my chances, but had over 70 fish to go.”

On September 9, near-disaster struck. “After picking up another 11 fish, panic set in when I hung my bait up on something well out in the pond,” Waldman recounts. “Luckily, a couple bow-and-arrow snaps popped the bait free. But I didn’t want to risk further snags, so I moved to another, more familiar pond, which kicked out 14 more bass. This put me at 232 total fish—all on the single softbait.”

After catching another dozen bass on September 15, Waldman sat just two fish short of the record. September 16, Waldman landed 5 more bass, re-tying frequently. “Each of these bass had inhaled the bait deeply. So,I decided to re-tie again. And 11 fish in—sitting at 255 total— I’m about to pay for my excessive caution. I cut the bait off and slid a bunch of moss off the line. Not thinking, I flicked the moss off my fingers and at the same time, the bait goes flying with it—over the side of the boat and into the drink. I’m sure the look of horror on my face had to have been priceless.

“Though I had been hoping to exceed the record by 20 fish or so, I realized this was all mostly for fun—a really enjoyable quest that kept me entertained and ready to go out fishing again the next day.

“The record now stands at 255 fish. Maybe next spring, when the bass are really chomping, we’ll issue a 300 Bass Challenge. Pretty sure the right ElaZtech bait could get it done.”