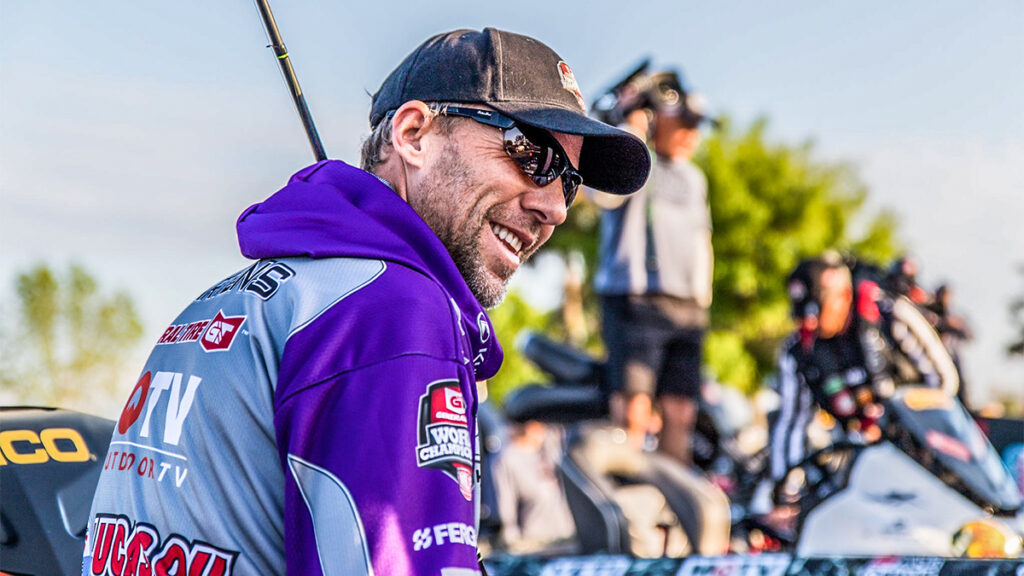 When I was recruited to fish on my college’s bass fishing team, I simply thought it would be a fun way to pass the time on the weekends. I didn’t follow tournament fishing very much at the time; my only knowledge of fishing consisted of my old 1987 Ranger and fishing every day after (and sometimes during) class.

With that being said, I did well enough in some qualifying tournaments to earn the privilege of traveling to my first college bass fishing tournament. It was on Logan Martin Lake in Pell City, Alabama and it was such a rush for me. I didn’t know what I was doing but my partner and I ended up finishing somewhere near the top. I can’t really remember the exact place we finished.

But I do remember one thing. Out of all the topwater fish we caught during that November week as the Alabama leaves changed and littered the water’s surface, I mainly remember my interaction with Aaron Martens. The way he treated all of us made me want to pursue this as my career. I didn’t care if I fished professionally or simply wrote about it as I do now. But I wanted to make people feel the way he made me feel.

Included, important and cared about.

Aaron was asked to by Auburn University, the organizer of the tournament, to be the weighmaster for the event and I won’t lie to you; I didn’t know who the heck he was. I was just a fishing rat who was fishing too much to watch the professionals on television. But man, all of my buddies were so jacked up that he was there.

After my partner and I weighed our fish, Aaron came up to us to shake our hands and congratulate us on our finish. I will never forget that handshake because his hands were absolutely enormous; it felt like I put my hand in a baseball glove.

More importantly, however, I’ll remember the intention behind that handshake. It wasn’t a passive handshake, if that makes sense. There was meaning and connection behind his gesture. He genuinely cared about how our day went and he cared about how we caught our fish. If more folks had the intent Aaron had upon meeting new people, the world would be an infinitely better place.

If my memory serves me right, I think Auburn had some snacks and drinks for everyone after the weigh in. This was at the very beginning of college fishing so these events weren’t as fancy as the new ones probably are. But nonetheless, we had a great time catching up with our fishing buddies from different schools as we got our old boats cleaned up for the Sunday evening drive home.

During this fellowship, Aaron could have bolted and headed home to his family. He did what he was asked to do and essentially, his job was done for the day. But he didn’t do that.

Again, let me repeat the word.

And he did so with intent.

He invited us to his tow vehicle at the time; it was one of those diesel-powered Ford Excursions and the back was just filled with tackle. It’s important to note, however, that it wasn’t pre-made promotional boxes with which he was provided by his sponsors. This was his personal fishing tackle. Everything was organized perfectly, it was all labeled and again, it was his. It wasn’t an afterthought. He brought this fishing tackle on purpose.

As dozens of us huddled around the back of his Excursion as the cool fall day slowly turned into a chilly fall night, Aaron talked to us. He taught us. He explained his decades of knowledge as these dirt-poor critters soaked in every single word he said. He taught us about topwater baits, crankbaits and finesse fishing. He started digging into his personal tackle stash and handing baits to us and suggesting how we should use them in our upcoming tournaments.

I learned a lot about fishing that afternoon and evening. Heck, a lot of it went over my head because as you know, Aaron’s bass fishing knowledge was otherworldly. But aside from the fishing lessons I learned that day, Aaron taught me something much more important.

Love for people and intent.