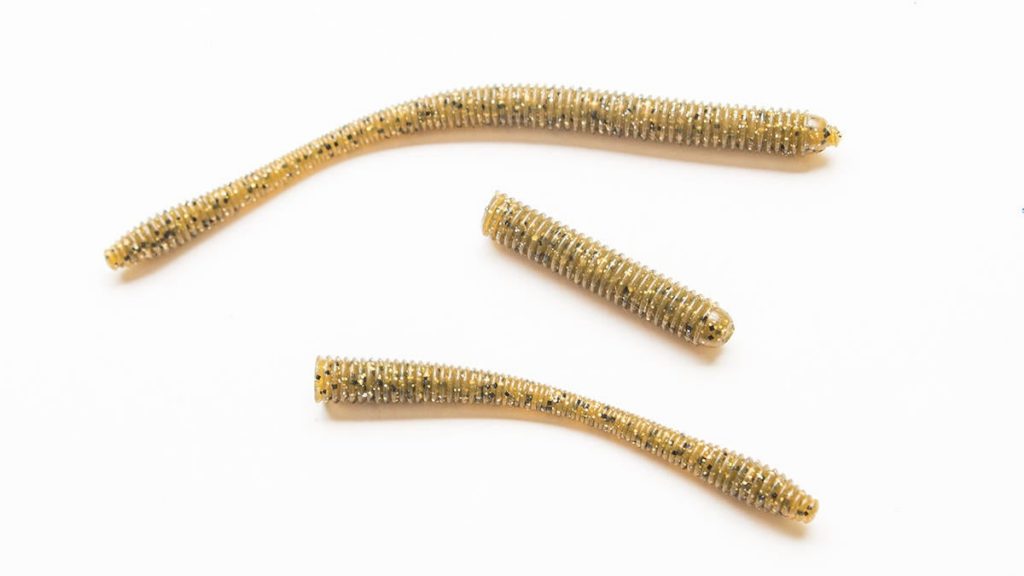 A shaky-style-jig-and-worm rig has been part of Midwest finesse anglers’ repertoire since the late and great Chuck Woods of Kansas City, Missouri, was building the foundations of Midwest finesse fishing in the 1950s and 1960s. In fact, Woods is credited for creating the angling world’s first shaky-head-jig-and-worm rig, and it was a Texas-rig jig with an aspirin-style head. And Dwight Keefer of Parsons, Kansas, used Woods’ jigworm rig to win the World Series of Sport Fishing at Long Lake, Wisconsin, in October of 1967, when Keefer was a sophomore at the University of Kansas. And Drew Reese of Rantoul, Kansas, used it when he competed in the first Bassmaster Classic at Lake Mead in 1971.

Thus, whenever veteran Midwest finesse anglers spot a new shaky-worm rig, usually one of them will contact us and suggest that we should publish a gear guide about it. And when one of them saw two YouTube videos about 6th Sense Fishing Products’ 6.3-inch Divine Shakey Worm, this angler alerted us.

Subsequently, we contacted Casey Sobczak of Willis, Texas, who is president of 6th Sense Fishing Products, and members of his staff. And they mailed us a package to work with and create a gear guide about it.

Our measurements revealed that it is 6 1/8 inches long.

It was not created for Midwest finesse anglers. Instead, it is a power angler’s rendition of a soft-plastic finesse worm and designed to be affixed to 6th Sense’s Divine Shakey Head jig, which sports hooks that range in size from 3/0 to 6/0 to 7/0. Therefore, as Midwest finesse anglers have done since the days of Chuck Woods in the 1950s and 1960s, they will customize the Divine Shakey Worm by shortening it, and of courses, they will affix it to a light-weight mushroom-style jig with an exposed hook.

The tip of the Divine Shakey Worm’s anterior section possesses a domed-shape head. At the head’s junction with the torso, it has a width of slightly less than 5/16-inch and a circumference of about one inch. Its epidermis is smooth. The top of the head has a small indentation, which is where Midwest finesse anglers will insert the mushroom-style jig’s hook and bait keeper.

Except for its head and tail, the anterior and posterior sections are encircled with scores of ribs or ridges, which are said to accentuate the torso’s ability to undulate and quiver alluringly. There are about 15 ribs per inch. And it is devoid of a clitellum, which many soft-plastic worms possess. From the tip of its head to the tip of its tail, the torso possesses a round shape.

At the junction of the anterior and posterior sections, the torso has a width of one-quarter of an inch and of one circumference of one inch.

The posterior section is 3 1/16 inches long.

The radical changes in the widths and circumferences of the posterior section helps to accentuate the gyrations of the torso.

The tip of the posterior section is graced with a miniscule dome or mushroom-styled tail. Its epidermis is smooth. It is about 3/16-inch wide with a circumference of about 3/4-inch.

It is not infused with scent. And even though it is impregnated with salt,
it is very buoyant, which will accentuate its ability to glide beguilingly when Midwest finesse anglers employ the swim-glide-and-shake retrieve.

You can find them at these retailers: