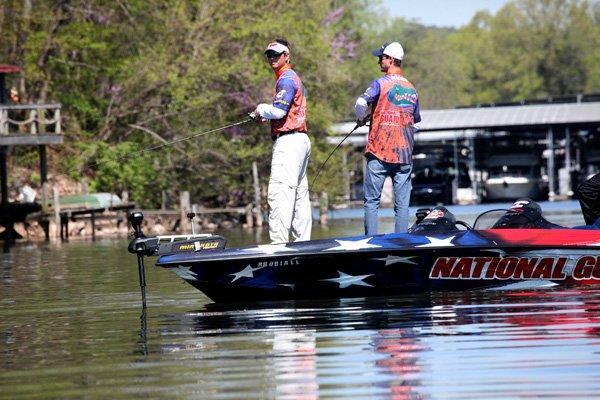 Can you imagine being told that you could play in the NBA Finals or the Super Bowl and all you had to do was play on your college team and be in the top five in a couple tournaments and win the last one and you would be in the Finals against Kobe Bryant or Lebron James? Or maybe you’d be covering Randy Moss and trying to stop Tom Brady.

The thought seems laughable. But it’s a reality in the fishing world for one lucky angler. Jake Gipson and his bass fishing tournament partner Matt Wercinski of the University of Florida are going to be living the dream in August. Jake earned the right to fish as a pro in the Forrest Wood Cup on Lake Lanier later this summer when Gipson and Wercinski bested the rest of the FLW National Guard College Fishing National Championship field on Lakes Loudon and Tellico in Knoxville last weekend.

The road to the championship was tough, but it obviously prepared them for the final event and gave them the confidence to close the deal in the end. They qualified for the regional by winning the second qualifying event of the Southeast Division on Santee Cooper last May. They earned $10,000 for their school and their club to split in that qualifier.

Next they fished the regional on Lake Monroe in Sanford, Fla., and won that event as well, earning another $25,000 for their school and their club. That qualified them for the FLW National Guard College Fishing Championship in Knoxville. They went to that event and won an impressive third event of their first season fishing the circuit to take home $100,000 to split between their school and their bass club. Plus each angler got a $2,500 gift card to Cabela’s and a $500 check from Ranger.

We caught up with Gipson yesterday after letting the emotions settle from their impressive come from behind win on Loudon/Tellico.

“It’s just now finally sinking in what has happened,” Gipson said. “Actually it really hit me when I penciled in the Forrest Wood Cup on my calendar.”

Winning three events in a season is a monumental task, and then winning the championship against the best college teams from coast to coast really makes the feat that much more remarkable. But Gipson and Wercinski definitely put in their time.

“Matt and I spent our spring break fishing on Loudon/Tellico and then again the week before the cutoff,” Gipson said. “We ran probably 35 miles of the lake and hit more than 30 points just hoping to put something together. After hitting nearly 30 points we hadn’t found much, but the last few points we found in practice were holding some quality fish that were biting a jerkbait.”

On day one, the team hit their better points without much success, but late in the day they were able to target a couple key spots on two points and caught some better quality fish. But after one day of fishing, they found themselves in 11th place with a meager 6 pounds, 6 ounces.

“At that point we weren’t even sure we could make the top-five cut,” Gipson said. “We decided to hit those two better points first thing on day two, and it all turned around for us. Matt caught a 6-pound smallmouth almost immediately and later followed it up with a 5-pound largemouth. That’s when we knew we could do this.” They not only did it, but they posted the biggest limit of the day with 15 pounds, 9 ounces – vaulting them into second place.

Gipson and Wercinski primarily relied on jerkbaits the first two days. Their points extended out into the lake quite a ways and were 5 feet on top and tapered out to 20 feet. They would set their boat out in 15 to 20 feet and cast across the points, pausing the bait a long time on top of the points. Most of their bites came in the 8- to 12-foot range. Wercinski threw a Bomber Long A Suspending Jerkbait in Pure Pearl. Gipson alternated between a Lucky Craft Slender Pointer 112 in Chartreuse Shad and a Spro McStick in a similar color.

They also managed to catch a good keeper pitching a jig on a riprap bank that second day, something that later proved to be important.

They started day three with a renewed confidence after coming from 11th place to second place going into the final day. They again started on their lucky points, but the action really tapered off. Now they were catching all short fish and decided to make a move up river where they had found a lot warmer water with some color to it. Their best stretch had riprap on the bank but also had a gravel bottom with laydowns and wood mixed in.

“We found that area in practice and it was 7 or 8 degrees warmer than the rest of the lake,” Gipson said. “We knew if the fish started moving up during the tournament that would probably be one of the first areas to see fish.”

Gipson pitched a 1/2-ounce black and blue jig with a Berkley Chigger Craw trailer to the bank and wood along it. Wercinski did the same with a Senko rigged on a weightless hook. Gipson hooked up with a solid 4-pound-plus fish late in the day that ultimately put them over the top. Their limit weighed 7 pounds, 11 ounces that third day and was enough to win the event by a mere 9 ounces.

Gipson’s big fish the last day was enough to edge his total weight for the tournament past that of his partner’s for the coveted pro spot in the Forrest Wood Cup. Wercinski will also be fishing the Forrest Wood Cup as a co-angler. But that’s how the two of them wanted it. In fact, they asked beforehand if Gipson could just be named the pro if they won ahead of the tournament. But the rules stated whichever team mate caught the most weight would be named the pro and the other the co-angler.

“I would have been just as happy if Matt were fishing as the boater,” Gipson said. “He wanted me to go as the boater and I would have been happy if he was. Matt’s a great fisherman in his own right. I just happened to get a big fish the last day that edged me ahead of him even with that monster bag he had on Sunday.”

Now it’s on to Lake Lanier for the unassuming heroes of college fishing. As a funny side note, Gipson and Wercinski actually went to high school together but really only knew of each other through mutual friends. Turns out one such mutual friend had a lake house on Lanier one summer and invited both his friends, Gipson and Wercinski up to fish with him. The two hit off and have been fishing together for the last four years. Ironically they return to the site where their fishing friendship was kindled this August for the Forrest Wood Cup.

That was also the last time either have fished on Lanier.

“I’ve been doing some internet scouting and have some maps on order,” Gipson said. “I’ve seen all these guys on TV and now I’m going to get to fish against them. It’s just a once in a lifetime opportunity. Something I’ll remember for the rest of my life.   Fishing on La

nier will be a lot different than what I’m used to in Florida. But I’m looking forward to learning a lot and meeting all the pros.”

As it stands now, Gipson is set to graduate this semester with a degree in Industrial Systems Engineering. He plans to take the next year off and fish a little and enjoy himself before going to law school the following year. He plans to look at the Bassmaster Opens and FLW American Fishing Series circuits and fish some of those events next year.

“It’s hard to say how doing well in the Forrest Wood Cup would alter my future plans,” Gipson said. “If I could somehow find a way to fish for a living, it would be a dream come true. I’ve been watching these guys on TV all my life. If I was able to do well and have some opportunities open up that would be amazing.”

And Gipson wasn’t without some good advice for up and coming college anglers.

“The first thing I would tell guys who are fishing these circuits is to do your research. You’ll fish so many places you’ve never fished before, but there are so many good resources online to get you familiar with a fishery. The second would be to stay focused and fish hard all day long. It’s easy to taper off and lose concentration late in the day when it gets tough, but if you can stay focused and keep fishing hard, you’ll get those few key bites. Mental focus is really important.

“FLW and the National Guard have done a GREAT job with the college series. This felt like a true national championship because of the divisions, the regionals and the camaraderie that has built up between schools. We love fishing against Auburn. They’ve become our rivalry school. They beat us at Okeechobee. We barely beat them at Monroe and at the championship. They are great guys and having that rivalry makes it fun to be out on the water. My only regret is that I’m a senior. I wish I was a freshman and could do this a while longer. “