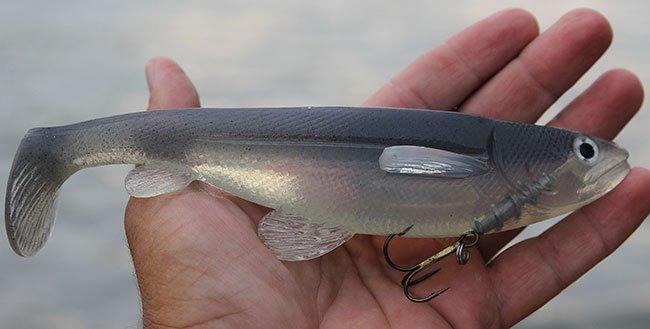 A swimbait has played an increasing role in bass fishing for the last couple of decades. For a long time it was just big trout swimbait chucking enthusiasts out in California. But more and more the big baits trickled eastward and got smaller as they did. Now 4- and 5-inch hollow bodied swimbaits and soft jerkbait style swimbaits with boot tails are staples in bass fishing tournaments and just fun fishing around the country.

However more anglers away from the west coast have adopted big swimbaits, and more anglers realize a big swimbait can catch limits of “ordinary bass” as well as a giant kicker bass at any given time. And big is relative. Some guys will consider a 6-inch swimbait big while others consider that small.

One angler who considers himself a student of swimbaits is Alabama Elite Series pro Randy Howell. As a tournament angler, Howell has the fortune to be able to test swimbaits and their effectiveness on a wide range of fisheries across the country. That has led him to many useful discoveries and observations about using big swimbaits to catch quality bass.

“People see that swimbait I throw a lot, and they think it’s really big, but I always tell those people that I catch 2-pound bass up to 8-pound bass on the swimbait nearly everywhere I fish,” Howell said. “And I’ve seen bass eat shad much bigger than this. It works just as well for average keepers as it does for producing a kicker bite. Really it’s a matter of whether the bass will be tempted for a big meal or not. Not how big the fish is.”

Howell has been fortunate to hook up with Livingston Lures this past year and work closely with legendary swimbait creator, Jerry Rago to design a new line of swimbaits to be released very soon called the Livingston Lures Randy Howell Flat Top Swimbait by Jerry Rago. That’s a mouthful for anglers and the bass. But the allure of the bait is in the flat-top design

“I really became a student of swimbaits when we traveled out west in 2007, and Steve Kennedy caught that huge winning weight of 122 pounds on swimbaits. Since then I’ve bought every swimbait I can get my hands on and have spent a lot of time experimenting. I really fell in love with those flat-top style swimbaits like the Top Shelf swimbaits because they seemed to balance well and fit my style of fishing. Now I’ve got this new Flat Top from Rago that has that right action and has saved me in a bunch of big events.” 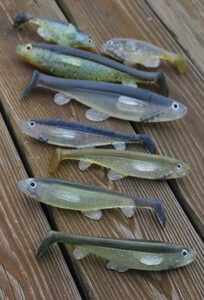 A good swimbait displays a balanced roll coupled with a good tail kick. When he’s fished some of the more streamlined baits, the tail moves naturally but the body doesn’t as much. Then other baits roll and kick too wide and slow. With his new Flat Top, he gets the best of both worlds with a good balanced body roll and a fast kick on the tail.

With the slower retrieve Howell likes, he keeps his swimbait in the 2- to 5-foot depth range and feels like he can call bass from a great distance because of how the bait rolls, flashes and steady kicks.

“At Bull Shoals the first day this season, I was leading the tournament and all my bass came on my Flat Top swimbait. There was a slight chop on the water and because that water is so clear, that got those bass really feeding. On the second day the skies were high and the water was flat calm and the bass followed and nipped curiously rather than choking the bait like the day before. It taught me that you’ve got to throw it more, but it’s not a cure-all, catch-all either. Experimenting has been a big key for me.”

Keep one tied on all the time

Big bass are often territorial. Because of that, Howell keeps one on a rod on the ready everywhere he goes now. It is a visual bait, so if you’re fishing in dirty, muddy water, it’s probably not the best option. However he’s caught big bass in Tennessee River impoundments, clear water highland Ozark impoundments, Alabama River impoundments, smallmouth lakes up north and more.

“I’ve talked with a lot of the expert swimbait guys out west and the good swimbait guys on the Elite Series like Steve Kennedy, and they all agree that some days the bass just won’t eat it. But it’s not necessarily based on conditions. So you have to experiment all the time and see if they will eat it on certain days or not. That’s why I have one with me so much now. It’s just become another go-to option for me.”

Howell  also learned that it’s a great bail out bait. He’s had several average days turn into “making-the-cut” days because of a couple key bites on his flat-top swimbaits. Because of that, he has no hesitation picking it up and fishing with it for a while. He attributes much of his success last year in the AOY race to his use of that Flat Top swimbait.

Howell tests varying his retrieves on multiple fisheries, but always seems to come back to one presentation â€” slow and steady. He wants the swimbait to thump tantalizingly just over their heads and give them plenty of time to lock on the target. Slow and steady still draws savage strikes though because the fish are reacting to the size of the bait it must kill to eat.

Fishing swimbaits effectively requires considerations on color, tackle and where to position the bait relative to the bass. 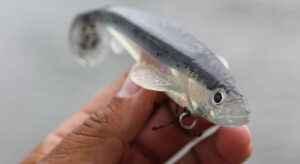 In super clear water, Howell finds translucent baits produce better than solid colors. And when he fishes water with some color or stain he’ll opt more for a shad type color with a grey or white base with Tennessee Shad type gray or blue backs to give the bass more of a profile to find.

Where he fishes the baits depends obviously just like other lures and techniques. He’s caught bass from the early prespawn period through late fall on larger swimbaits. One thing he does often is parallel banks and cover.

He might parallel bluff banks like he did on Bull Shoals this season. Or he’ll move out a little deeper and parallel deep weed lines and fish just above the weeds on the edge. Or maybe he will line up on a point and throw down the sides of it instead of across it.

Another productive area for him has been expansive flats. Sometimes you can’t cover big flats effectively because there is so much water, but that’s exactly where big bass like to roam because they have so much area to forage. With a big swimbait he can throw it a long ways and cover more area in one cast.

Howell believes you need more speed than a 5:1 reel when fishing swimbaits. He likes to reel them slow and the 5:1 could help with that. But when a fish strikes, he has to take up a lot of slack and drive the hook. You can’t be as responsive with a 5:1 reel when you need to catch up to the strike and get quick leverage on a big bass. 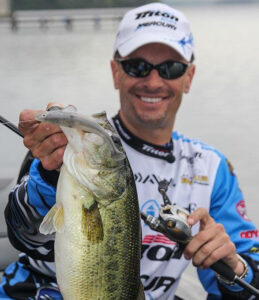