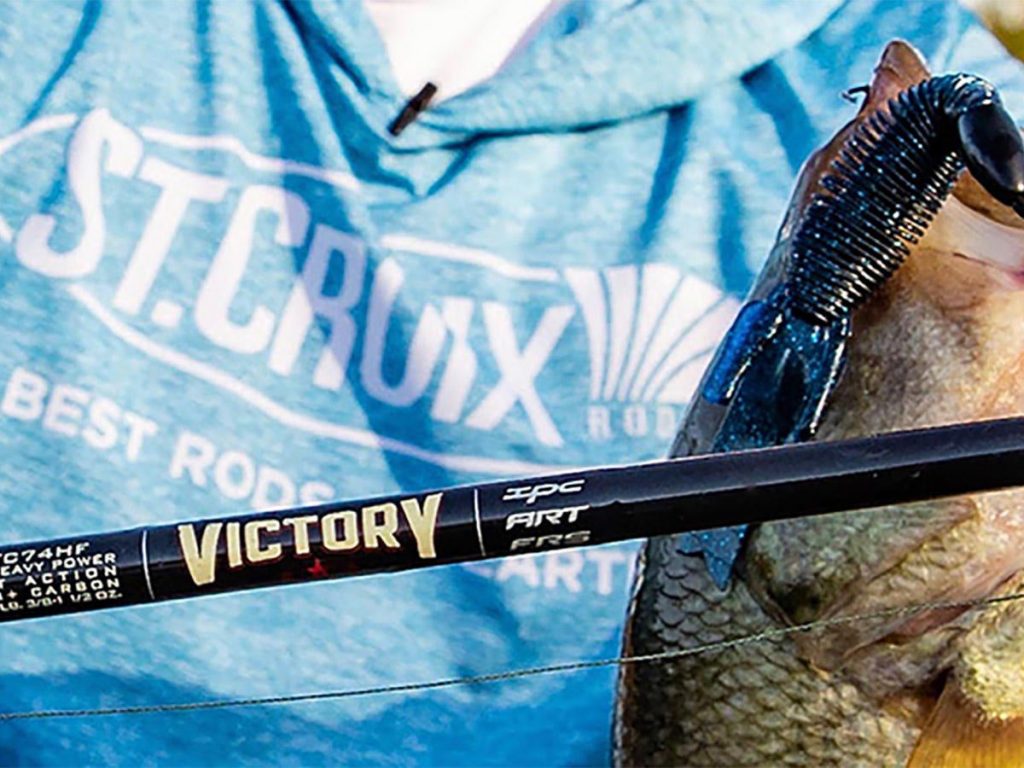 So, how does one go about making the right choice?

There are many variables that affect a fishing rod’s performance and price, including materials, components, engineering, manufacturing technologies, and much more. But, moving into the more-fundamental realm of what a fishing rod actually needs to do in a given situation, basic performance is dictated by three primary variables: length, power, and action.

Length and power are almost always printed somewhere on any fishing rod. St. Croix reveals all three. In addition to the range of line and lure weights the rod was designed for, every St. Croix spinning and casting rod features a distinct model number that clearly reveals its length, power and action. For example, the characters in MJS70MF stand for Mojo Bass (series), spinning (type), 7’0″ (length), medium (power), and fast (action). 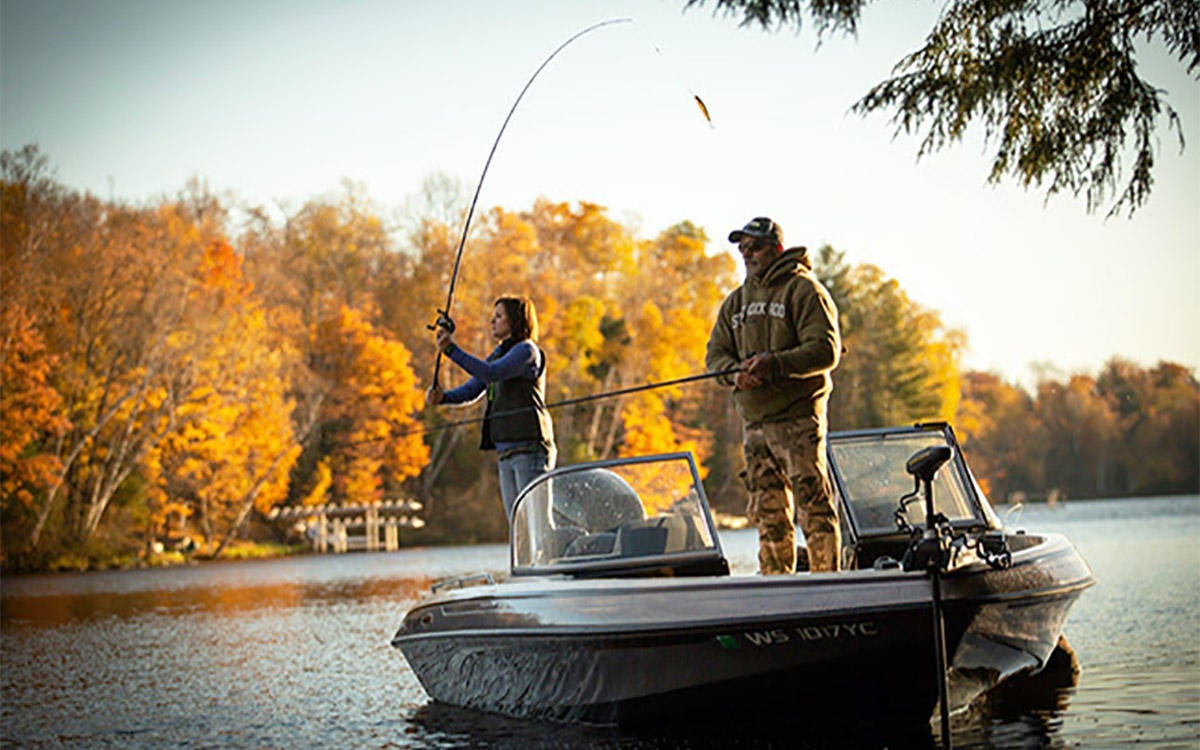 While it often takes a backseat to power and action considerations, length is a very important variable that will affect how a rod performs in any fishing application, as well as how comfortable the angler will be while doing it. While there are extremes on each end of the spectrum, most modern fishing rods are somewhere between 5’6″ and 9′ in length, and the vast majority are in a sweet spot between 6’6″ and 7’6″ long.

With respect to casting, rod length can affect both accuracy and distance. Generally, a shorter rod allows for more accurate casting because it is more manageable and maneuverable. For this reason, a shorter rod can be a better choice when longer casts aren’t needed. But when anglers need to make longer casts – often in clear- or shallow-water situations – a longer rod provides the increased leverage to deliver the lure farther.

Comfort is another consideration in determining optimal rod length. We’ve already established that rods are levers and, therefore, longer rods are capable of creating more mechanical advantage. That said, anglers come in all different sizes, and smaller anglers will experience more torque and fatigue with longer, heavier rods. At this point, the consideration of rod length becomes one of personal preference. How much rod can you handle comfortably?

To wrap up our discussion on length, there’s a reason why so many modern fishing rods are between 6’6″ and 7’6″ long. It’s because a rod of this length does a lot of things – most of the things we’ve talked about above – really well. 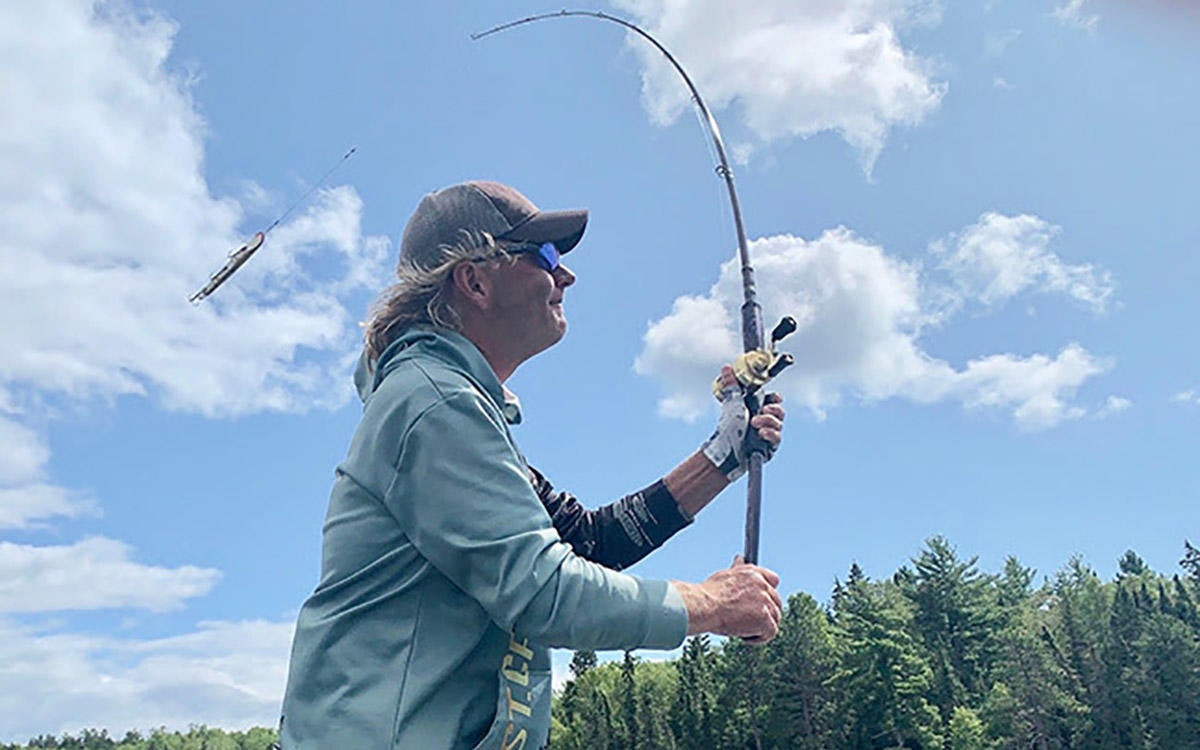 A rod’s power typically ranges from ultra-light to extra-heavy and refers to how much force it takes to flex it. Rod power is important for a several reasons. Most importantly, it largely dictates the range of lure weights and line sizes the rod was designed to cast, but it can also be used as a reference for the size and strength of fish the rod was designed to fight.

Power is an important factor in rod-selection because properly matching a rod to the type of line and lure that will be used is key to obtaining reliable performance. In other words, a light-power rod rated for 4-8-lb. line and 1/16-1/4-oz. lures would not be adequate to cast a 5/8-oz. spinnerbait for bass or present a 1-oz. jig for walleye. In this case, the underpowered rod could potentially fail and disappoint the angler. Similarly, a medium-heavy power rod designed for 8-14-lb. line and 3/8-3/4-oz. lures wouldn’t fail if used to present a 1/16-oz. jig for crappie, but it wouldn’t load or cast as designed, would be heavier and more cumbersome than the job requires, may tear the fish’s delicate mouth, and would also disappoint the angler.

At the least-stiff end of the power spectrum, ultra-light rods have the least amount of power and are suitable for presenting small baits on light line, generally to smaller fish. At the upper end, extra-heavy rods provide maximum power for presenting large baits on the strongest of lines to do battle with large predators. Medium-light, medium, and medium-heavy are the most popular rod powers and represent the sweet spot for most angling situations. 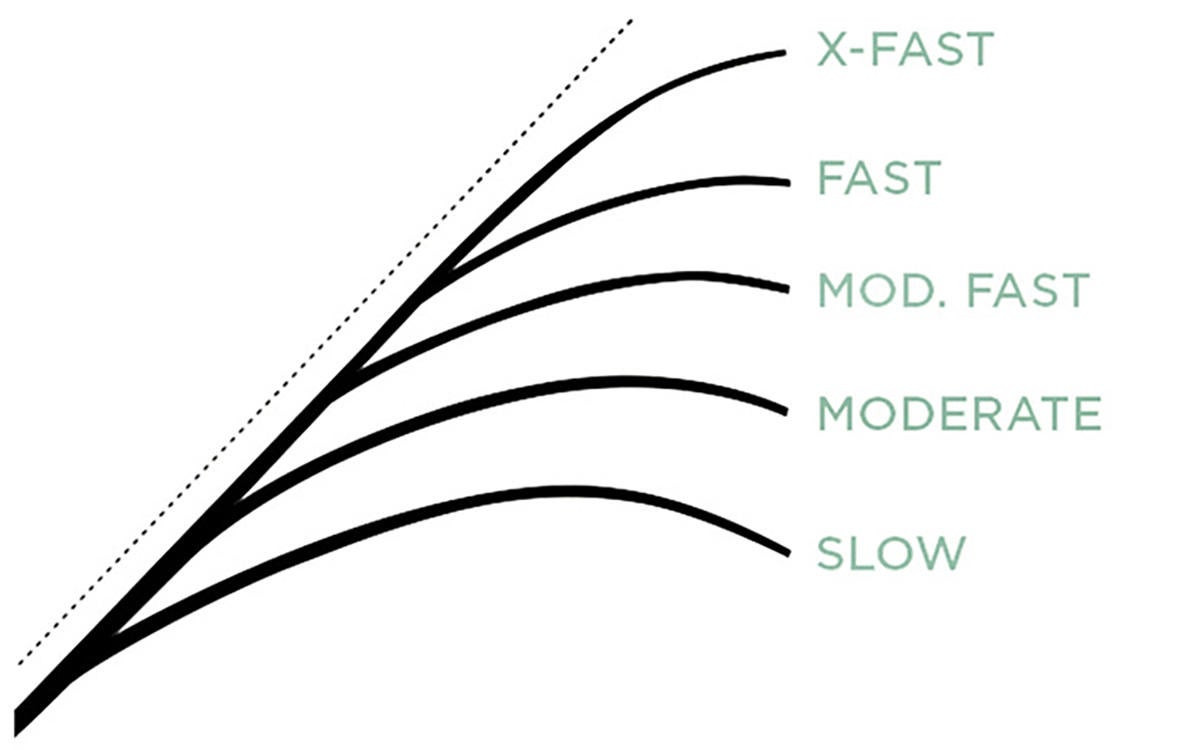 While power refers to how much force it takes to deflect or bend a rod, action describes where that deflection takes place along the rod’s length. A fishing rod is most powerful in its butt section, and that power diminishes incrementally the closer you move towards the tip. Different actions move those transition points. Faster action rods flex mostly near the tip, providing fast access to the rod’s powerful mid and lower sections. Moderate action rods are more forgiving, bending past the tip and into the middle, while slower action rods flex all the way down into the butt section. Fishing rod actions range from slow to extra-fast. Since action is expressed as a function of time, think about a rod’s action as how quickly you can access the rod’s power when you apply force, either to cast, to move the lure in the water, to set the hook, or change a hooked fish’s direction. Another way to visualize rod action is think about the amount of time it takes for a rod to recover – or straighten out – after applying such a force.

Extra-fast action rods deflect near the tip, and then taper very quickly to a stiffer mid and lower section. This design generally delivers maximum sensitivity, great casting accuracy, and the ability to make fast and powerful hook sets. Extra-fast rods can be used in a variety of fishing situations but are most popular with single-hook applications like worming and jigging.

Moderate action rods bend past the tip and into the rod’s middle section. For this reason, moderate action rods are even more forgiving, which makes them a great choice for presenting moving baits or “reaction” lures like crankbaits – especially those equipped with treble hooks. In addition to providing good casting distance, a moderate action rod does a great job absorbing and softening the often-violent shock a fish imparts on the line and rod when it hits a moving bait. Ultimately, it’s this softer forgiveness – bending into the middle – that keeps the hooks in the fish’s mouth not only on the strike, but also throughout the fight.

Slow action rods bend way down into the butt section. This action was very popular in the past when rods were primarily made from bamboo and fiberglass but are relatively rare in today’s fishing applications due to the use of modern carbon and composite rod-building materials. Slow action rods are good for fighting larger fish on light line and are typically only seen in some specialized ultra-light and fly-fishing applications.

Length, Power and Action Made Easy 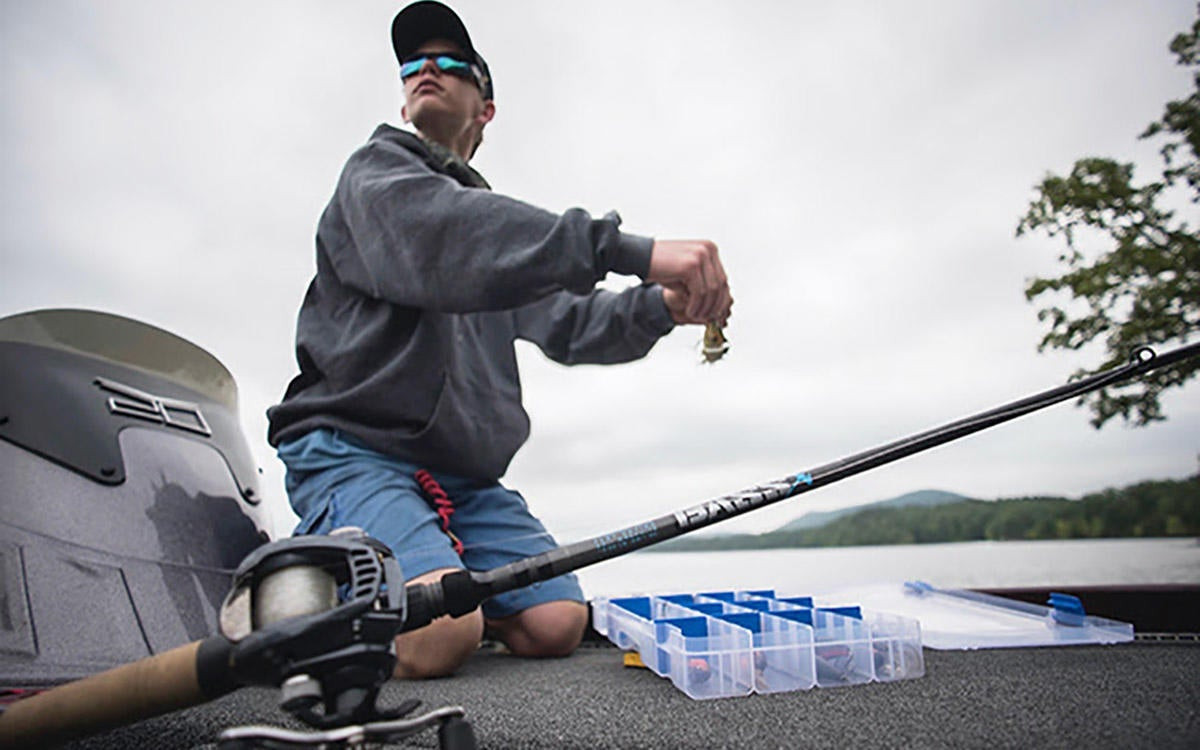 Now that we understand the individual roles length, power and action play in selecting the right fishing rod for the fishing situation at hand, how do we consider them in totality? Action and length are good places to start, but St. Croix does a couple unique things that make rod selection even easier.

St. Croix makes many different rod series – Bass X, Mojo Musky, Panfish, Trout, and Eyecon (‘eye as in walleye) to name a few – that have the target species right in the series name. All the individual rod models in these named series are optimized for presentations that target those fish. As mentioned previously, all St. Croix spinning and casting models are also marked with line- and lure-weight ratings, so anglers can easily choose the rods that will perform best with the lines and lures they plan to use most often.

It’s also worth mentioning that some of St. Croix’s most popular lengths, powers and actions are available in different St. Croix series to provide anglers additional choices with respect to performance and value.

Finally, many individual rod models in several St. Croix series such as Eyecon, Mojo Bass, Mojo Bass Glass, Mojo Musky, Victory, and Legend Tournament are also printed with a name that corresponds with the specific presentation they were designed for. This helps take the guesswork out of rod selection altogether. It’s important to note, however, that any rod St. Croix names for a specific presentation will excel in other techniques and applications, too. The 74HF casting model in the Legend Tournament Bass series, for example, is named Slop n Frog because it performs exceptionally for fishing frog lures on top of heavy vegetation, but the same rod is a fantastic choice for fishing heavy football jigs on the bottom.

With so many individual anglers pursuing a multitude of different fish species with a wide variety of lures in diverse locations and settings, it’s easy to understand why St. Croix crafts so many different rod models. It isn’t to confuse anyone; these are the choices our anglers and their fishing situations demand. Your St. Croix Dealer or the St. Croix Guide Center can always help answer any remaining questions you may have about rod selection. Learn more at stcroixrods.com.