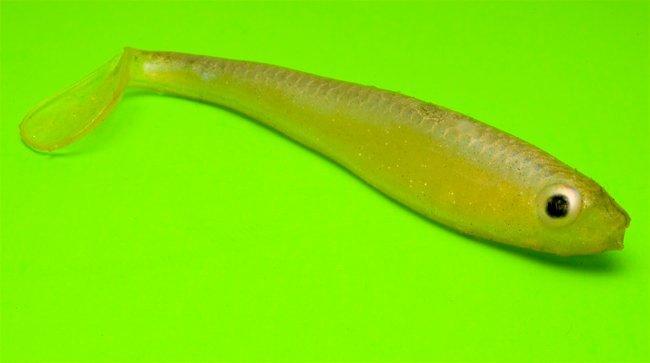 Five down and 15 to go. Number 15 is going to stir up the conversations now as we inch closer to our top 10 in the list of 20 Most Influential Bass Fishing Lures. No. 15 is one of the newer lures on the list. And while it wasn’t a brand new creation, it was definitely a trend setter.

The Basstrix Paddle Tail swimbait was definitely not the first swimbait made or even the first lure to incorporate a paddle tail. However the size and dual pour plastic bodies created a buzz in the angling community. But its influence was two fold.

After some major tournaments were won on the Basstrix swimbaits, the demand went through the roof, more than the manufacturer could manage in fact. That lead to an enormous influx of imitations from other manufacturers looking to fill the void with consumers demanding these handpoured swimbaits.

But it also had a lasting effect in that it brought western swimbaits to the east and anglers began to incorporate swimbaits in their normal arsenal. Of course many of the purist swimbait sticks out west scoffed at the popularity of these swimbaits as they were hucking huge Huddleston Trouts and 10-inch Ospreys on extra heavy tackle and catching monster bass.

But the Basstrix “bridged the gap” so to speak between the big swimbait big bass guys and the common every day angler who throws more realistic sizes when chasing bass with artificials. Bass will eat those bigger baits, but more bass seemed to readily scarf the 5-inch Basstrix Paddle Tail Swimbaits.

Now this size and much larger swimbaits have become a mainstay in angler’s arsenals coast to coast. It’s not just a western technique anymore. Even big bait huckers should thank Basstrix for making swimbaits more acceptable to all anglers.

For these impacts, we selected the Basstrix Paddle Tail Swimbait as our No. 15 Most Influential Bass Fishing Lure.