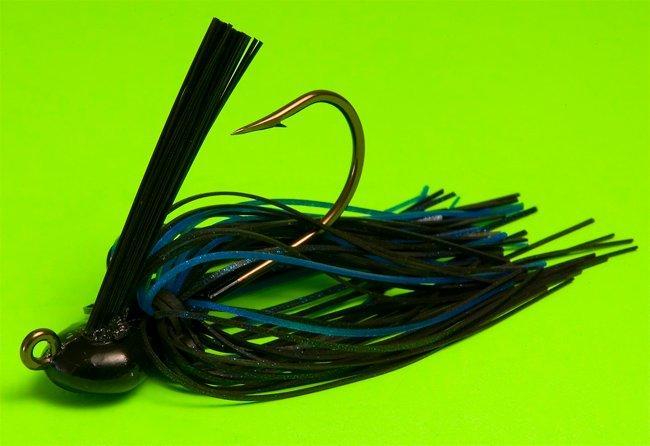 We’re not sure if Bob Carnes knew what he had immediately when he created the Arkie Jig. But we do know what he had was something incredibly special to bass fishing. Carnes was building baits in Arkansas and was looking for a way to make jigs more weedless and attractive to bass. He thought if he could make a balanced head for his bucktail jigs and add a brush guard to protect the hook he could fish his jig in more places.

He saw a TV show where they were using a jig with a fiberguard. At the time he was looking at wireguards for his jigs but the demand for the fiberguard after that TV show aired forced his hand and he had to figure out a way to mold a fiberguard into leadhead. All the while he was tweaking on the shape of the head to keep it from snagging. It started more like a banana head, then he shortened it and flattened and widened it to make keep it level and upright which was critical to avoiding snags.

Once he got the jig head design and fiberguard correct he began tying the first jigs with bucktail. But he saw the Gilmore Lure Company Spinnerbait had some sort of rubber bands hanging off of it. He wasn’t sure what it was exactly or even how to get a hold of the rubber. He knew underwear had elastic in it as did women’s girdles. They actually traced the girdle’s rubber back to a rubber company and got them to color some rubber for them.

The rest as they say is history, but the lasting effect of some simple necessity has continued for more than 45 years. A skirted snagless jig has arguably won more national tournaments than any other lure. There for a time in the 80s, every tournament of any significance was being won on them. In the early days of the B.A.S.S. Tour there were something like five tournaments in a row won on Carnes jigs and no one told anyone. They were keeping it secret.

Bo Dowden won the Classic in 1980 on a brown and orange Arkie Jig and the boom for Carnes’s snagless jig was going full steam ahead. The jig was carried in Walmart Stores in the early 70s when it was still just a regional chain. And after word spread and Walmart grew, access to his Arkie jig was much easier.

Now just about every jig manufacturer and component shop carries the Arkie style head for flipping. It was a lasting innovation that is every bit as good today as it was 45 years ago.

For this reason, the Arkie Lures Arkie Jig, is our No. 2 Most Influential Bass Fishing Lure of All Time!