Wiley X hit the fishing scene a few years back, and they have continued to make their presence felt in the community.  Owned by military veterans, Wiley X has prided itself in producing eyewear that many in the United States Military as well as Law Enforcement agencies across the country count on.  The California based company also caters to motorcycle and bicycling enthusiasts as well, largely because the impact resistance of their HVP (High Velocity Protection) Lenses.

For the fishing community, Wiley X took the standards they set in protection, and added the same care to the polarization they use in their lenses, as well as the lens colors they chose.

Polarization is usually referred to when anglers talk of sightfishing in the springtime for spawning bass.  It helps to reduce the amount of glare on the surface of the water for the sky, allowing anglers to see through to the bottom.  However, it is not the only time polarized lenses are key it can also help anglers make out subtle differences in bottom composition, weedlines and cover – all of which can put more fish in the boat.

Wiley X utilizes eight layers of materials in their fishing glasses, which provides a tremendous amount of glare reduction, and aids in providing a clear view of the underwater environment.  Their lenses and frames also provide ANZI 87 level protection, meaning they won’t shatter when struck with flying objects such as sinkers, lures and insects.

Like most other sunglass manufacturers, Wiley X produces many lens colors designed to meet the needs of anglers during all conditions. With their Smoke Grey, Smoke Green, Bronze, Blue Mirror, Silver Flash and Amber / Green Mirror lenses, they have something for every condition.

Along with their vision and protective qualities, Wiley X has also been known as one of the leaders in fashion forward styles.  Utilizing sleek design based on the hottest trends in eyewear, Wiley X has become a strong competitor in the eyewear game.

In 2008, Wiley X added then reigning Bassmaster Angler of the Year Skeet Reese to their team, and a new project was born.

That project, which would culminate with the first public appearance of Reese in his new Signature Xcess glasses at the 2010 Bassmaster Classic on Lay Lake.

Xcess is a frame with the sporty and contemporary squared off shape of the frame that combines smooth lines with the thicker arms that have become popular in the past few years. The frames feature a glossy black finish, and are adorned with chrome trim around the hinge, and a first for the company, the WX logo on the temples is Reese’s trademark canary yellow.

For lenses, Reese chose to outfit Xcess the highly popular Amber / Green Mirror because of its visual acuity, as well as its unique appearance.  Xcess certainly fits Reese’s style, and is an eye catching pair of glasses. 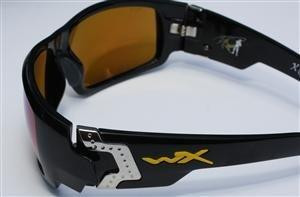 Along with the appearance of the glasses, Reese and the engineers at Wiley X created a pair of glasses with some well thought out, unique and functional features for the bass angler.

While squared off glasses are the rage, the large frame associated can sometimes create blind spots in peripheral vision.  Wiley X solved this problem by wrapping the frames around far enough than an angler doesn’t have to turn quite so far see to the edge of their field of vision.

This particular feature is especially useful when driving a boat, but also when fishing as it allows an angler to see a wider field of vision; which can be a help during times when bass are schooling.

The hinges on Xcess are unique in that the sides of the frames overlap the temples slightly, giving the glasses a more stable and secure feeling when they are worn.  It also seems to make the frames a little more durable at the point where so many glasses fail; the hinges, and it seems to cut down on additional glare from the side of the glasses.

The Amber / Green Mirror lens is specially designed to help anglers utilize the benefits of the amber colored lens in higher skies, while the green mirroring is engineered to amplify color contrasts, creating a higher definition of visual acuity. While most amber lenses allow 20% light transmission, This Amber / Green Mirror lens is unique, allowing 14% transmission in conjunction with the mirroring.

In our tests, Xcess met all of the requirements in multiple conditions, from low light cloudy days to sunny days with high clouds.  The one day that we were sightfishing in extreme bluebird skies in the late evening without shade seemed to create a little bit of a challenge to see bedded fish in slightly stained water, but a switch to Wiley X’s Reign glasses with Silver Flash lenses solved that.

Overall, the Wiley X Xcess performed exactly as we would have hoped in 95% of the conditions we have used them thus far, and would recommend them to anglers anywhere. At a retail price point of $146, these are a great value for a high quality pair of sunglasses.

You can buy them by clicking here.