For the longest time, I never used what many people would consider “high-end” fishing reels. Throughout my collegiate fishing days, my budget simply wouldn’t allow for it, so I used what was affordable at the time. I decided to splurge a bit, however, when Abu Garcia released their Generation 2 REVO SX reels, and I have been a believer in quality reels ever since.

It goes without saying that Jason and I couldn’t wait to get our hands on Abu Garcia’s new REVO STX Generation 3 Casting Reels. For months, we heard about the new features and improvements over their Generation 2 model, so when we got the opportunity to test them, we headed straight to the water.

The most noticeable difference in the new REVO STX is the reduction in weight from the previous models and the smaller form factor. With Abu Garcia’s new, compact design and utilization of advanced materials, these reels are more than 2.5-ounces lighter than the Generation 2 models. While this may seem like an inconspicuous difference, it is a 29-percent weight reduction, which is a huge deal. Whether you’re flipping heavy jigs or bombing lipless baits this fall, you will notice an enormous difference in the feel of these reels. Anytime you’re considering buying a reel, its weight should be a big factor. Less weight equals less fatigue, and less fatigue equals a more enjoyable fishing experience.

Abu Garcia’s older, Generation 2 REVOs had some issues with castability, but they have hit the nail on the head with this year’s REVO STX model. I wanted to cut through all of the fluff and go straight to the source of the problem, so I tied on a Shad Rap and turned all of the brakes off before I ever made a cast with the STX. My first cast sailed about 20-yards with no trace whatsoever of a “professional overrun,” which impressed us.

I’ve spent most of my testing throwing a 1/8-ounce shaky head, and the REVO STX has been nothing but outstanding. For even the most experienced anglers, a backlash is bound to happen every now and then, but I have still not managed to bird nest this reel, and I’m no KVD when it comes to casting.

We have also been impressed with the highly improved ergonomics of the REVO STX. This year’s model features a slightly bent reel handle and drag star, making it a pleasure to fish with. With the Generation 2 REVOs, I had a lot of problems hitting my knuckles on the drag star during big hooksets, resulting in multiple bloody knuckles throughout the year. Abu Garcia has fixed that problem this year, which can be attributed to both the ergonomic design and the new, softer reel grips. The form factor of the reel is lower to the reel seat making the reel even more palmable.

Abu Garcia also upped the ante on the Generation 3 REVO STX with an improved carbon matrix drag system. So far the reels feature a drag that spools line smoothly and evenly for a consistent drag throughout. 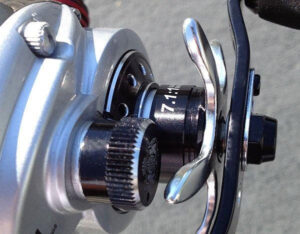 As I was fighting a 4-pounder in 20-feet of water during my testing, the drag remained steady and effectively absorbed the shock of multiple surges towards deeper water. In addition to the consistent drag, we haven’t experience any of the annoying aftermath of a big hooksetâ€”the line didn’t dig into itself on the spool, allowing us to get right back to fishing without having to shed line from the spool.

Finally, the Generation 3 REVO STX fits perfectly in your hand. It’s smaller than the Generation 2 REVO, and it’s easy to tell when you’re on the water. For the hardcore anglers out there, the smaller design allows for very comfortable fishing, leading to absolutely zero hand cramps, which can be worth its weight in gold during tournament situations.

Priced at $199, the Abu Garcia REVO STX Generation 3 provides some serious bang for your buck. With available gear ratios of 6.4:1, 7.1:1 and a beastly 8:1, the new REVO STX is a serious workhorse for serious bass anglers. You might check out our Vendetta review. We paired this reel with that rod for some testing and had some great results with bass like this one. 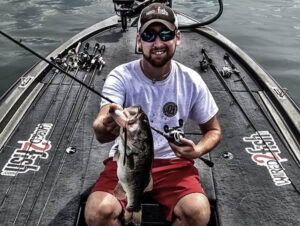 Check out new STX and the entire REVO Generation 3 line at Tacklewarehouse.com.