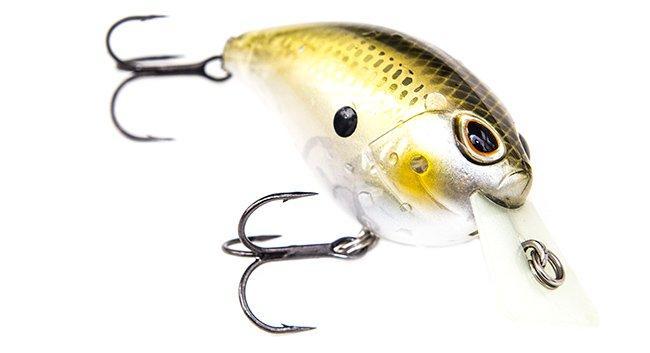 With a virtual buffet of shallow forage from which to choose, itâ€™s very common for bass to use shallow cover as ambush points throughout the fall months. Although flipping and pitching this cover is a popular technique, banging into it with a big squarebill is an excellent way to quickly develop a pattern and trigger some nasty reaction strikes.

The shallow bite has been pretty solid in my area for the past several weeks which has given me an opportunity to test the new Storm Arashi Rattling Square Bill quite a bit. After a lot of exciting fish catches and several hundred casts, I believe itâ€™s a very powerful tool for any shallow water bass angler.

There are five things that really impress me.

It swims straight regardless of retrieve speed

The Storm Arashi Rattling Square Bill features a self-correcting line tie, which allows it to run completely straight at all times. It doesnâ€™t matter if youâ€™re slow-rolling it or burning it with a high-speed reelâ€”it never spins out or helicopters.

This is probably my favorite feature of the Arashi Rattling Square Bill because a straight swimming action is indispensable in shallow situations. If your crankbait runs to the side, it has a tendency to roll on its side and spin-out on the waterâ€™s surface after a collision with cover. Not only does this look totally unnatural to the bass, but it wastes the better part of your cast.

Iâ€™ve been using the Series 3 lately, which runs 3 feet, and dredging it across the bottom in roughly 2 feet of water. Iâ€™ve had a lot of success with this technique because the quick and aggressive retrieve forces these bass to make a split-second decision without giving them a chance to consider eating it. This constant and intense bottom contact will cause many squarebills to run every direction but straight, but that hasnâ€™t been the case with the Arashi Rattling Square Bill.

Even after it hits a piece of cover, it kicks out just a few inches, but finds its center-point again within the same reel crank. This allows the lure to stay in the strike zone longer while maintaining a very natural â€œhuntingâ€ action that bass love.

I feel sorry for my squarebills because I beat the heck out of them. If I see a stump in shallow water, Iâ€™m going to slam a crankbait into it several times before moving on. Iâ€™ve subjected the Arashi Rattling Square Bill to this same abuse and I cannot make it run crooked. Iâ€™ve repeatedly hit it against seawalls, dock posts and shallow riprap and it still runs perfectly straight.

Like I said, I put my squarebills into the thickest stuff I can possibly findâ€” itâ€™s how Iâ€™ve had some of my most memorable days on the water. Iâ€™m a picky guy when it comes to squarebills because I need them to be tough. I donâ€™t see any point in purchasing one if it falls apart after just a few days of fishing.

Iâ€™ve always enjoyed using squarebills with circuit board lips. I feel like they tend to â€œbendâ€ a bit more throughout the retrieve, creating a more dramatic hunting effect. The problem is, however, some of these circuit board lips are pretty darn fragile. From what Iâ€™ve seen thus far, however, the Arashi Rattling Square Billâ€™s lip is very durable and withstands abuse excellently. There are no signs of separation from the body or cracking at the connection point whatsoever.

Iâ€™ve also been pleasantly surprised by the paint jobâ€™s durability. Itâ€™s natural to get a little hook rash after a few weeks of use, but I havenâ€™t noticed much on the Rattling Square Bill. Keep in mind, Iâ€™ve also been fishing a ton of riprap lately.

Because shallow water bass can be so spooky, I try to stay as far away from them as I possibly can. For this reason, I like to use very castable lures in the fall of the year. Iâ€™ve been using the Arashi Rattling Square Bill on a fairly stiff rod and have been amazed by how easily it casts.

Upon first glance, I was a bit concerned about its castability because it only measures 2 1/8 inches in length. But itâ€™s actually a fairly heavy lure given its small stature. It weighs 1/2-ounce and allows the rod to load beautifully on the back cast before catapulting it a ridiculous distance.

While the weight of this crankbait does allow for very long casts, it has also made it very easy to make accurate short-range casts to specific pieces of cover. I like to use roll casts when Iâ€™m skipping it under docks and the Rattling Square Bill makes â€˜em very easy. Lighter baits will often cause anglers to â€œpullâ€ their casts to one side, but hasnâ€™t been the case with this lure. You donâ€™t have to mess with your tension knob or your brake settings, eitherâ€”just let it fly. 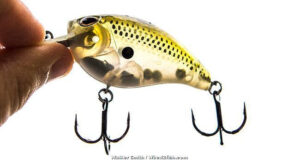 I do the majority of my shallow fishing in dirty water. In low-visibility conditions, bass feel the need to be â€œagainstâ€ something whether itâ€™s a seawall, dock post or even a laydown. In a way, theyâ€™re just like humansâ€”if youâ€™re in a dark room, youâ€™re probably not going to wander around aimlessly in the middle. Youâ€™ll most likely feel for the nearest wall in order to guide your movements.

With that being said, these dirty water bass rely heavily on water displacement and sound to track down and eat forage. It seems as if Storm understands this concept very well because the Arashi Rattling Square Bill is really, really loud. Several creek arms of my home fishery look like tomato soup right now and Iâ€™ve been catching the fool out of â€˜em on this crankbait. Iâ€™m not necessarily using bright colors either, which tells me the single-knocking rattle makes a big difference.

Rotated hook hangers are a simple but excellent idea 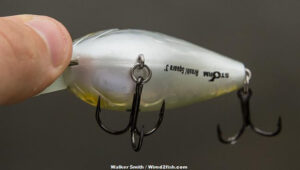 Grab one of your favorite crankbaits or wakebaits and take a close look at the hook hangersâ€”the front hanger is probably parallel to the lureâ€™s back. This doesnâ€™t affect the action in any way, but it can definitely cause your treble hooks to become tangled because it essentially puts them closer together.

The Arashi Rattling Square Bill, however, has rotated hook hangers that keep the treble hooks further away from each other. The stock hooks on this lure are great, but this extra room allows you to use much larger treble hooks if you so desire. If youâ€™d rather stick with the stock hooks, you wonâ€™t have to worry about any tangling, regardless of how aggressively you work the lure.

Iâ€™ve really enjoyed using the Storm Arashi Rattling Square Bill and I definitely think itâ€™s worth a look if youâ€™re a shallow water power fisherman like me. Itâ€™s a no-hassle lure that swims straight and casts easily it takes the annoyance of tangled treble hooks completely out of the equation.

The Storm Arashi Rattling Square Bill is available at TackleWarehouse.com. 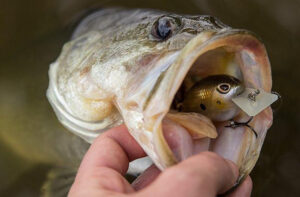