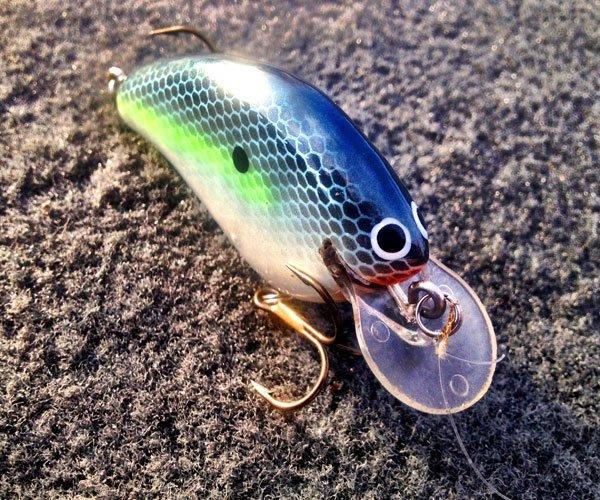 Within the first few casts of a crankbait, many anglers can tell whether or not it’s going to catch fish. You get that “feeling” that only a fellow bass fisherman can understandâ€”it casts well, runs true and, on rare occasions, has that special hunting action that we all crave. It’s been a while since I got this special feeling with a bait, but the minute I got my hands on a Stanford Lures Old School SSR, I was itching to put it to the test. Since my first trip with this crankbait, I have been looking for any excuse imaginable to throw it.

Like every Stanford Lure, the Old School SSR is made from 100-percent natural cedar from the northwestern United States. Why does that matter, you ask? The cedar used by Stanford Lures gives their baits that unmatched hunting action that the Wired2Fish crew always talks about, while also allowing these baits to suspend for longer durations. In the end, you are left with a fish-catching crankbait that lingers in the strike zone longer, producing more bites and bigger bass.

The Old School SSR casts like a dream. Because cedar is much denser than other woods, such as balsa, this crankbait throws just as well as other mass-produced plastic crankbaits. If you’re after bass in thick laydowns or between small dock slips, pinpoint casts are never an issue. While a lot of crankbaits tend to spiral in windy conditions, the Old School SSR flies straight throughout every single cast. Regardless of the conditions or area you’re fishing, this crankbait won’t let you down.

Even more impressive is the unique, natural action of this crankbait. It’s difficult to compare it to another plug, because there aren’t many like it. The Old School SSR has a violent shimmy to it, but also maintains a very subtle presentation in the water. It is rare for such a razor-thin crankbait to possess such a pulsating vibration, as it was fished on multiple rod and line types with the same impressive vibration transmission. When you get out on the water with the Old School SSR, take a minute and swim it back and forth next to your boatâ€”if it wasn’t attached to your line, you’d swear it was a fleeing shad. 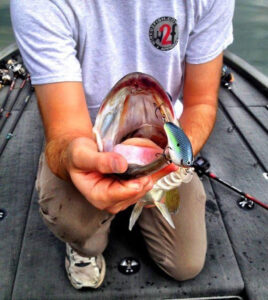 This crankbait doesn’t have any rattles and it doesn’t need any. The absence of noise-making rattles jives perfectly with the naturalistic theme that Stanford Lures strives to achieve with every crankbait. When it gets near a big bass, chances are, you’ll get bit. This also makes it great for the cold water applications in which many loud, plastic crankbaits fail.

Let’s take a minute and talk about this “natural hunting” action that was mentioned earlier. Shad very rarely swim in straight lines. Most of the time when bass encounter shad, the shad are scared out of their little minds and swimming for dear life. They’ll dart left, scoot right and probably even upside-down to escape a hungry bass. Stanford Lures knows this, and they have emulated it perfectly with the Old School SSR. You can see and feel it hunt throughout your retrieve as your line occasionally shoots one way and straightens up again. I can’t say it enoughâ€”only the “special” crankbaits have a true hunting action, and the Old School SSR excels in this category. 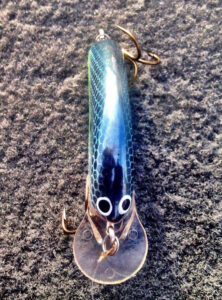 Although it isn’t equipped with a square-shaped bill, I use this crankbait just as I would a squarebill. In fact, it comes through cover very wellâ€”even better than some squarebills. Again, the natural cedar gives the Old School SSR awesome buoyancy that lets it find its way through cover with small, intermittent pauses of your retrieve. I’m not afraid to put these baits into the crud. With that being said, it’s important to understand that cedar baits aren’t made to withstand repeated casts into concrete seawalls, boat ramps and boat docks. If you doubt your casting skills in certain precarious situations, I’d think twice about wailing away with the Old School SSR. Once you experience this crankbait first-hand and catch a few big bass on it, however, it will be a small price to pay.

Depending upon the retailer, the Stanford Lures Old School SSR sells for approximately $20.00, but don’t let that scare you away. It is important to know that every one of these crankbaits are hand-tuned by founder Dieter Stanford and also hand-painted. With other custom crankbaits sometimes selling for more than fifty dollars in places, it’s hard to beat this price point for a handmade crankbait.

This crankbait is the real deal, and one that I plan on throwing for a long time to come. Plainly stated, you need to get your hands on a Stanford Lures Old School SSR. If you’re anything like me, you’ll be hooked after the first cast.

TackleWarehouse.com also has several outstanding Stanford Lures products to browse, so be sure to check them out.