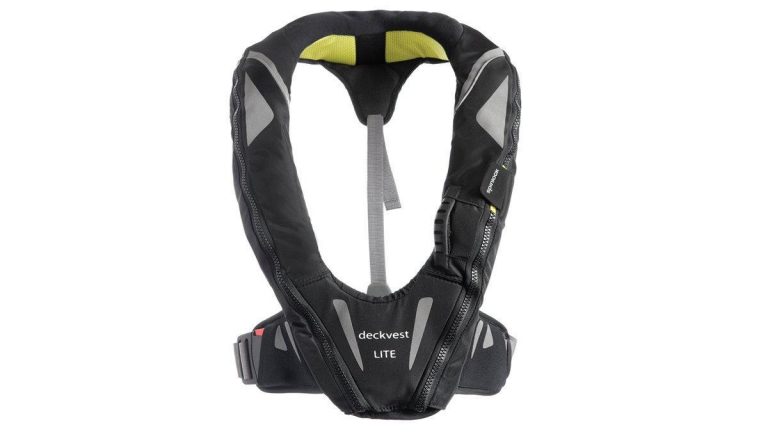 The Spinlock Deckvest Lite is a new PFD to boaters and anglers stateside as this company is out of the UK. They sent me one earlier this year to test and see what I thought about them. So after using it for a few months, I wanted to share what I found on these new PFDs.

What is unique about the Deckvest Lite

Spinlock has a noted history of quality hardward and tie offs used in sailing and developed a unique hoop design rather than a U-design you see a lot among auto-inflate personal floatation vests. It makes putting the vest on pretty easy initially. One side strap wraps around your waist and clicks into the oversized side buckle.

The jacket is rated at 170N (38 pounds of floatation). Most people have no idea what that means. It means it can float 38 pounds of metal, rock or other solid substance. A person is 80 percent water. So in the water 80 percent of a person weighs nothing. A person is also usually 15% or more of fat which floats naturally in water. So a 200-pound person weighs about 5 percent in water what they weigh on dry land. So they would need about 10 pounds of floatation to keep them afloat.

The Spinlock Deckvest Lite is a US Coast Guard approved category 5 floatation vest with type III performance. It features a hoop to attach your kill switch. Upon inflation, there is a whistle on the vest to signal for help. The buckles and straps are large and heavy duty but comfortable. It rests comfortably on your chest and neck but it does take a bit to get used to the fit if youâ€™ve worn other inflatables much.

It comes in 4 colors – black, pink, blue and white.

My experiences with the Deckvest Lite

The jacket went on and off easily while fishing. It adjusts as easily for a proper fit and comes with an optional crotch strap to make sure you have the maximum security of the jacket to your person in severe weather. I removed that strap almost immediately as I did not like the fit with that strap on there. Itâ€™s easily removed and made as an option for smaller young adults or other people not so confident in a boat.

The jacket is light, small and not very bulky at less than 2 pounds. Thatâ€™s a nice feature when itâ€™s warm outside, but it also made it a little cumbersome to wear in heavy winter gear. I liked it a lot when I was fishing in shorts and a t-shirt, but with layers of clothes and a bulky jacket, it was pretty restrictive.

The jacket employs a Halkey Roberts Alpha Auto Inflator which is said to only inflate when water is flowing through it upwards.

I manually deployed the Deckvest Lite and used the opportunity to test that it would float me in the lake. I also found the jacket easy to put back together after deployment and a rearming kit sold separately will make it as good as new.