Prime time frogging is upon us with the grass matting up in the bays and coves and out on the main lake flats all over the country. It’s had all summer to thicken and sprawl across the bays. Making catacombs and networks of underwater tunnels for bass to roam and forage on everything above and below the mats.

Froggin’ for bass generates some excitement with anglers and bass alike, and it’s a big fish technique too. Luckily a good frog really isn’t hard to find anymore. There is such a large market of hollow-bodied frogs now, and it seems like just about every color shape and size is available. One style of hollow bodied frogs we really like are the popping frogs. There are several on the market but a new one from Snag Proof caught our eye at ICAST.

The Snag Proof Ish’s Poppin’ Phattie weighs 5/8 ounce but casts like a much heavier frog. It’s 2 3/4-inches long and comes in 6 colors. The legs are already trimmed.  The plastic is pretty dense. Anglers, however, will notice right out of the package the unique nose with a cupped mouth on either side of the nose. The design is not just different but necessary for walking smoothly over mats.

With a bit of a pointed nose rather than a full cupped mouth, the frog comes through grass and other cover extremely well, but not surprisingly, it still picks up and pushes a lot of water on a sharp downward snap. The other nice attribute to the frog is the built in rattle. It gives the frog some added noise. The frog releases water very well on its own which saves an angler time squeezing water out between casts. It also cuts very well back and forth, making it easy to walk in open water.

The frog sits pretty level in the water but it grabs water well and pushes it forward well. I like this design because I felt like I could work it like a pointed nose frog, a poppin frog or a walking frog depending on the mood of the bass. 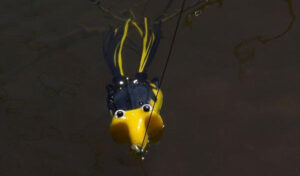 The plastic is harder than a lot of frogs, which thus far hasn’t been an issue on hookups and has helped the frog hold up to several vicious bass blow-ups.  We tested the frog recently a few times on some matted grass and around some wood cover. The bait crawls over cover well and drew several vicious strikes on the mats, landing several bass in the process.

We tested the Cali color which is made to mimic the black and yellow birds famous on fisheries like the California Delta. The bass in the Midwest seem to like it equally well. We tested the frog on a Medium-Heavy 6-foot rod and 7.1:1 Abu Garcia Revo SX Gen 3 reel and 50-pound Spiderwire Ultrabraid.

The frog bite should get better in the next few weeks, but we’ve already managed a few bass on the frog. We had some huge blow ups on it that just missed the frog entirely, then we’ve had some small non-keeper blowups that got hooked perfectly so it’s hard to say yet how it compares to other frogs for hook up ratio. So far we’re pleased with the results of this frog. It’s drawing strikes, hooking bass, and getting them in the boat. It casts as good as any frog we’ve ever thrown. It walks, chugs, spits, slides over cover and more â€“ all in one frog.

The frog retails for $8.99 which puts it in line between the cheapest frogs and the most expensive frogs as a good middle of the price range frog. I’d like to see a few more belly colors than black or white. I’d like to see a yellow and a green option as they introduce more colors but for now, we’d have no problem recommending this frog based on our initial testing. Check out tacklewarehouse.com to see more colors and pick up a few before prime time frogging hits your local lake.