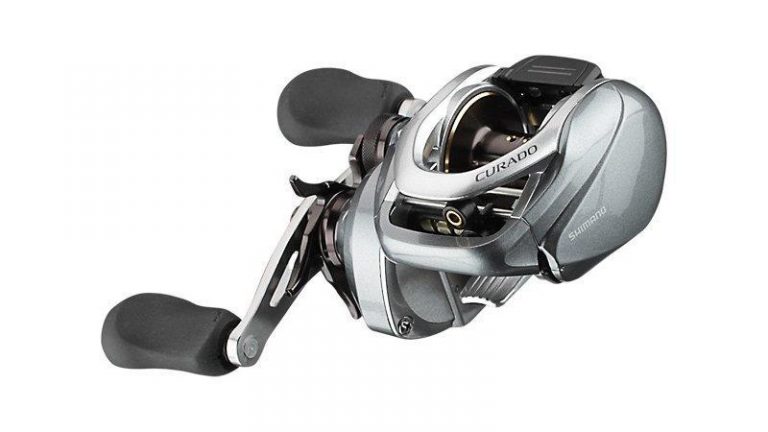 Certain fishing reels leave a mark on the the annals of fishing tackle. Their popularity seems to transcend the recreation fishing industry. And they come to be known by little monikers. Shimano hit it big when they created the first series of Curado reels in 1991. Or as they came to be known in 1994, “the green reels.” Those green reels were staples among many serious anglers.

Fast forward to 2014, and they are now on the “I” series of the line. I bought one of the Shimano Curado I Series reels as it was the entry fee to fish a Shimano tournament on Kentucky Lake this past spring. I picked up the Curado 200 IHG from my local retailer Fast Eddies and took it to the water during practice. Here are a few of the adjectives I would use to describe this reel:

I was never a fan of the Curado D or E reels. But I came away very impressed the Curado I series. From the get go, I could tell toughness and durability of the reel were a focal point as well as smoothness and castability. I like that they went against the trend of trying to make reels ridiculously light, even if that means sacrificing strength and performance. I’m never a fan of cosmetic appeal if it takes away from performance.

So I like that they incorporated a lot of their strength technologies like X-Ship and S3D that give their frames, gears and spool rigidity and stableness while you’re casting, setting the hook and fighting big fish. The side plates are composite material. So while it won’t withstand a drop on the concrete, not that many reels would, it has a strong frame but doesn’t feel like a brick in your hand. I feel a good mix of power and comfort when I fish with it.

I feel like the smoothness and castability make this reel. The reel only has 5 ball bearings. But they are the S A-RB bearings. So they are extra smooth and feature shields that keep grit and grime out of them. In fact, I’d say it’s one of the smoothest 5-bearing reels I’ve fished. The reel casts extremely well thanks to the new Stable Spool Design (S3D). I was very impressed how well it cast 1/4-ounce Texas rigs and weightless Senkos.

The reel is very comfortable in your hand fishing all day. I bought the 200 size reel and it wasn’t overly large. It still fit nicely in my hand and was low profile enough to be comfortable all day fishing with it both pitching around shallow cover and making long casts offshore.

It comes in 5.5:1, 6.3:1 and 7.2:1 gear ratios in both left and right hand models. But I thought the drag at 11-pounds was strong and the brakes were nicely adjusted to get your casts dialed in nicely regardless of the conditions.

Shimano developed a really nice access port to the spool, one of the best I’ve seen. You flip a switch on the bottom of the frame and the side springs open and the swings away on a hinge. From there you can remove the spool, add lubricant and inspect the centrifugal brakes. It was easy to access quickly while on the water and get back to fishing. One caution is if you crank down the tension knob too much it will make closing the side plate difficult.

The brakes are easily dialed in through a unique dial built into the edge of the frame and side plate. The dial is stiff but turns easy, so it’s easy to set and dial it in really fine to match it perfectly to the weight of your lure.

Overall this is a good reel for the money. It fished really well on the Cumara 7-foot, 2-inch Jig Worm rod I won in that same Shimano tournament (we finished 10th for those keeping score). Click here to see more Shimano reels. 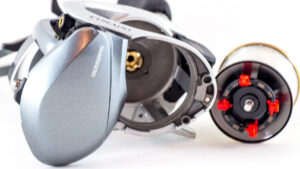