One of the cooler crawfish trailers I’ve seen in a bit has to be the Lau Lures Chief Craw. Lau Lures is famous for it’s Death Shimmer spinnerbaits but this craw might even be a cooler design. The Chief Craw features two legs that really do float putting the pinchers in the defense position whenever you stop the jig.

It looks very sexy in the water on the back of a rubber-skirted jig. As the jig opens up, the pinchers rise up slowly into the fighting position. It looks like a craw on guard. A very natural presentation for sure.

The Chief Craw has a patented hub design that allows the angler to slide a hub of plastic up the shank so that the arms will float up and outward on the back of a jig or spinnerbait.

Then to sweeten the deal, they added a pocket in each claw for round rattles or scent sponges to be added. I’ve been adding rattles to the Chief Craw, and love the sound it makes in the water.

I’ve also put it on the back of a spinnerbait and been catching some nice bass at night on it. The arms flap with the blade pulsing, and the rattles go crazy. I always put a spot of super glue in the pocket to secure the rattles in place.

I was afraid the pinchers would pull off too easily with the design, but that hasn’t been the case. In fact, I’ve had other brands of trailers lose one arm a lot more frequently than these. 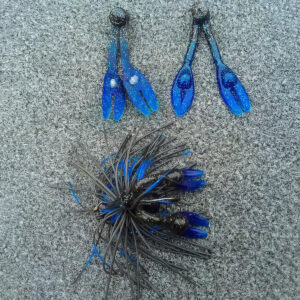 The availability on them has been a little scarce as word is just now getting out about them, but I figure there will be more places to buy them soon. You can contact the designer Rich Lau on Facebook to order, and they are available through a few retailers already. Here’s a short video of the lure in action underwater: