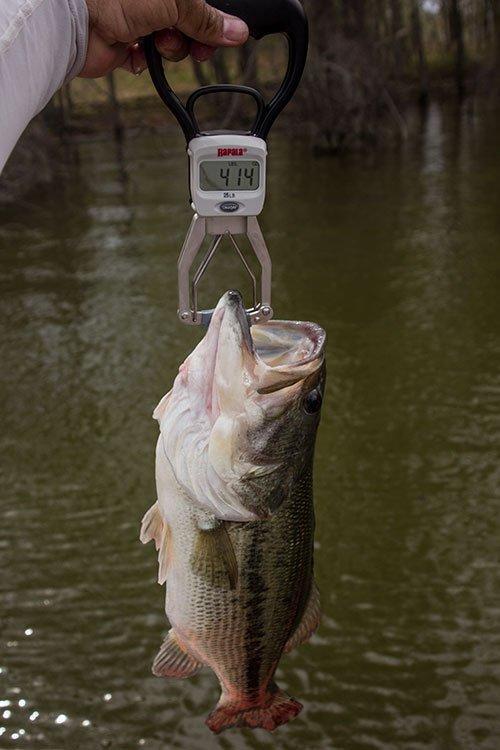 If you fish a bunch, you’re bound to catch fish worth weighing. Whether it’s tournament competition or just fun fishing and catching big fish you just want to be able to tell your buddies that you  caught, a good, easy to operate fish scale is worth its weight in … well fish.

The Rapala Lock ‘n Grip 25-pound Digital Scale improved on several different designs and put them all into one scale. But several features stood out as this being one of the best scales on the market in my opinion including:

A quick check takes the lies out of fishing

I often weigh fish just to get real accurate measurement of the fish I’m on or patterning at a certain time. It helps me be a lot more accurate on my guesses when I’m just out fun fishing. It also reduces tall tales to credible catches. Dad always called them “De-Liars” because it turned braggers into honest anglers. Because the scale operates so quickly, you can catch a fish, turn it on, grab the fish by the jaw with the claws and the weight of the fish holds it firmly in place. Then when you’re done you just lower the fish to the water and pull the handle and they are released quickly and easily. 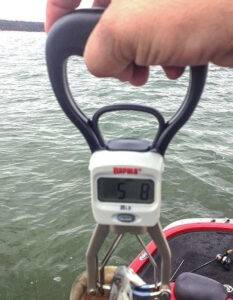 Accurate to the ounce

I prefer a scale that weighs in pounds and ounces to be really accurate, especially when fishing tournaments. I’ve won some tournaments by a few ounces and I’ve lost by one ounce more than once. So that will make you invest in a good scale. I like how steady this scale is too. It contributes to getting an accurate reading. I feel like with those scales that have a dangling hook that sways, you might not get the most accurate reading in waves and boat motion

I hung a big smallmouth, 5 pounds, 8 ounces to be exact, on the scale in 4 footers and got a consisten 5-8 reading up and down the waves.

Better for the fish

I’ve never been a fan of poking a hole through the lip or running something up into the gills of a bass to weigh it. I like that the cam action jaws snug down on the fish without hurting it and you can quickly weigh a big bass and release it. Rapala Lock’n Grip Scale comes with these rubber pads you can put over the jaws to give the bass some padding as you weigh them.

It takes a time or two to get good and latching a bass onto the jaws so please be careful when hooking them the first time. You don’t want to drop a 5-pound bass from 4 feet onto your boat floor. But after a couple of times, you’ll be quickly catching, weighing and releasing big fish with minimal effort and time.

This scale is not widely available. I’ve seen them in a few tackle shops but I got mine direct from Rapala.com. It costs a little more than many of the scales but I want to get one good scale and be done with it, and with the Rapala Lock ‘n Grip 25-Pound Digital Scale, I’ve done that. I hear so many stories of guys who caught the fish of a lifetime and didn’t have a scale. That would drive me nuts and probably drove them nuts as well. So do yourself a favor and pick up a good, easy-to-use scale. 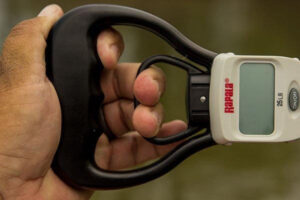