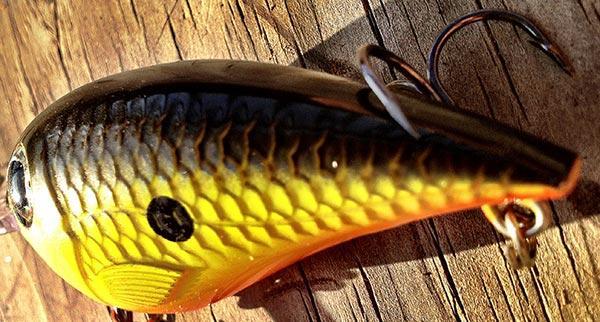 For a young man, I have fished in many places over my short 24 years on this earth. Whether I’m bass fishing in my home state of Georgia, catching salmon in the wilderness of Alaska or offshore fishing in the Gulf of Mexico, I’ve noticed somethingâ€”everyone is familiar with Rapala. I, like many other anglers, caught some of my first bass as a child on a Rapala Original Floating Minnow.

When I had the opportunity to test-drive a Rapala Crankin’ Rap, I was pumped up about it. Having caught hundreds of bass on Rapala’s famous balsa wood crankbaits over the years, I was looking forward to trying out an addition to their line of durable plastic baits.

As I first removed the Crankin’ Rap from its package, I immediately noticed a pretty cool featureâ€”I could feel the bait’s scale patterns between my fingertips. Growing up on the clear waters of Lake Sidney Lanier, realistic baits have always been a huge deal to me. I’ve got a lot of crankbaits that have a very dull, matte appearance to them and I hardly ever throw them. Fish are wary by nature, and I’ve gotten to the point where, if it’s not realistic-looking, I don’t even bother with it. Between the etched scale patterns and the holographic inserts within the big eyes of the Crankin’ Rap, it’s about as realistic as it gets.

It may sound a little crazy, but when I test new crankbaits, I really abuse them. What’s the point in throwing a crankbait that will crack if it hits a rock the wrong way? I took the Crankin’ Rap out to my driveway and dropped it onto the concreteâ€”not even a scratch. Then, I proceeded to throw it onto the concreteâ€”nothing. When I got on the water, I fired it at a seawallâ€”just a small scratchâ€”no cracks, no separation between the bill and the body of the bait. I was pretty impressed.

Just under 4-inches long from bill-to-tail, the Crankin’ Rap has a fairly small profile for a 10-foot diving crankbait. Needless to say, I was taken aback when it sailed through the air like a rocket. I really liked the fact that, even though it was a windy day, the Crankin’ Rap didn’t spiral or helicopter during any of my testingâ€”its streamline design allows it to fly straight with minimal wind resistance.  I do, however, prefer oval line ties over the Crankin’ Rap’s circular line ties. In high-pressure situations when you need to efficiently change baits and quickly get back to fishing, I believe that oval line ties make re-tying much easier. Replacing line ties takes about ten seconds, so I don’t see it as being much of an issue.

The Crankin’ Rap’s rattles are unique, which in my opinion, is what makes a crankbait special. The lower pitch of the rattles doesn’t sound like most rattling crankbaits on the market, which can prove invaluable when targeting pressured fish. Whenever you can present them with something that they haven’t seen or heard before, you have a big advantage over other anglers.

Many crankbaits that dive deeper than 8-feet have the tendency to wear you out on a long fishing day, but I the Crankin’ Rap’s profile allowed me to fish without fatigue. It gets down to the desired depth quickly and cuts through the water with ease. For optimum results, I recommend throwing the Crankin’ Rap on a medium-heavy action rod with a fast, sensitive tip.

I fished it over, and through, a lot of big brush piles and stump-covered points without encountering the first hang-up. The high buoyancy of the Crankin’ Rap allows the angler to fish in some really nasty stuff. When you feel the Crankin’ Rap hit a piece of structure, a quick pause allows the bait to float right over the structure while simultaneously creating some vicious reaction strikes. 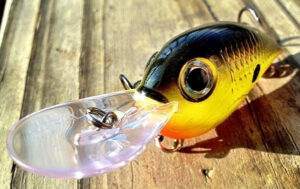 Although I didn’t immediately notice, about halfway through my testing, I realized that each Crankin’ Rap’s running depth is printed on its bill. While it’s a small feature, I found that very practical. If you’re anything like me, you probably have an enormous, mangled mess of crankbaits in your tackle trays. When you’re graphing fish at a certain depth, you feverishly dig through your crankbaits and can’t remember how deep they all run. Problem solvedâ€”with Rapala producing Crankin’ Raps that cover 2- to 14-feet, you’ll always know exactly how deep your lure gets.

Fall is crankbait time, so if you’re looking to upgrade some of your old crankbaits, we suggest picking up a few Rapala Crankin’ Raps. Reasonably priced at $5.79 per lure, the Crankin’ Rap is a great little crankbait at an even better price. 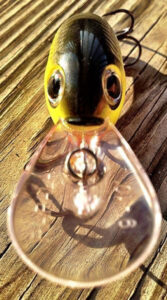