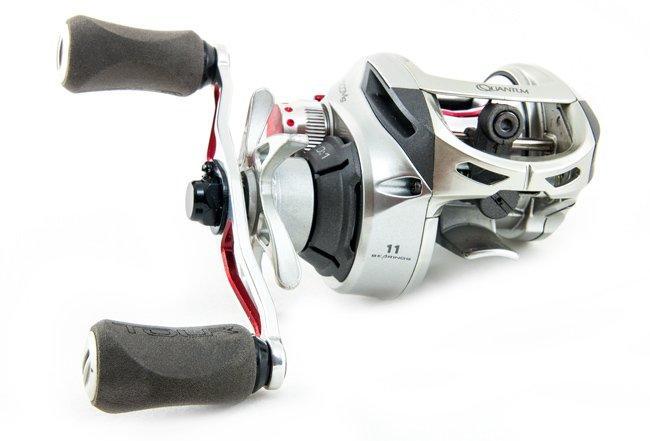 Flagship bass fishing products test the boundaries of materials, craftsmanship and in the case of fishing reels, weight, all in an effort to improve performance. This summer Quantum released their new flagship baitcasting reel, the Quantum Tour Mg 100. Quantum engineers gave me one back in April to test, and I’ve been using it for several months now.

Quantum boasts the following features on this reel:

These four aspects stood out to me on this reel:

Comfortable on a combo

There as been a real push by manufacturers to get the weigh out of rods and reels in the last decade, and this reel is one of the lightest and also the first magnesium reel Quantum has produced. Making a reel out of magnesium frame makes them significantly lighter and equally as strong as competing materials. The tradeoff is in the price of the materials.

Quantum also used EVA knobs on the handle and aluminum gear and drive shafts to further reduce the weight while maintaining smoothness in performance. The reel is very low profile and palms well in your hand making it very comfortable to fish all day on a combo.

The flipping switch some will love

I’m not a fan of flipping switches, but I have several fishing buddies who love that option and miss it on the old Quantum reels. They will love having that feature back on Quantum’s flagship reel. An angler can flip the switch, and now when they depress the thumb bar, line is only released while the bar is pressed down. As soon as you take your thumb off, the spool engages again ready to set the hook quick and start reeling in a fish. 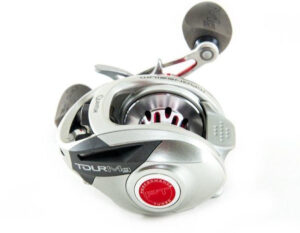 Most of the magnesium-frame reels you see on the market cost more than $300. But the Quantum Tour Mg comes in under $280. That’s better in comparison than most of what is out there currently. I’ve always said innovation is not making the most expensive product you can make, but in figuring out how to improve manufacturing and materials to reduce cost to the consumer. That’s where companies ultimately win with anglers.

I paired the Quantum Mg with a 6-foot, 8-inch Quantum Smoke rod for testing. Even with a shorter than usual rod for me, I could launch baits under 1/2 ounce a good distance. I did need to control the line with my thumb on those bombing casts. There is a 6-step ACS cast control under the opposite side plate as well as a clickable tension knob to get very precise tension on the spool for casting.

But I still found the reel was definitely better with thumb control. This isn’t one of those reels where you set it and just let it fly. But if you’re like me, I like to back off the tension and let a bait fly with my thumb as the line tether to get maximum distance and this reel seemed to provide that.

The drag was smooth, adjustment was easy and the weight was phenomenal on that combo. So far it has held up well bumping up and down the lake and firing skips under docks or launching topwaters and spinnerbaits across big shallow flats.

You can find the reels here at tacklewarehouse.com or at other retailers who also carry Quantum reels.