Fishing reels on tacklewarehouse.com range in price from the really affordable at $19 up to the moderately absurd at $649. I’ve had cheaply priced reels that were dogs, and I’ve had some very expensive reels that were also Alpo eaters. So I never write off a reel at either end of the spectrum. Some reels that have big price tags are the best reels in my collection bar none. But I also still fish with quite a few reels under $50. One of those reels is a Pflueger Trion.

I’ve fished with the Trion reels since they were first released in the 1990s. The recent edition has a lot of cosmetic improvements but the function of the reel has stayed fairly consistent adding a few engineering improvements. The main thing is the reels low price has stayed the same.

Here’s what I think other anglers will find of interest about this reel:

It feels solid in your hand. The 20 size weighs 5.9 ounces and the 30 size weighs 8.6 ounces. Both size reels fish smoothly out of the box. The drag adjusts easily on the fly or during a fight with its top of the spool design. The bail clicks open and closes easily on the cast. Line comes off the reel well thanks to a beveled edge.

Tip: Don’t overfill your spool. Only fill the reel until there is still about a 1/16 of an inch showing on the top edge of the spool. On spools with a beveled edge, filling to close to the smaller top edge will cause line to slip off and tangle on casts.

I’ve thrown big lures on the larger TI30X reels and itty bitty 1/32-ounce crappie jigs on the TI20X reels. It’s nice to have reels that can handle a multitude of uses. I might throw a little bitty Rapala Shad Rap on my spinning reel one week, then fish a jerkbait on the next week and then throw a floating worm on it the following week and a drop shot after that.

I like having reels that operate smoothly because if the reel is putting more drag on your retrieve than you are used to, it can really play with your sensitivity and how well you decipher bites.

I would say these reels have a little more tightness to their retrieve than some of my higher end fishing reels. So keep that in mind as you start to familiarize yourself with how they fish. But they retreive lures smoothly and cast extremely well. For the price, they are extremely hard to beat.

Not just your bass reel

I have bought 5 of these reels now for several crappie and panfish rods. I will use them some for bass as well. But I like having several of the same reels, especially when I’m using a lot of small tackle. It helps me keep the same feel for the baits as I switch from rod to rod. A lot of the bites I detect while fishing are pressure bites where the weight of the lure changes. If a reel puts too much pressure on your hand you miss that sensation you need.

With 4-pound line and ultralight jigs, the reels have worked really well. I have a lot of confidence fishing with these reels and the bites have transmitted well to my hands through the line and this reel.

The best part is you can pick up the small 20 size reels for $30 on tacklewarehouse.com. And the larger sizes for $40. So if you are looking for a handful of spinning reels at a good price, you’d be hard pressed to find better ones at this price point.

You can take a look at the reels online at tacklewarehouse.com and of course buy them there as well as most other retailers that carry Pflueger reels. 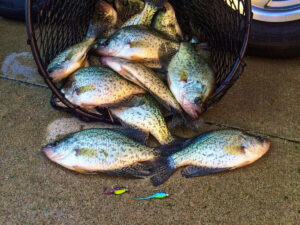 Every crappie in this picture was taken with a couple jigs, a Trion reel and a light-action spinning rod.