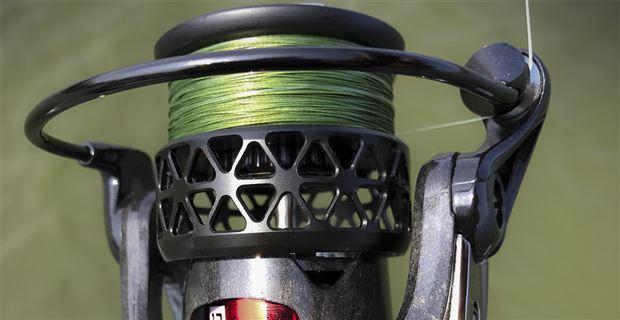 For some reason, a good spinning reel is harder to design than a good baitcasting reel especially when you are making your first foray into spinning reels as a company like 13 Fishing has done with their One3 line of Creed Spinning Reels. The first reel I reviewed from One3 is the Creed GT.

The Creed GT looks different out of the box. It features a whiffle-ported spool and whiffle-ported handle joint to greatly reduce weight without reducing strength by using an Air Foil Carbon construction. The bail wire is larger than you see on most spinning reels which helps with its line management and hopefully durability. And, the red accents and attention to aesthetics gives this reel a high-end look at an $89 price point. 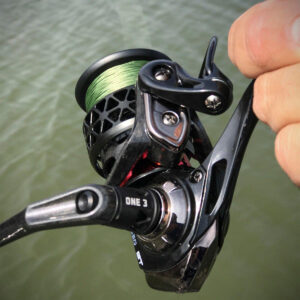 The drag on the reel was very smooth out of the box on the 2000 model I tested. With 10 ball bearings, the reel is smooth on the retrieve. I read reviews on various sites and a few people mentioned feeling the gears. I didn’t feel that at all on my reel. I thought the reel was smooth at both slow and high speed retrieves.

I fished the reel the first few weeks with some very light lures — 1/8 ounce shaky heads and recently the DUO Realis Shinmushi bug topwater lure that weighs 1/5 ounce and is not an easy lure to cast in the wind because of its design. The reel lays line very evenly and as a result it casts very smoothly. I was able to make long casts and fish the lure back with no resistance from the reel handle or rotor. That’s imperative  for fishing small lures. 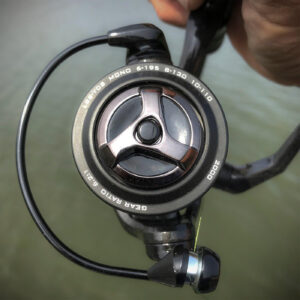 I paired the Creed GT reel with a 13 Fishing Fate 6-foot, 10-inch medium light rod. I have since landed several bass to 4-pounds and even let my brother-in-law who doesn’t fish much, fish with it a bunch this past week to see how he liked it. He wanted me to leave the combo for him. I like affordable fishing tackle that works well for advanced and novice anglers alike.

For their first foray into spinning reels, I was very impressed with the One3 line of Creed reels from 13 Fishing. It’s tough to get the drag, rotor, smoothness and lightness right in a spinning reel when you don’t have a rich history of making those types of reels. 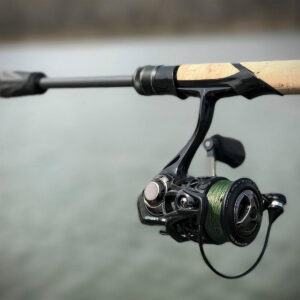 I like that the guys at 13 Fishing do in fact have a rich history in making reels for other companies but that they are constantly looking for a better way to do things with new technologies that is not the same way everything is made in the industry while also trying very hard to bring price points way down. There are several good companies doing that in the reel market and that has brought 13 Fishing into the discussion with these rich-history, powerhouse reel makers.

The Creed GT feels like a high-end reel at a very reasonable price point. Smooth rotor, smooth drag, strong frame and bail wire, 10 ball bearings and cool aesthetics show off what they can do with new technology that is affordable for the average angler.

I think as they progress, their reels will build a rich storied history like the other more established brands. For now, I’m very pleased with the One3 Creed GT and would recommend it to anyone looking for a new spinning reel under $100. You can find the Creed GT at Tacklewarehouse.com and retailers carrying 13 Fishing products now. Check out more on the Creed GT at 13Fishing.com. 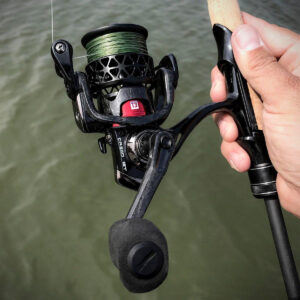