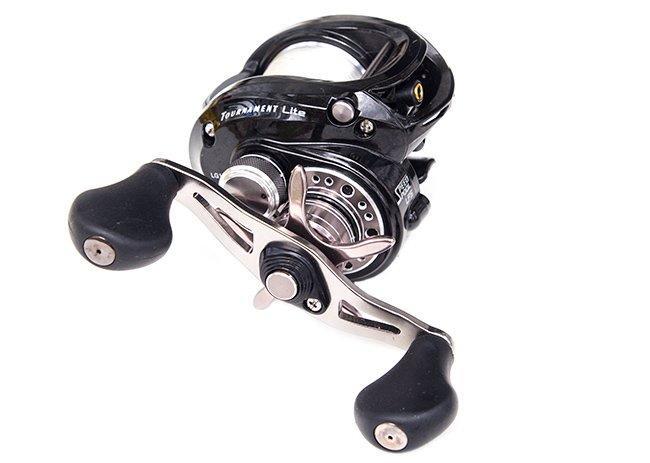 It doesnâ€™t really matter whether Iâ€™m fishing in stained or clear waterâ€” I make a concerted effort to make the longest casts I possibly can. Like most of you, I grew up fishing from the bank and it taught something that has stuck with me to this day. Even the slightest shadow or vibration from my footsteps would spook big bass and make them nearly uncatchable. Fast-forward a few decades and add some trolling motor and transducer noise into the mix and stealth remains a big part of my bass fishing strategy.

Iâ€™ve been using the Lewâ€™s Tournament Lite Speed Spool Casting Reel for several months and its insane castability has allowed me to keep my distance from shallow fish and catch some great bass.

There are four things that have really impressed me about this reel.

Iâ€™m a big believer in matching the hatch which becomes pretty difficult in my area this time of year. A large majority of my fisheryâ€™s threadfin shad are very small right now, making it necessary to utilize smaller-than-average baits in order to get bites.

“What kind of reel is that? I’ve never seen someone flick their wrist like that and make such a long cast. That’s incredible, son.”

While Iâ€™ve previously used spinning reels for some of these dainty presentations, the castability of the Lewâ€™s Tournament Lite Speed Spool Casting Reel has opened up several new possibilities for me. Whether Iâ€™m casting a tiny balsa crankbait, a small, weightless soft jerkbait or a 1/4-ounce buzzbait, this reel has made it ridiculously easy.

This reel doesnâ€™t require me to constantly babysit the spool with my thumb throughout the cast which has perhaps been its most impressive quality. I always try to use the wind to my advantage and Iâ€™ve been able to bomb some very small lures without any backlashes, loops or frustration.

When I use the Tournament Lite with â€œnormal-sizedâ€ lures such as squarebills and jerkbaits, the results are extraordinaryâ€” thatâ€™s the only way I can really describe it. Instead of having to make a big overhead cast when Iâ€™m covering large, expansive flats, Iâ€™ve been able to make a quick roll cast without sacrificing any distance whatsoever.

Last weekend while I was out fun-fishing on my home lake, I noticed an old man in an ancient bass boat slowly approaching my boat. I was casting a wakebait with my Tournament Lite to some random schoolers that had shown themselves and this guy kept coming closer and closer.

â€œWhat in the world are you using?â€ he asked.

â€œNo, what kind of reel is that?â€ he said. â€œIâ€™ve never seen someone flick their wrist like that and make such a long cast. Thatâ€™s incredible, son.â€

Make no mistake about itâ€” Iâ€™m not some sort of great caster. Iâ€™m just as amazed as that old man, to be honest. This reel has added a crazy amount of distance to my casts, regardless of my lure selection. 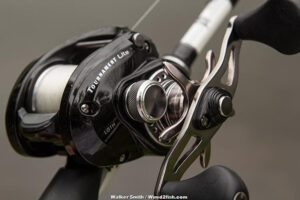 Throughout my testing, Iâ€™ve really enjoyed how easy it is to adjust and fine-tune the Tournament Lite. I get to take a lot of beginner anglers fishing on the weekends and Iâ€™ve started entrusting them with this reel because of its simplicity.

It features a 27-position centrifugal braking system thatâ€™s easily adjusted by an external dial located on the left side plate of the reel. So if youâ€™re not totally comfortable using a casting reel with lightweight lures in heavy wind, youâ€™ll find it extremely helpful.

In addition to the braking system, youâ€™ll also find a tension knob next to the reel handle that clicks each time itâ€™s turned. This clicking may not seem like a big deal, but it helps me be a bit more precise when it comes to small adjustments. Many reelsâ€™ tension knobs force you to â€œguessâ€ the extent of your adjustments, but the Tournament Lite lets you know exactly how far youâ€™ve turned the knob and how many clicks you need to return it to your preferred settings. 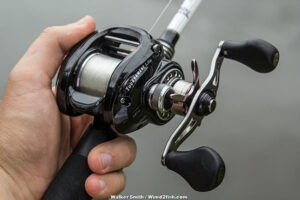 The Lewâ€™s Tournament Lite Speed Spool Casting Reel weighs just 5.8 ounces which, when you put one in your hand, is incredibly light and comfortable to use. When using it for high-fatigue techniques such as walking topwaters and hard jerkbaits, Iâ€™ve noticed less hand cramping at the end of a long fishing weekend along with added comfort.

Itâ€™s hard to explain, but some reels just donâ€™t feel â€œrightâ€ in your hand. Theyâ€™ll get the job done, but when your rod and reel is under a load, the two components rarely feel like one, cohesive unit. Iâ€™m happy to say, however blunt it may be, that the Tournament Lite feels sexy in your hand. Even if you donâ€™t have particularly big hands, youâ€™ll be able to palm the reel easily which will give you more control over both your fish fights and presentations. 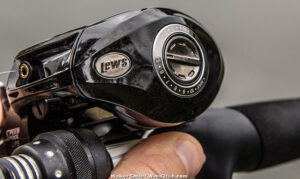 With the recent explosion of low-profile casting reels that have hit the market, youâ€™re bound to run across a few thatâ€™ll make you raise an eyebrow. I try every new reel I can get my hands on and only a select few have felt as sturdy and well-built as the Tournament Lite.

Throughout my thousands of retrieves with this reel, I havenâ€™t noticed any squeaking, jiggling or scratching sounds to speak of. I did, however, have a day where this reel squealed each time Iâ€™d make a cast, but upon close inspection at the end of the day, a few carpet fibers from my boat carpet had made their way inside the reel. After I removed them, the reel performed silently and excellently and has ever since.

When I fight fish with this reel, Iâ€™m always impressed by how quiet and strong it is. Although Lewâ€™s took a lot of steps to reduce its weight, it seems as if they didnâ€™t compromise the its strength or structural integrity. Iâ€™ve beat this reel to death in the past several months and, like my older Lewâ€™s reels, it works as well as the day I first used it.

If youâ€™re in the market for a new casting reel, I absolutely suggest checking out the Lewâ€™s Tournament Lite Speed Spool Casting Reel. Itâ€™s priced at $179.99, but to be totally honest, I wouldnâ€™t have a problem paying over $200 for it. I really like this reel.