The Lew’s team constantly works on improving reel designs and taking what was already good and making it better. I recently received one of the Lew’s Team Lite Speed Spool baitcasting reels from them to review. They generally come across as pretty humble guys, but they were pretty proud of this reel and really wanted me to fish it hard to get my feedback on it.

I’ve had one now about 2 months and can say it’s a fine piece of machinery to say the least for a multitude of reasons. Here are some of the aspects of this baitcasting fishing reel I found interesting and noteworthy:

I’ve said it before, but reducing the weight in a fishing reel does not always yield a superior product. A lot of times too many corners are cut and you end up with a reel that is lighter but doesn’t function as well as a heavier reel. So what does an angler gain from that?

It’s obvious that Lew’s wanted a lighter reel but didn’t want to sacrifice the credibility they’ve established for building smooth reels, durable reels. So they created a smaller profile frame, machined parts out of Duraluminum and C45 Carbon steel as well as framing the reel in Aluminum to reduce the weight while still having rigid high performance parts inside.

The result is a beautiful looking reel that weighs a mere 5.6 ounces but functions like a reel with solid parts inside. It’s not plastic feeling in your hand like other comparable light reels. It feels sturdy and fishes that way too. 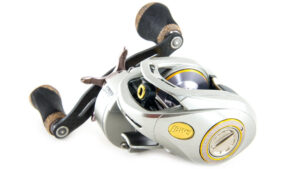 A big push in their new reel designs for 2015 involved producing reels that were lower profile, lighter materials, with different gear ratios in a solid frames that would withstand the abuse fishermen can dish out on a reel whether it be fishing or just transporting a rod and reel in a variety of fashions.

The Lew’s Team Lite Speed Spool sits very low to the rod which makes it so small and palmable in your hand. I love that about the reels. I like that they are light, but I like even more that they are small and comfortable to fish with all day. I’ve fished them a lot on their new Lew’s Custom Speed Sticks and they make for extremely light combos for long days of chunking and winding bass fishing lures.

Middle of the road ratios

Gear ratios in bass fishing baitcasters vary from 5.1:1 all the way up to 9:1. Lew’s added 7.5:1 and 6.8:1 ratios into the mix with this new line of lighter, faster and stronger reels. I like the 6.8:1 for winding baits I want to fish near the bottom, say like a shallow crankbait, lipless crankbait or a spinnerbait. I like the 7.5:1 for fishing baits I need to take up slack quickly with like topwaters, Texas-rigged plastics, jigs and jerkbaits.

The handles are adequately sized and I liked the EVA foam paddles a lot. It was comfortable burning the reel on a retrieve or just slowly taking up slack between lifts and drops of a jig. I think a lot of folks will like having these new gear ratios in between a lot of the other ratios they already own.

Reels with cutting-edge features generally come at a premium in price. While $239 is not cheap, it also is pretty impressive comparatively speaking, when you start looking at the other reels on the market under 6 ounces. Aluminum frame, 11 double-shielded premium stainless steel bearings, C45 Carbon Steel side plates, 27 point adjustment braking system, drilled u-shape spool, 3 models (2 rights and a left), 14-pound carbon composite drag and more for well under $250 is saying something with the way reel prices have gone in recent years.

I’ve talked to several pros who are switching all their reels to these reels for the next tournament season. The few I’ve fished in a variety of techniques make me see now why the pros have been so quick to change.

You can find out more about the reels and pick one up for yourself or a sweet Christmas present at tacklewarehouse.com or at retailers that carry Lew’s fishing reels and rods now. 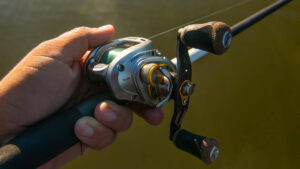