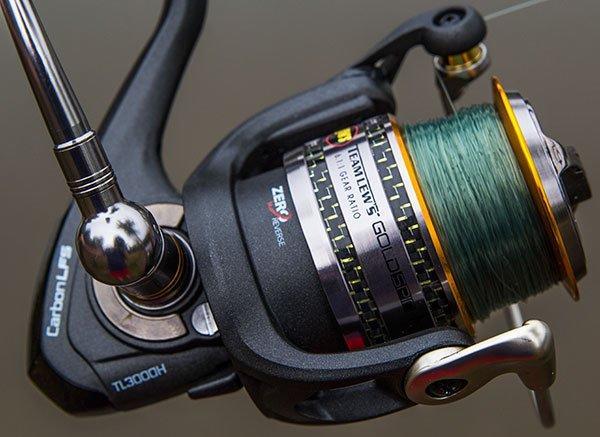 As I’ve mentioned lately, the fishing on my home lake has been strange to say the least. Instead of power fishing with hard reaction baits, I’ve really had to downsize and dramatically slow my presentation. The bad part? I love fall power fishing. The silver lining? I’ve had a chance to test out some sweet finesse gear.

I’ve been using the Lew’s Team Gold Carbon Spinning Reel a lot lately and I’m totally impressed by it. Regardless of the technique for which I’ve used it, it’s been nothing short of impressive.

The number one gripe I hear from anglers regarding spinning gear is line twist. We all have a few of those old spinning reels that will turn brand new line into a slinky before lunchtime.

I’ve been extremely pleased with the Lew’s Team Gold Carbon Spinning Reel‘s line management. It has a very wide spool and an oversized titanium line roller that promotes flawless line flow upon casting. It doesn’t matter if you’re skip-casting a soft jerkbait under overhangs or throwing a Shad Rap into the windâ€”your line isn’t going to jump off of the spool.

All types of line work well with this reel. I’ve used it a lot with 20-pound braided main line and haven’t had a single issue with it. The braid rests flat on the spool and doesn’t sneak underneath the bail. I’ve also been impressed by its ability to handle 8-pound fluorocarbon line. Fluoro loves to irritate anglers, but it’s been no different than fishing with monofilament.

I’m abnormally picky about a spinning reel’s drag system. Nothing will make you lose a big bass faster than a sloppy, surging drag that sporadically engages.

When adjusting the drag on the Lew’s Team Gold Carbon Spinning Reel, you’ll notice extremely small increments between each clickâ€”this was my first sign that Lew’s had the right idea once again.

Upon catching a solid bass, the drag is silky smooth. It doesn’t surge or deliver line in spurts, so you don’t have to worry about inadvertently jerking the hook out of the fish when it dives for deeper water. 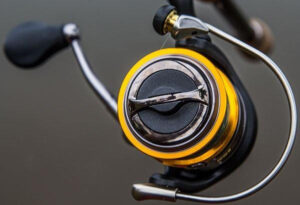 If you like a “firmer” hookset for deeper finesse applications, it’s no problem adjusting this drag system on-the-fly. With very little resistance, you can make exact adjustments in order to adapt to each specific fish fight. 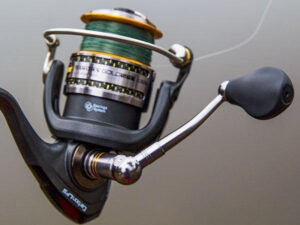 Sometimes the smallest things about fishing gear excite meâ€”this is one of those times. The Lew’s Team Gold Carbon Spinning Reel has an oversized paddle handle that comes in handy in more scenarios than you’d think.

If you’re a tournament angler, you’ve probably had to deal with what seems like gallons of morning dew all over the rods on your front deck. I had the same problem two weeks ago and was totally impressed by this reel’s handle. Even in wet conditions, it’s easy to grab ahold of and helped me maintain control of my first few fish of the morning.

The oversized handle also helps novice anglers “find” the handle when fishing. I see it all the time guidingâ€”if someone’s not comfortable with finesse gear, I’ll see them in my peripheral vision fumbling around, looking for the handle when both setting the hook and retrieving slack. This reel handle dramatically reduces that problem and will make you a bit more comfortable with light line tactics.

When I was a poor collegiate angler, I had a bunch of inexpensive finesse combos for my winter fishing. After a few months of use, I’d notice the frames and bails begin to flex. I ignored the issue until one of my reel seats snapped in-half while fighting a 4-pound spotted bass. That fish would have won me some much-needed textbook money. 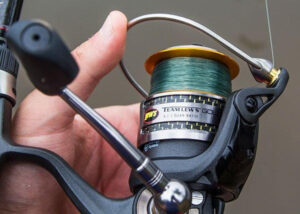 Thankfully, the Lew’s Team Gold Carbon Spinning Reel is built like a tank. It has a lightweight Carbon body and side cover that proves very durable. When fighting a fish, you won’t feel any flex whatsoeverâ€”you’ll feel in control of the fight. The bail opens and closes smoothly and doesn’t wiggle loose when under tension.

If you’re thinking about getting a new spinning reel, I absolutely recommend the Lew’s Team Gold Carbon Spinning Reel. It’s priced at $129.99 but performs like some of my much more expensive spinning reels. 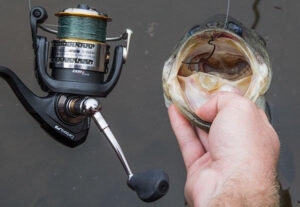