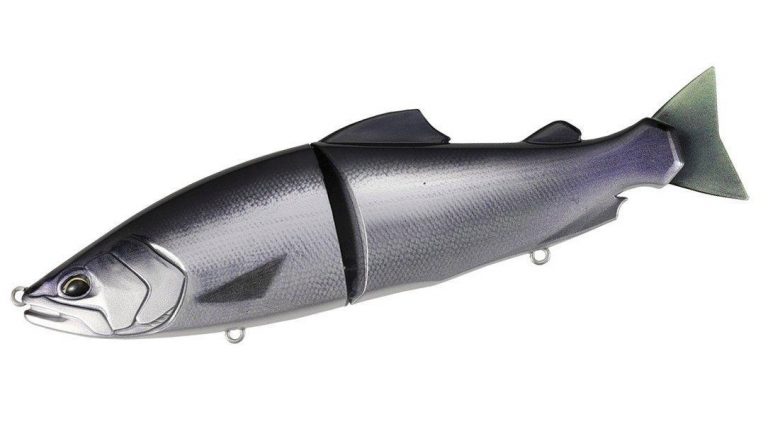 I’m a swimbait addict. Don Moorman started me on this path, so I blame him mostly. I’m eat up with everything about them. I can be completely happy chunking one all day and generally get a lot of bites others won’t ever get. So that’s cool. But I’m always excited to try another big swimbait.

I’ve had the DUO Realis Onimasu glide bait swimbaits since last July. And I’ve had a lot of fun fishing with them. I thought I would share some of what I’ve learned about these baits. 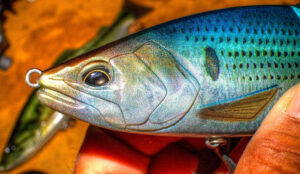 The details on the Onimasu

The Onimasu was designed by CEO and chief designer for DUO, Mr. Masahiro Adachi. He is a legendary lure maker in Japan. I spoke briefly with him at ICAST last year when they were launching the Codename Promethus Project that has now come to be known as the Onimasu. He does not start with AUTO CAD and 3D Printing when designing baits. He designs all the baits from the ground up by carving wood. He perfects the shapes and the intricate detailing and then works on the actions, balances and more through several prototypes.

The single joint gives it a nice S-swim motion that is the signature of good glide baits. The Onimasu however is made to fish a little faster and in more tournament fishing situations. Around docks, along shallow cover, over deep clear water trees and other suspending locations fish like to frequent.

One trick the David Swendseid of DUO gave me was to put a small rubber band around the joint. It makes the bait swim with a smaller S-patter and tighter movement and can be fished a lot faster. 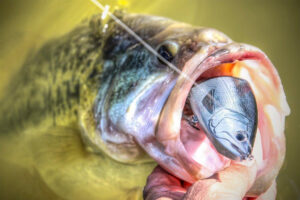 My experiences fishing the Onimasu

I’ve been able to take the Onimasu to a few different lakes through the fall, spring and summer months to see the various applications I could put it to work. I will say the most impressive thing with this bait is how well it exposes big bass in clear water. I’ve had so many follows besides the fish I’ve caught.

The bait displays a nice enticing side to side action. On the quick reel and pause and pull it ducks, darts and glides off to the side nicely. With gentle rod twitches, you can actually make the bait turn and look behind it and then reverse direction. I’ve had some good success working it a lot like a jerkbait. With straight reeling and intermittent small twitches that cause the bait to duck and dart and change its directions.

I’ve been playing with a technique with this bait on the ledges, that I’m not quite ready to divulge, but I can say the bait has a lot of possibilities beyond just fishing in small clear lakes that house giant bass. I’ve caught bass that weighed 2 pounds on it and a few that went more than 6 pounds.

I get asked a lot about glide baits. I’m certainly not the master of them by any stretch. But we’re trying to add more about fishing this style of the swimbaits. What I liked about the Onimasu was it did two things for anglers looking to get into throwing big glide baits.

First, it brought the price down to a reasonable range at $45. That is a lot for a fishing lure, but take a look at the other glide baits out there, and $45 is very affordable for an 8-inch, nearly 3-ounce glide bait. Secondly, it has an action and size that fits a lot of fishing situations and can be employed in more tournament situations than some of the oversized glide baits. 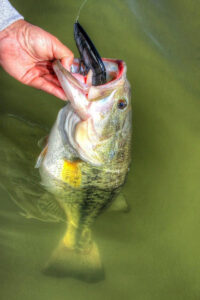 So it can get you a big bite. It can expose fish to you during practice and it can be fished on your existing heavy tackle. I’ve been throwing mine around on a Megabass Levante Leviathan and iRod Swim Jr., but you could throw it on a heavy action flipping stick in a pinch.

The colors are great on these baits. Very detailed, with finishes that reflect and mimic baitfish sheens. They are more production looking glide baits than some of the more handmade looking baits although they originated from a handmade design.

Currently the DUO Onimasu comes in one size and six colorsâ€”two trout colors, two shad looking patterns, a perch pattern and a baby bass pattern. It retails for $45 and you can check them out at TackleWarehouse.com and retailers that carry DUO products. Check out this video of the unique glide bait underwater: